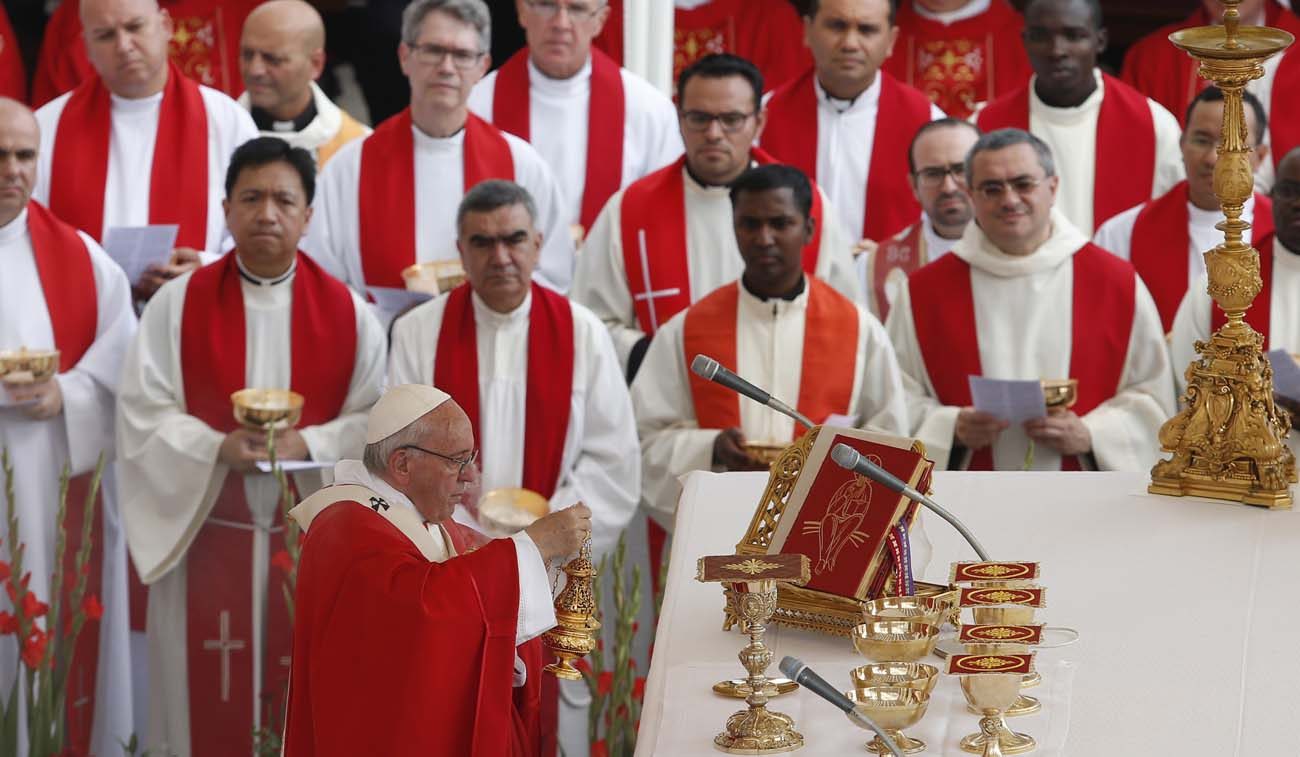 Pope Francis uses incense as he celebrates Mass marking the feast of Sts. Peter and Paul in St. Peter's Square at the Vatican June 29. The pope has spoke of a "healthy decentralization" in the Catholic Church and has made several decisions toward this goal. (CNS photo/Paul Haring)

VATICAN CITY (CNS) — Pope Francis talks about the need for a “healthy decentralization” in the Catholic Church, but how that should look and work has been a topic of debate since the Second Vatican Council.

The discussion often centers on how people describe the way the church experiences and ensures its unity around the globe: For example, by focusing on a strong, decision-making central authority, that helps unites the parts to the whole or by describing the church as a communion where unity is found in sharing, cooperative relationships among the diversity of local churches.

“The key thing” in striving for a healthy balance and reform, one Vatican official said, is to avoid a business-management idea of decentralization and “embed theology back into the term.” In other words, it’s not about a cold transfer of power, but an emphasis on collegiality and collaboration.

Bishop Paul Tighe, adjunct secretary of the Pontifical Council for Culture, told Catholic News Service, “the model is the hub,” with the pope and his assistants in the Curia at the center, always connected to the local churches, which are the first to encounter new situations and the first to respond.

“The Vatican is in contact with those different churches,” not as the problem-solver, but to “put them in contact with other churches” that have been dealing with the same or similar issues, so they can share ideas and best practices, and avoid reinventing the wheel, he said.

“Rome has that ability to have that overview” because it is “a point of contact. It’s not centralizing, but building a bond of communion” between churches and church leaders at local, regional and national levels, he said.

“People see the church as a hierarchical, monolithic structure. But it is much richer than that,” he said.

Australian Archbishop Mark Coleridge of Brisbane told CNS that people are used to hearing “the claim that the unity of the church doesn’t mean uniformity, and much of what Pope Francis has done and is doing is simply moving beyond the rhetoric to give some reality to that claim,” for example, in his naming of new cardinals from very diverse parts of the world.

“There may be some danger of fragmentation in passing more authority to local churches and to bishops’ conferences, but the Holy See and especially the Petrine ministry is the guarantor that a healthy decentralization doesn’t become an unhealthy fragmentation,” he said in an email response to questions.

The archbishop, who chairs the Australian Catholic Bishops’ Conference’s commission for evangelization and was a member of the Synod of Bishops on the family in Rome in 2015, said healthy cooperation between the Holy See and bishops requires co-responsibility.

For example, Pope Francis’ new motu proprio, “Magnum Principium,” on guiding future liturgical translations “is an attempt by the pope to restore the balance between the bishops and the Holy See in line with the provisions of Vatican II and in the light of experience since the council. It’s a document driven not by ideology but by theology, and its intent is clearly pastoral.”

A “good liturgical translation” holds the balance between the doctrinal and pastoral, he said, and that requires responsible cooperation among bishops and between bishops’ conferences and the Holy See.

“It does mean that the bishops will have to work hard at shaping a new language, drawing on the work of experts, of course, but maintaining control of the process and working trustfully with the Holy See to ensure that the communion of the church and her fidelity to doctrine are not compromised,” he said. “This will produce variety, certainly, but that doesn’t necessarily mean disunity.”

Retired Pope Benedict XVI said he, too, “always wished that the local churches be the most autonomous and lively possible, without needing assistance from Rome,” he said in the book-length interview, “Last Testament,” published in 2016.

During the Synod of Bishops on the role of the bishop in 2001, he endorsed greater responsibility for bishops as envisioned by the Second Vatican Council and spoke, to great applause, on the bishops’ duty to govern and to judge and correct doctrinal error in their own dioceses.

When that happens, then-Cardinal Joseph Ratzinger — at that time head of the Congregation for the Doctrine of the Faith — told the synod of bishops, “the so-desired decentralization happens automatically.”

At the end of that synod, he had stressed that unity was brought about by a harmonious unity of purpose, with a greater focus on Christ and the need to move “forward together to announce Christ to a world that needs a new proclamation of Christ and the Gospel.”

Neglecting those essential tasks because of too much attention to secondary things like internal church structures and organization has been “a way to strangle the life of the church,” he had said.

“The world’s first need is to know Christ. If it doesn’t, all the rest will not function,” he said.

NEXT: Circus performers have a ‘joyful’ vocation, pope says