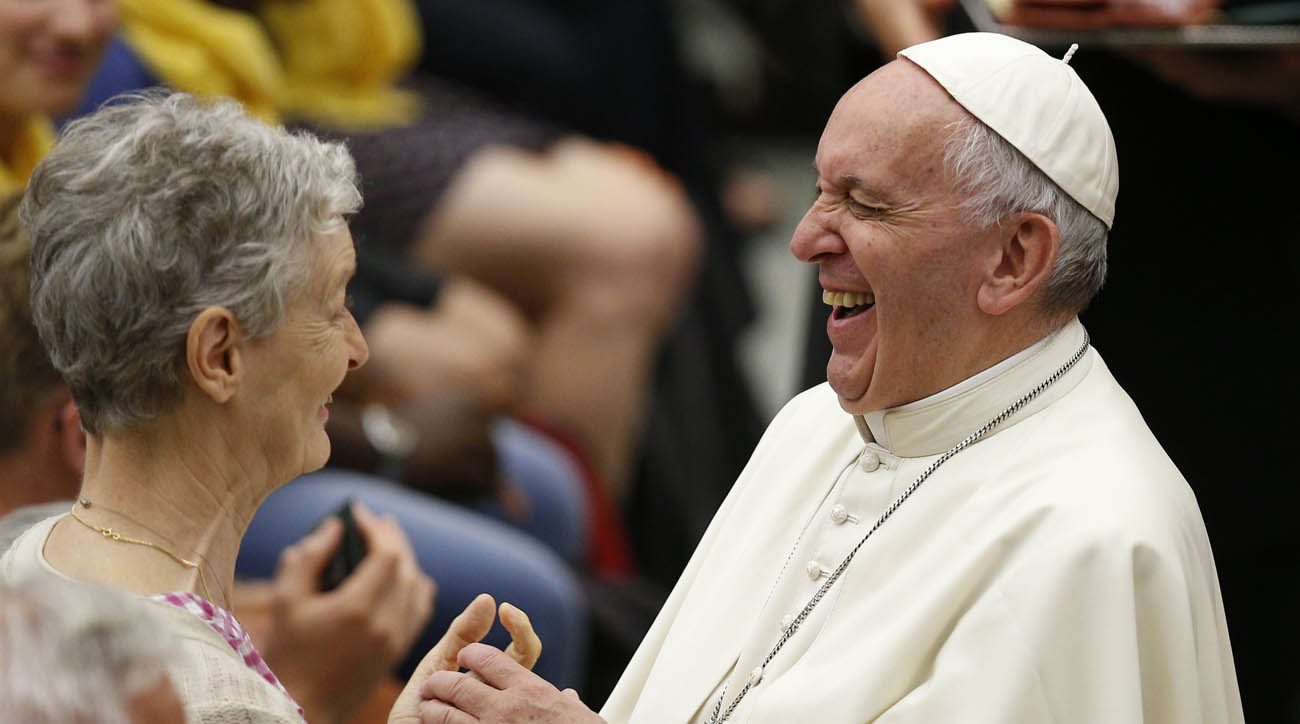 Pope Francis laughs with a woman at the Vatican July 6. A new book offers insight into the pope's philosophy of communication. (CNS photo/Paul Haring)

VATICAN CITY (CNS) — When Pope Francis sat down with an expert in media and communication for a yearlong series of interviews, those discussions offered some fascinating insight into the pope’s philosophy of communication and suggested guidelines for the media.

The pope also explained what motivates his signature style of spontaneously speaking and engaging with people, including the papal plane’s “lion’s den” of journalists, despite knowing the risks and slip-ups that might result.

“When I was a student, an old Jesuit gave me this advice: ‘Listen up, if you want to get ahead, well, think clearly and speak obscurely.’ But I’ve been trying to speak clearly,” the pope told the book’s author, Dominique Wolton, who immediately noted, “Then you must have run into many problems. …”

But the pope found plenty to say to Wolton, who compiled the 12 interviews in the book, “Politique et Societe” (“Politics and Society”). The publisher, Editions de l’Observatoire, released the book in French Sept. 6 and was in the process of negotiating English-language rights.

Wolton, a 70-year-old French sociologist who specializes in communication, globalization and cultural diversity, said he wanted to meet and talk shop with a man he sees as “one as the most exceptional intellectual and religious figures in the world.”

As the author discovers, over time with increased excitement, that many of his own views closely mirror those of the pope — that the media must safeguard human dignity — he eagerly prods the pope to speak out more and write an encyclical on the challenges culture and technology pose to communication today.

“Maybe,” the pope replied, given that “there are very serious problems,” such as today’s suppers in which family members are each plugged into their own device, silently eating their meal.

Pope Francis said that, in his experience, the media and communicators tend to “catch what suits them,” and they are prone to the following four dangers:

— Disinformation, which offers only some or partial facts and leads people to make mistaken judgments about reality.

— Calumny and “tarnishing others,” which, like the “Barber of Seville” says, builds from a light wind into a destructive storm.

— Defamation by publicizing a repentant, reformed person’s past mistakes in order to undermine his or her authority.

— A “sad, unpleasant, nasty disease” of “wallowing in the most risque, vicious and voyeuristic stories and references” possible.

However, “It is possible to do good things,” he said, offering a multitude of suggestions and guidelines. Real communication, he said, requires:

— Being able to “waste” time by giving it freely. A priest, for example, who is too busy to be available and talk, is “anti-communication and anti-Gospel.” Jesus was always very busy, but he never saw requests as a bother and always insisted on helping.

— Humility, because it takes humility to be able to listen to people, and it opens the door to communication by creating a sense of being on equal footing. “If you want to communicate only from the top down, you will fail.”

— Never seeing people as adjectives, but speaking to them as “nouns,” as a man, a woman, a human being. Finding things in common to talk about and listening with respect despite different points of view.

— “Joy and lightness,” because it’s not enough to tell the truth if a text or discourse is “terribly boring.”

— Building a bridge by shaking hands, hugging, crying, eating, drinking together. In Argentina when people want to talk, they say, “Let’s get a coffee,” because real communication cannot happen “without making a bridge, and without eating. Words alone are not enough.”

— “Rediscovering the sense of touch,” because it is the most important of the five senses. “Perfect communication” doesn’t require the latest technology, it can be just giving a hand or a kiss “without words.”

— Building relationships with concrete gestures of charity, which is why “the church communicates best when it does so with the poor and the sick,” when it is following the path of the beatitudes. “It is very interesting, communication is at work in the beatitudes. If you read them carefully, these are also the rules for better communication.”

Pope Francis said that the best communicator of all is God, because communication requires moving outward and toward others.

“Because man is made in God’s image, he must lower himself for there to be true communication,” to be “on par with another,” not because the other is inferior, but as “an act of humility, of freedom.”

This free outpouring of words and “primordial gestures” means that “communication always has something messy about it. Deep down, it increases spontaneity,” he said.

When asked whether he was worried his fondness for speaking informally and off-the-cuff so much posed any risks to his official pronouncements or his credibility, the pope said, “I believe prudence is necessary, not ‘cold’ prudence,” but just enough to know “how far we should go.”

But he said, “I myself have made mistakes. I was wrong two or three times in the way I said things” on the plane with journalists.

“The plane is dangerous,” Wolton replied, because the journalists are “looking for what is forbidden. They like that.”

“What I can say, I say. And some are appalled, that is true,” the pope said.

Asked whether knowing whatever he says will go global caused him any distress, the pope said while he does not feel anxious, “there’s a lot of pressure.”

“When I get on the plane with the journalists I feel as if I am descending into the lion’s den. And I begin by praying, then I try to be very clear,” but there have been some “missteps,” he said, without specifying what.

The pope’s vision of communication parallels his overall vision of always needing to be in movement, meeting others, opening doors, sometimes taking wrong turns, but always walking, because a person who is not on a journey “is a mummy, a museum piece.”

“It’s hard to communicate, but we communicate despite it all. I say this because we must not reject people who are on the move, since it would be to reject communication.”

NEXT: At final Mass in Colombia, pope calls for change of culture