At final Mass in Colombia, pope calls for change of culture 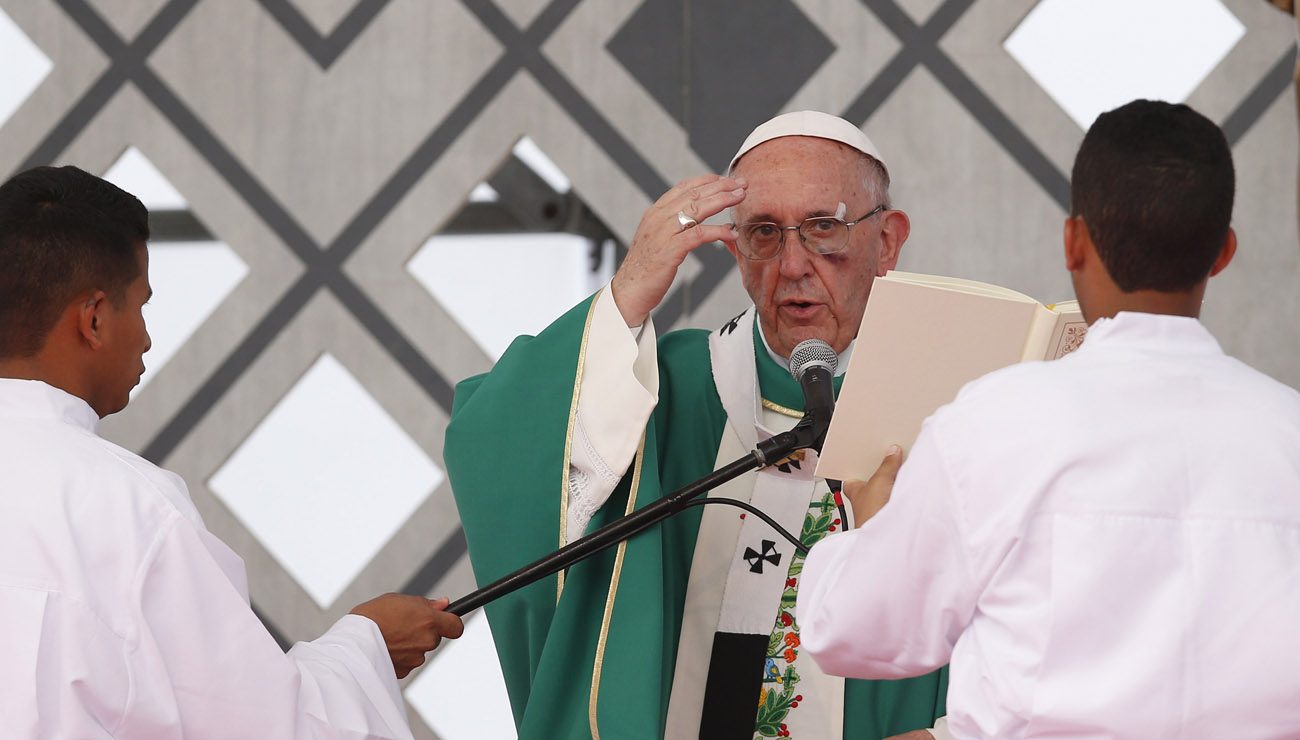 CARTAGENA, Colombia (CNS) — Pope Francis capped a five-day trip to Colombia with a call for culture change in a country attempting to pursue a path of peace and reconciliation after decades of armed conflict and centuries of social exclusion.

The pope issued his call in Cartagena, on Colombia’s Caribbean Coast, where he remembered St. Peter Claver and urged the country to follow the example set centuries earlier by the priest, who tended to slaves arriving on ships by showing kind gestures and dignity.

“We are required to generate ‘from below’ a change in culture, so we respond to the culture of death and violence with the culture of life and encounter,” Pope Francis said Sept. 10, prior to returning to Rome.

“How many times have we ‘normalized’ the logic of violence and social exclusion, without prophetically raising our hands or voices?” Pope Francis asked. “Alongside St. Peter Claver were thousands of Christians, many of them consecrated, but only a handful started a countercultural movement of encounter.”

The final Mass, celebrated at the docks and full of up-tempo music and worship, reiterated many of the themes Pope Francis raised throughout his trip to Colombia: peace, reconciliation and social inclusion, to name but three.

He also invoked the motto for his trip, “Let’s take the first step.” The motto speaks to the collective action needed pull together a country polarized by class divisions, social inequality and how to implement a recently approved peace accord. The accord between the government and guerrilla group, the Revolutionary Armed Forces of Colombia, or FARC, is not universally popular, though the pursuit of peace is.

But Pope Francis pleaded with Colombians to play their personal part in achieving peace and for Catholics to set the example by living their Christian values.

“We pray to fulfil the theme of this visit: ‘Let us take the first step!’ And may this first step be in a common direction. To ‘take the first step’ is, above all, to go out and meet others, with Christ the Lord,” Pope Francis said.

“If Colombia wants a stable and lasting peace, it must urgently take a step in this direction, which is that of the common good, of equity, of justice, of respect for human nature and its demands,” he continued.

“Only if we help to untie the knots of violence will we unravel the complex threads of disagreements. The Lord is able to untie that which seems impossible to us, and he has promised to accompany us to the end of time and will bring to fruition all our efforts.”

During his Sept. 6-10 visit, Pope Francis heard the voice of victims and victimizers. At the Mass in Cartagena, he departed from his prepared remarks to denounce the illegal drug business, which has spurred violence in the Andean region — where coca is grown — and beyond.

“I strongly condemn this scourge which has put an end to so many lives and is sustained by unscrupulous men,” Pope Francis said. “I’m making a call so that we explore all ways to end narcotics trafficking. The only thing it has done is sow death all over the place, truncating so many hopes and destroying so many families.”

Pope Francis titled his homily, “Dignity of the person and human rights,” and he listed a litany of indignities harming the country and much of the region: money laundering and financial speculation, resource exploitation and destruction of the environment, along with “The overlooked tragedy of migrants.”

He again spoke of the necessity of seeking truth and providing justice for those wronged in Colombia to reconcile its recent past, which is marred by an armed conflict leaving 220,000 dead and millions more displaced.

“Deep historic wounds necessarily require moments where justice is done, where victims are given the opportunity to know the truth, where damage is adequately repaired and clear commitments are made to avoid repeating those crimes,” he said.

“No collective process excuses us from the challenge of meeting, clarifying, forgiving.”

NEXT: Look for vocations in imperfect places, pope tells Colombians