Mexicans respond to quake with generosity, concern about politicians 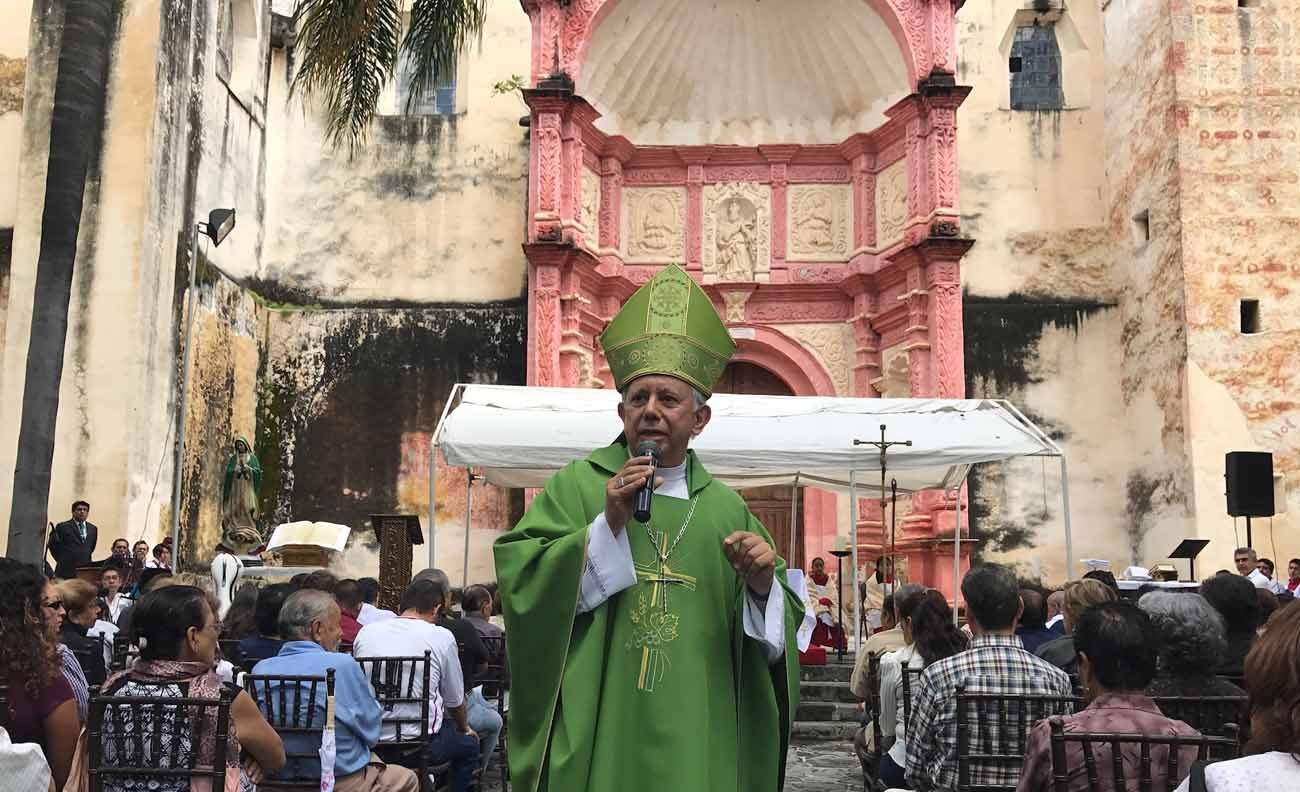 Bishop Ramon Castro Castro of Cuernavaca, Mexico, celebrates Mass Sept. 24 outside the city's cathedral, which dates to the 1500s and was badly damaged by the Sept. 19 earthquake in Mexico. (CNS photo/David Agren)

Some of those donations being trucked into Morelos state, just south of Mexico City, were stopped, however, and diverted to government-run collection centers, said Bishop Ramon Castro Castro of Cuernavaca. He sounded the alarm in a short video — and set off a scandal.

“This surpasses any minimal moral logic,” Bishop Castro said in an online video, which described how three trucks with Caritas supplies were detained, then diverted by police. “I ask those who have the authority and ability to stop this to do so.”

Bishop Castro’s video went viral in Mexico, where people have responded to the earthquake with generosity and rushed to rescue those trapped in rubble, even risking their own lives and working without sleep in the process.

But his comments have come to embody the country’s fatigue with politicians, some of whom have been chased away or jeered by irate locals while visiting disaster areas. Some politicians have put their promotion or logos on supplies or made assistance in poor areas conditional on recipients showing an electoral identification.

Mexico’s Catholic leaders have joined in the condemnation of the country’s political class, while also accompanying a population often distrustful of their authorities and depending on each other in a time of crisis. In a homily Sept. 24, Bishop Castro called for citizen vigilance to avoid corruption and crass politicking.

“I would ask the government to honestly distribute this money, this disaster fund to reconstruct the country and that no percentage of it ends up in anybody’s pocket. That we as citizens observe and denounce any abuse,” Bishop Castro said in a Sept. 24 homily.

“We hope this tragedy serves to humanize our political class,” added an editorial published Sept. 24 in the Archdiocese of Mexico City publication Desde la Fe. “Mexicans are fed up with the excess of politicians and public officials, the corruption, scandalous salaries, benefits and frivolities … politicians’ ostentatiousness, which insults the more 50 million poor people living in our troubled country.”

The magnitude 7.1 earthquake struck central Mexico especially hard, with the epicenter about 45 miles southeast of Mexico City on the border area of Morelos and Puebla states. In Morelos — served by the Diocese of Cuernavaca — at least 73 people died. Some towns reported more than half the homes there damaged or destroyed.

The citizen solidarity and generosity in Morelos has been overshadowed somewhat by concerns state officials and politicians are trying to use the tragedy for political purposes and to promote themselves ahead of the 2018 elections.

To prevent abuse, Caritas Mexico has developed an application that allows people to identify the disaster areas with the greatest needs, but also to track the delivery of donated supplies. 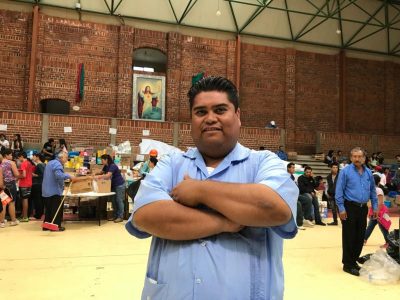 Father Israel Vazquez, seminary director for the Diocese of Cuernavaca, Mexico, poses for a photo Sept. 24 in the seminary gym being used for relief goods for victims of the Sept. 19 earthquake. Some Caritas donations have been stopped and diverted to government-run collection centers. (CNS photo/David Agren)

The application, still in its test phase, allowed the Diocese of Cuernavaca to spot a Caritas truck carrying relief supplies from northern Mexico being stopped by state police as it entered Morelos. Caritas officials rushed to the scene so the truck would be allowed to continue to its original destination, said Oscar Cruz, diocesan communications director.

Bishop Castro told Catholic News Service the Morelos government issued a directive to have all aid arriving from out-of-state distributed by state agencies.

“They want to distribute (church aid) because later they put a label on it, ‘Government of Morelos,'” he said. “This is support from many other people, and (labeling it otherwise is) a total lack of honesty.”

The diocese reports 111 parishes were either damaged or destroyed, while 13 parish residences were left uninhabitable, leaving those priests homeless.

“Some of these churches are 400 years old,” Bishop Castro said at the Cuernavaca cathedral, which dates back to the 1500s. The cathedral was undergoing renovations, but suffered such damage that services could no longer be celebrated inside. “These buildings were still standing after previous earthquakes, storms, but didn’t survive this. That tells you how powerful this was.”

The Diocese of Cuernavaca has focused on “accompanying people,” Bishop Castro said, meaning Masses and funerals were celebrated at all parishes, outside of the buildings.

The diocese also established three collection centers, which were swamped with donations and offers of assistance. One of the centers in the diocesan seminary had as many as 800 volunteers working at a time.

“People are showing a lot of solidarity,” said Father Israel Vazquez, seminary director. He said people sent donations to the church because they thought the church would distribute the aid to those most in need.

Some in the state went straight to the disaster areas. Otilia Diaz and four relatives collected clothing and shoes they no longer needed and drove to the town of Jojutla, which was hit especially hard.

“We collected all we could find in the house to give,” she said. “One woman asked us for shoes because her husband only had sandals and was clearing the rubble of their home.”

In a Mass celebrated outdoors for the victims of the earthquake, Bishop Castro called for change after the earthquake and expressed hopes the disaster — with its expressions of solidarity and demands for better from Mexico’s political class — would lead to a better country.