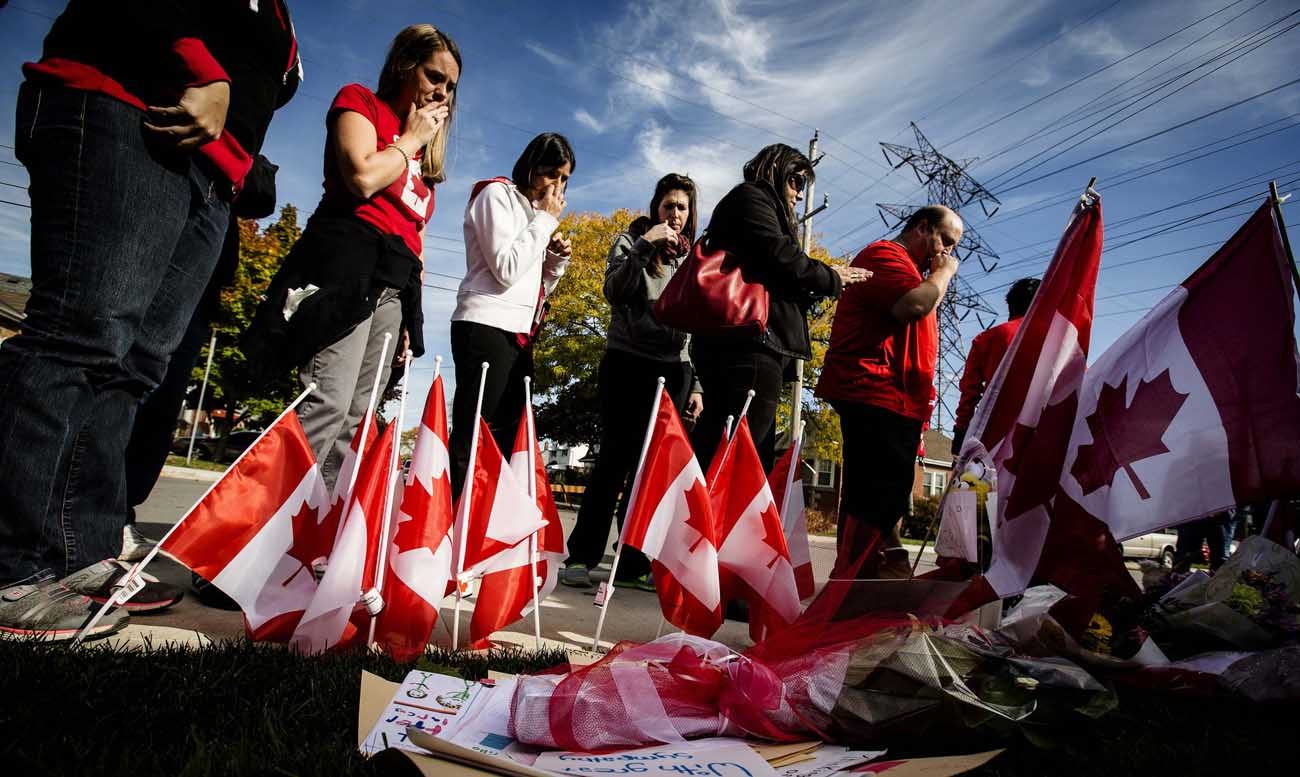 Workers from St. Eugene Catholic School in Hamilton, Ontario, pay respects at a makeshift memorial outside the home of Cpl. Nathan Cirillo in Hamilton in this 2014 photo. Cirillo was killed during an Oct. 22, 2014, shooting incident at the Canada War Memorial in Ottawa. His son attended St. Eugene. (CNS photo/Mark Blinch, Reuters)

OTTAWA, Ontario (CNS) — Whether it’s a train crash, a building collapse or a pandemic, Ottawa Hospital is ready to provide spiritual help through a team of volunteers for those affected.

The hospital says its Emergency Spiritual Care Assistance Team is the first of its kind in North America. Its recently published guide has been requested by more than 25 other hospitals in Canada and the United States, said Maronite Father Nicolas El-Kada, team leader and the hospital’s clinical pastoral education coordinator.

Father El-Kada said research shows that for each medical casualty in a disaster or emergency, there are anywhere from four to 500 “psycho-social spiritual casualties who need spiritual support.”

“A disaster is always chaotic,” said Father El-Kada, adding that training can help people respond to “high-demand” challenges. “Everyone is screaming for help. How are you going to deal with it?

“A crowd of people might all be in need of support for medical, psychological, social and/or spiritual needs,” he said.

The ESCAT team, which includes hospital chaplains, spiritual leaders and volunteers from a range of religious faiths, is trained to intervene as a group and not as individuals, Father El-Kada said. They all agree to make themselves available in an emergency; each takes three days of training.

The hospital started to develop the program in 2009 when the H1N1 virus threatened a worldwide pandemic.

But by the time H1N1 petered out, the ESCAT planners decided not to wait for another emergency or disaster before building the program into what it is today.

ESCAT has been activated three times: in 2011, after an explosion at a local Catholic high school killed a student; in 2013, after a double-decker bus crashed into a train, killing six and injuring many more; and in 2014, after a shooter killed a soldier at the War Memorial, then rampaged through Centre Block on Parliament Hill.

The training for the team includes learning about the phases of an emergency and what spiritual interventions are appropriate at each stage. As well, trainees learn the language spoken by first responders — firefighters, police, the army, various levels of government — to facilitate communication and a more effective intervention, he said.

The ESCAT volunteers also learn what symptoms — such as anxiety, fear, distress, feeling numb and confusion — are common among people who have experienced a disaster and how to identify “red flags” if a person’s reaction is extreme, which could become impairing or lead to post-traumatic stress disorder or an anxiety disorder in the future, Father El-Kada said.

Part of the course involves dealing with a mock disaster such as a building collapse, and asking the trainees to imagine how they would handle various scenarios, such as someone becoming angry and violent after hearing he or she has lost a loved one.

“An intervention in a disaster situation is different than the intervention with someone going through a life struggle,” he said. “A wrong intervention might worsen the survivor’s condition. We talk about psychological first aid.”

“These interventions need to be tailored to the needs of each survivor,” he said.

A key is helping people find their own strength and recovering their resilience, he said. Sometimes when a person experiences a disaster, they go into shock. “We think we have lost it all, when in fact we haven’t lost it all.”

Some of that involves helping people “find a source of calmness and connectedness,” and to help them connect with their own sense of transcendental reality, Father El-Kada said. “In the Catholic context, I would say God.”

ESCAT has a box of sacred objects and books, such as Bibles, rosary beads, Korans, prayer cards, spiritual medals and religious objects to help survivors find that “source of calmness.”