Philippine priest, kidnapped in May, freed 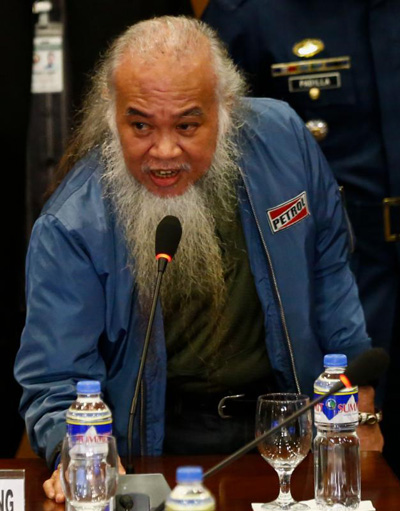 Father Teresito Soganub gives a statement Sept. 18 during a news conference in Manila, Philippines. Father Soganub was released after being held captive by the Maute terror since May 23. (CNS photo/Rolex Dela Pena, EPA)

MANILA, Philippines (CNS) — A senior Philippine priest taken hostage by Islamic State-inspired militants in the southern city of Marawi has been freed after almost four months of captivity.

Father Teresito Soganub, vicar general of the Prelature of Marawi, told a news conference in Manila that he was doing as well as could be expected following his ordeal, reported ucanews.com.

“I am physically strong and sound,” Father Soganub said at Camp Aguinaldo, the national military headquarters.

He asked Filipinos to pray for other remaining hostages before military doctors whisked him off for a medical checkup.

A local Maute terror group linked to Islamic State captured Father Soganub and other church workers at Marawi cathedral May 23, the first day of fighting in the Islamic city.

As well as taking around 30 people from the cathedral offices, they also tore down and desecrated icons and other sacred images and tried to set fire to the building.

Father Soganub appeared in a video a week after his capture, appealing to Philippine President Rodrigo Duterte to withdraw troops and cease airstrikes against rebels.

He also said that the militants had more than 200 hostages. In August, the military said the number of hostages was down to around 40.

Gen. Eduardo Ano, armed forces chief of staff, said Father Soganub told him the hostages held with him were fed well and not harmed, but he could not vouch for treatment of other captives not in their group.

On Sept. 18, military officials said nearly 900 people have died in the four-month conflict.

NEXT: Salesian priest recounts harrowing tale of his capture, liberation