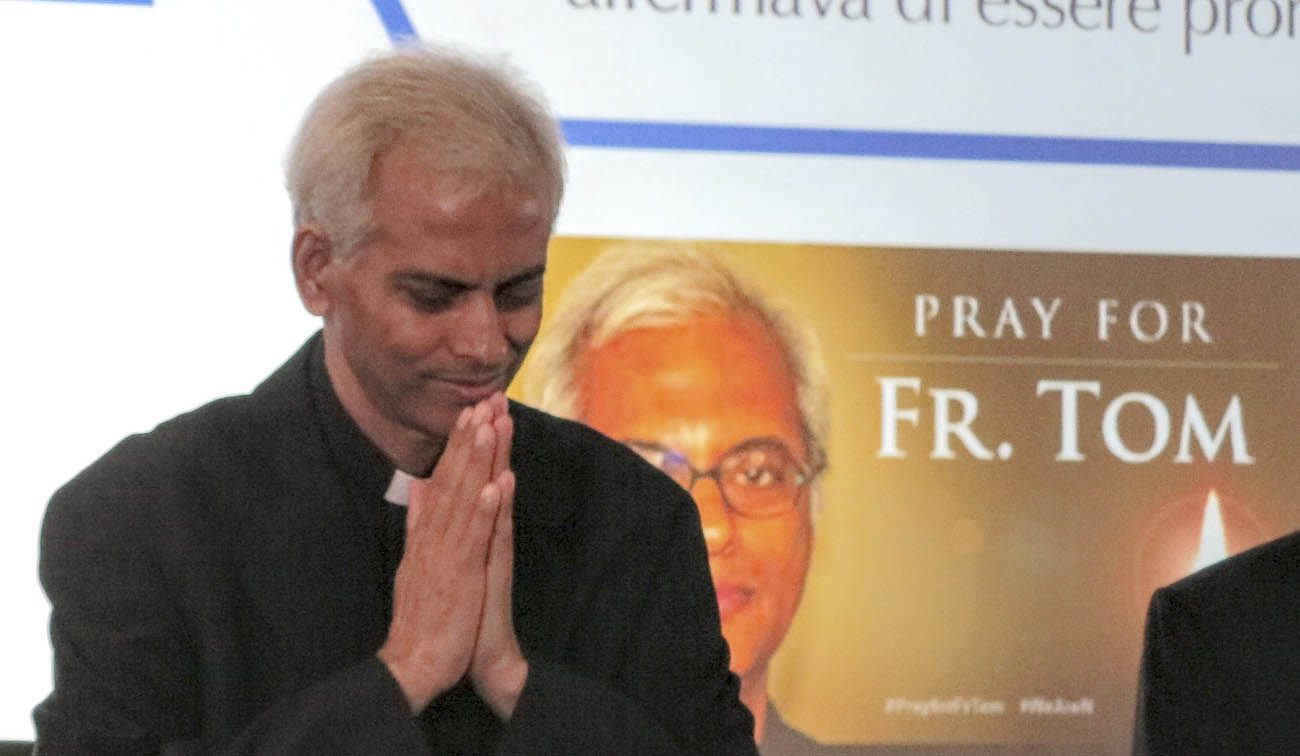 Salesian Father Tom Uzhunnalil, who was released from captivity Sept. 12, greets journalists as he arrives for a news conference in Rome Sept. 16. Father Uzhunnalil was abducted during an attack on a charity care home in Yemen in March 2016 and imprisoned for 18 months. (CNS photo/Junno Arocho Esteves)

ROME (CNS) — Salesian Father Tom Uzhunnalil was sitting in a room in an unknown location — one of several he had been relocated to during his 18-month imprisonment — when he received some unexpected news.

“Those who kept me came to where I slept (and said), ‘I bring you good news. We are sending you home. If you need to go to the bathroom, go. Take a shower, but quickly!'” Father Uzhunnalil told reporters Sept. 16 at the Salesian headquarters in Rome.

Seeing a group of Missionaries of Charity sisters seated at the news conference in Rome, Father Uzhunnalil expressed his condolences. However, the memory of the four sisters’ martyrdom still proved too difficult to bear.

Silence filled the room as the Salesian priest covered his eyes, tears streaming down his face while doing his utmost to hold back emotions that he thought he could contain.

“I thank God Almighty for this day, for keeping me safe, healthy, clear minded; my emotions were in control until now,” he said after regaining his composure.

“I don’t want to speak too much about the sisters because I get too emotional,” he said.

Although reports following his kidnapping suggested the attack was carried out by the so-called Islamic State, Father Uzhunnalil said his captors never identified themselves.

Knowing very little Arabic, Father Uzhunnalil said he spoke to the militants with the few words he knew: “Ana hindiin” (“I am Indian”). To this day, the Indian priest still wonders why he was the only one spared in the slaughter.

“Why they did not kill me, why they didn’t tie my hands, I don’t know,” he said. “Perhaps they wanted some ransom or whatever it is. I only believe that maybe God had put that into their heads when I said, ‘I am Indian,’ and they made me sit there while they killed the others, the sisters.”

After leaving him in the trunk of the car, the militants ransacked the chapel taking the tabernacle, wrapping it with the altar linen and placing it near the kidnapped priest. With his hands unbound, Father Uzhunnalil carefully moved the linen and found “four or five small hosts,” which he kept to celebrate the Eucharist the first few days of his capture.

After his short supply ran out, he said, he continued reciting the Mass prayers when alone despite not having bread and wine.

“I peacefully was able to say my Eucharist all from memory, although bread and wine wasn’t available. But I prayed to God to give me those items spiritually,” Father Uzhunnalil said.

He spent most of his days praying for the pope, his bishop, his Salesian brothers, and “certainly those sisters, all those persons whom God had called” on the day of his abduction.

Father Uzhunnalil said he found consolation in the words of a hymn, “One day at a time, sweet Jesus.”

“Just give me the strength to do every day what I have to do. Yesterday’s gone, sweet Jesus, and tomorrow may never be mine. Lord, help me today, show me the way, one day at a time,” he would sing to himself in the solitude of his room.

On Sept. 11, Father Uzhunnalil was given the news of his liberation. After traveling for hours blindfolded, the priest along with two of his captors waited in the car.

Several hours later, his captors told him “some arrangements weren’t done” and they headed back.

Not understanding the church’s teaching on the Holy Trinity and the “unity of God in three persons,” Father Uzhunnalil recalled, one of his captors said, “You might have prayed to the third God, now you must pray to the second God so tomorrow can go well.”

Returning to his cell, he slept briefly when he was rustled out of bed in the middle of the night Sept. 12 and taken on the same long ride, his head once again covered. He was then moved to another vehicle where a person pulled up his picture on a cell phone and asked the priest, “Is this you?”

After confirming his identity, the driver drove for more than a day through the desert and told him: “Now you are free, now you are safe.”

Father Uzhunnalil was then taken to the Omani capital of Moscat where he received medical treatment, fresh clothes, and a shaving kit.

While he knows few details about arrangements for his release, Father Uzhunnalil expressed his gratitude to those who helped secure his liberation, including Sultan Qaboos bin Said al Said of Oman, the government authorities of India, and the Vatican, including Pope Francis whom he met the day after his release.

As Pope Francis entered the room Sept. 13, the Salesian knelt before him and kissed his feet. Visibly moved by the gesture, the pope helped him up and kissed his hands.

Before blessing Father Uzhunnalil, the pope embraced him and said he would continue to pray for him as he had done during his imprisonment.

“In that meeting, the pope kissed my hand. I never deserved it,” he said. “I’m only grateful to God for his blessings, I’m sure he prayed much for me.”

Even his captors, Father Uzhunnalil said, knew of the pope’s efforts and inadvertently gave him a reason to hope.

NEXT: In Bolivia, when the water dries up, so does the economy