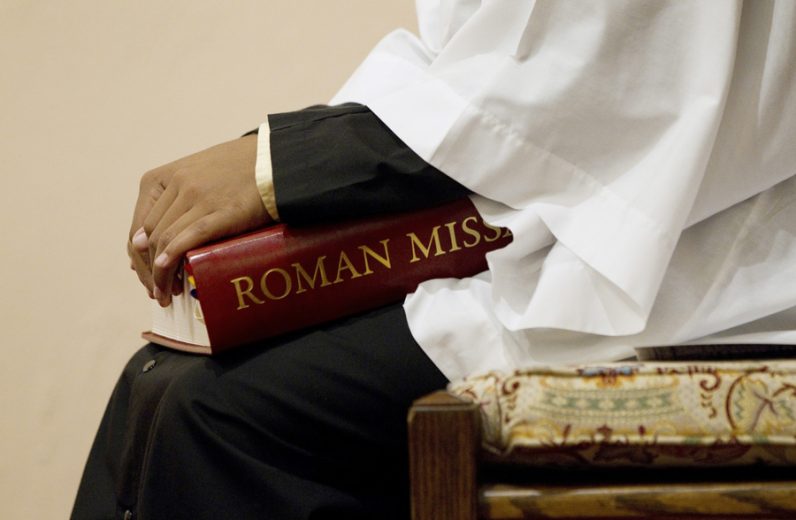 An altar server holds a copy of a Roman Missal during Mass in this 2011 file photo. (CNS photo/Nancy Phelan Wiechec)

MEDELLIN, Colombia (CNS) — In changes to the Code of Canon Law regarding translations of the Mass and other liturgical texts, Pope Francis highlighted respect for the responsibility of national and regional bishops’ conferences.

The changes, released by the Vatican Sept. 9 as Pope Francis was traveling in Colombia, noted the sometimes tense relationship between bishops’ conferences and the Congregation for Divine Worship and the Sacraments over translations of texts from Latin to the bishops’ local languages.

The heart of the document, which applies only to the Latin rite of the Catholic Church, changes two clauses in Canon 838 of the Code of Canon Law. The Vatican no longer will “review” translations submitted by bishops’ conferences, but will “recognize” them. And rather than being called to “prepare and publish” the translations, the bishops are to “approve and publish” them.

Archbishop Arthur Roche, secretary of the worship congregation, said under the new rules, the Vatican’s “confirmatio” of a translation is “ordinarily granted based on trust and confidence,” and “supposes a positive evaluation of the faithfulness and congruence of the texts produced with respect to the typical Latin text.”

Pope Francis made no announcement of immediate changes to the translations currently in use.

The document is titled “Magnum Principium” (“The Great Principle”) and refers to what Pope Francis called the “great principle” of the Second Vatican Council that the liturgy should be understood by the people at prayer, and therefore bishops were asked to prepare and approve translations of the texts.

Pope Francis did not overturn previous norms and documents on the principles that should inspire the various translations, but said they were “general guidelines,” which should continue to be followed to ensure “integrity and accurate faithfulness, especially in translating some texts of major importance in each liturgical book.”

However, the pope seemed to indicate a willingness to allow some space for the translation principle known as “dynamic equivalence,” which focuses on faithfully rendering the sense of a phrase rather than translating each individual word and even maintaining the original language’s syntax.

“While fidelity cannot always be judged by individual words but must be sought in the context of the whole communicative act and according to its literary genre,” the pope wrote, “nevertheless some particular terms must also be considered in the context of the entire Catholic faith, because each translation of texts must be congruent with sound doctrine.”

The pope said the changes would go into effect Oct. 1, and he ordered the Congregation for Divine Worship and the Sacraments to “modify its own ‘Regulations’ on the basis of the new discipline and help the episcopal conferences to fulfill their task as well as working to promote ever more the liturgical life of the Latin church.”

The greater oversight provided earlier by the Vatican was understandable, Pope Francis said, given the supreme importance of the Mass and other liturgies in the life of the church.

The main concerns, he said, were to preserve “the substantial unity of the Roman rite,” even without universal celebrations in Latin, but also to recognize that vernacular languages themselves could “become liturgical languages, standing out in a not-dissimilar way to liturgical Latin for their elegance of style and the profundity of their concepts with the aim of nourishing the faith.”

Another teaching of the Second Vatican Council that needed to be strengthened, he said, was a recognition of “the right and duty of episcopal conferences,” which are called to collaborate with the Vatican.