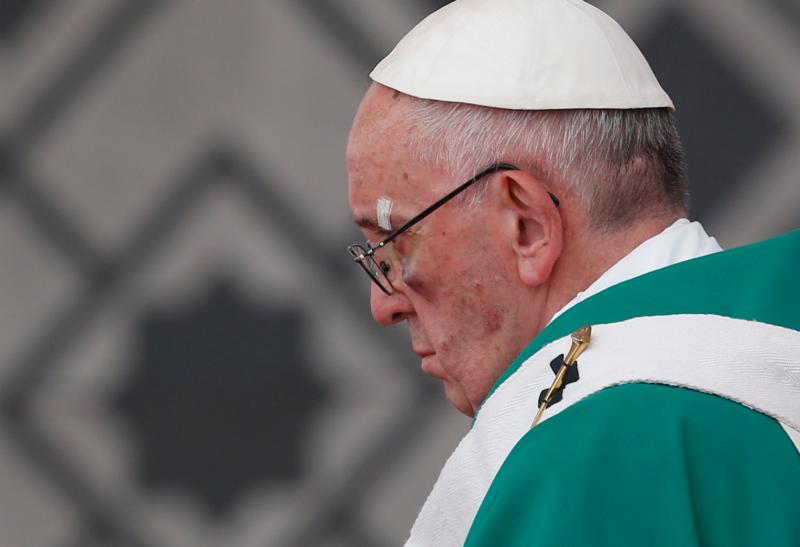 Pope Francis celebrates Mass at Contecar terminal in Cartagena, Colombia, in this Sept. 10, 2017, file photo. The Mass was the final big event during his five-day visit to the country. Earlier, the pope bumped his face when the popemobile braked suddenly. (CNS photo/Paul Haring)

Instead, those in places of authority and influence must “feel the pain of others, to make it our own, neither overlooking it or becoming inured to it,” the pope said in a Sept. 10 message to participants of the International Meeting of Prayer for Peace in the German cities of Munster and Osnabruck.

“We must never grow accustomed or indifferent to evil,” he said.

Among those addressing the Sept. 9-12 meeting, which was sponsored by the Sant’Egidio community, a Rome-based Catholic lay organization, were German Chancellor Angela Merkel and Sheik Ahmad el-Tayeb, the grand imam of al-Azhar University.

In his message, Pope Francis noted that the conference’s theme, “Paths for Peace,” highlighted the need to bring reconciliation to areas of conflict that have left “entire peoples plunged into a dark night of violence, without hope for a dawn of peace.”

Alongside political leaders, the pope said, religions must “respond to this thirst, to identify and, together with all men and women of goodwill, to pave tirelessly new paths of peace” through prayer and by humble, concrete and constructive efforts.

Religious leaders who share the ideals of nonviolence and compassion must encourage peace through “courageous humility and tenacious perseverance in prayer,” he said in his message, which was published in the Vatican newspaper, L’Osservatore Romano.

The path toward peace, he added, is not the one taken by “those who profane God’s name by spreading hatred; it has nothing to do with the bane of war, the folly of terrorism or the illusory force of arms.”

“As religious leaders, particularly at this present moment of history, we also have a special responsibility to be and to live as people of peace, bearing insistent witness that God detests war, that war is never holy, and that violence can never be perpetrated or justified in the name of God. We are likewise called to trouble consciences, to spread hope, to encourage and support peacemakers everywhere,” he said.

Not responding to the hate growing in the world, Pope Francis warned, runs “the risk of paralysis and resignation.” The peace gathering in Germany, however, represents a response of peace where “all stand beside one another.”

“Religions cannot desire anything less than peace, as they pray and serve, ever ready to help those hurt by life and oppressed by history, ever concerned to combat indifference and to promote paths of communion,” the pope said.

PREVIOUS: Grandparents say their role has never been more crucial than today