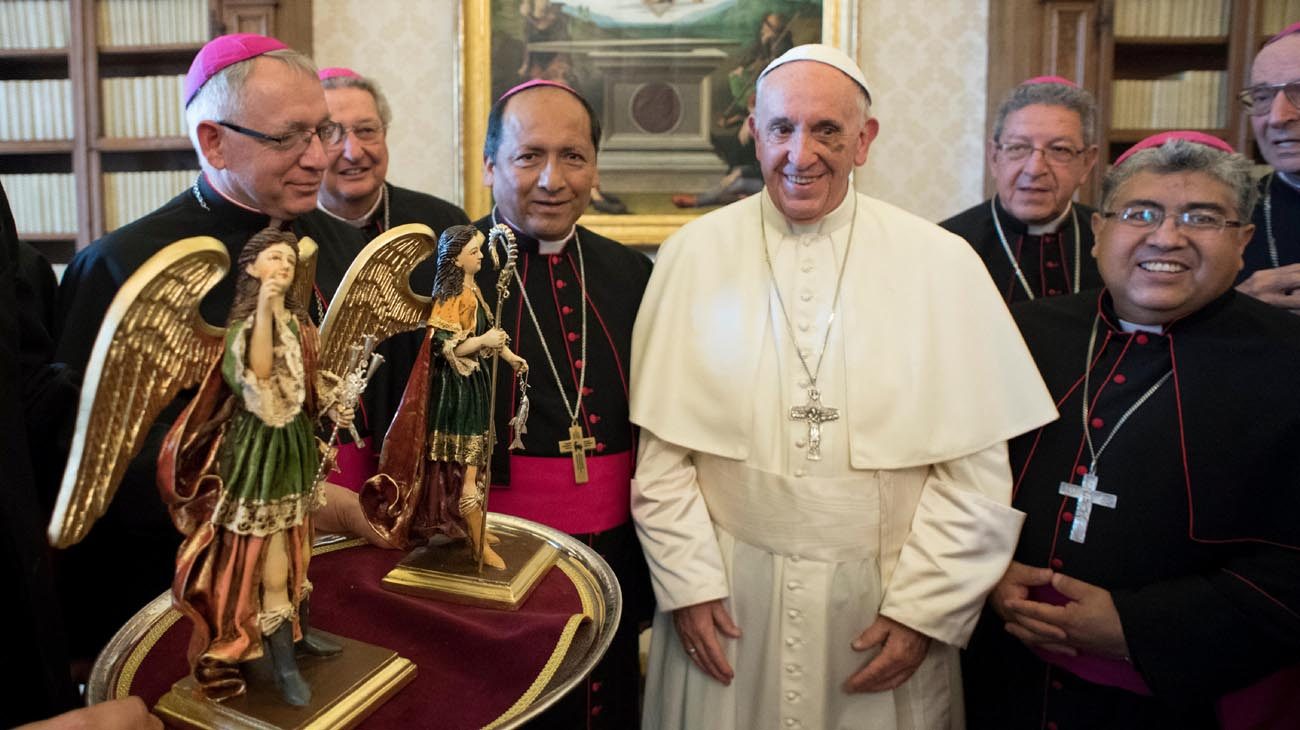 Pope Francis poses with members of the Bolivian bishops' conference during a Sept. 18 meeting at the Vatican. (CNS photo/L'Osservatore Romano)

VATICAN CITY (CNS) — Pope Francis urged the bishops of Bolivia to faithfully guide their flocks as breakaway groups comprised of former priests and seminarians are gaining ground in the country.

“They are schismatic groups that have arisen within the church and are not in communion with the pope or the bishops. Clearly, it is a challenge. The pope reiterated that it is a problem we must confront,” Archbishop Oscar Aparicio Cespedes of Cochabamba told Catholic News Service.

The visits “ad limina apostolorum” — to the threshold of the apostles — are a combination of a pilgrimage to the tombs of Sts. Peter and Paul and meetings with the main Vatican offices to exchange information, insights and ideas.

The problematic groups in Bolivia, also known as “parallel churches,” are made of priests who have been suspended from their ministry and “seminarians who have claimed autonomy and distance from the church,” the archbishop said.

The Brazilian Catholic Apostolic Church was established in 1945 by former Bishop Carlos Duarte Costa, who objected to the Roman Catholic Church’s stance on papal infallibility, priestly celibacy, divorce and allowing priests to have a civil or military profession.

After he established the Catholic Apostolic Church, Bishop Duarte was excommunicated by Pope Pius XII in 1946.

Some members of the schismatic group went on to form other independent Catholic churches in the United States, Europe and Latin America, Archbishop Aparicio said.

The parallel churches in Bolivia, he added, appeared six years ago with very little initial success. However, the groups have gained strength “for the past year and a half.”

“Recently, about two or three months ago, they began to announce publicly that they are not in communion with the pope and the bishops and that they are a separate group even though they call themselves Catholic,” Bishop Aparicio said.

Still, the Bolivian archbishop said, the groups tell people that “they are true, authentic Catholics compared to Roman Catholics.”

Archbishop Aparicio told CNS that Pope Francis called on the bishops to “clarify, help and guide” the faithful so that they are not deceived, especially by former members of the clergy who “many times present themselves as Catholic.”

The bishops, he said, were able to “speak freely” to the pope and “express our challenges and problems and to hear a world of encouragement to go forward in our pastoral service.”

“As Latin Americans, we understand each other very well,” Archbishop Aparicio said. “There are moments where (the pope) says a joke, or speaks about an event or recounts an anecdote that lightens the atmosphere and breaks down barriers.”

One of the bishops, he recalled, asked Pope Francis if he had a message for the people of Bolivia.

“He summarized his message in three parts. First, ‘I carry you in my heart just as I did when I visited you. I still love you and pray for you,'” Archbishop Aparicio told CNS.

“Secondly, ‘do not be afraid; go forward always. Jesus Christ is our foundation.’ And lastly, to the young people, he said, ‘Never lose the joy of your youth.'”