Pope urges bishops to contribute to peace as pastors, not politicians 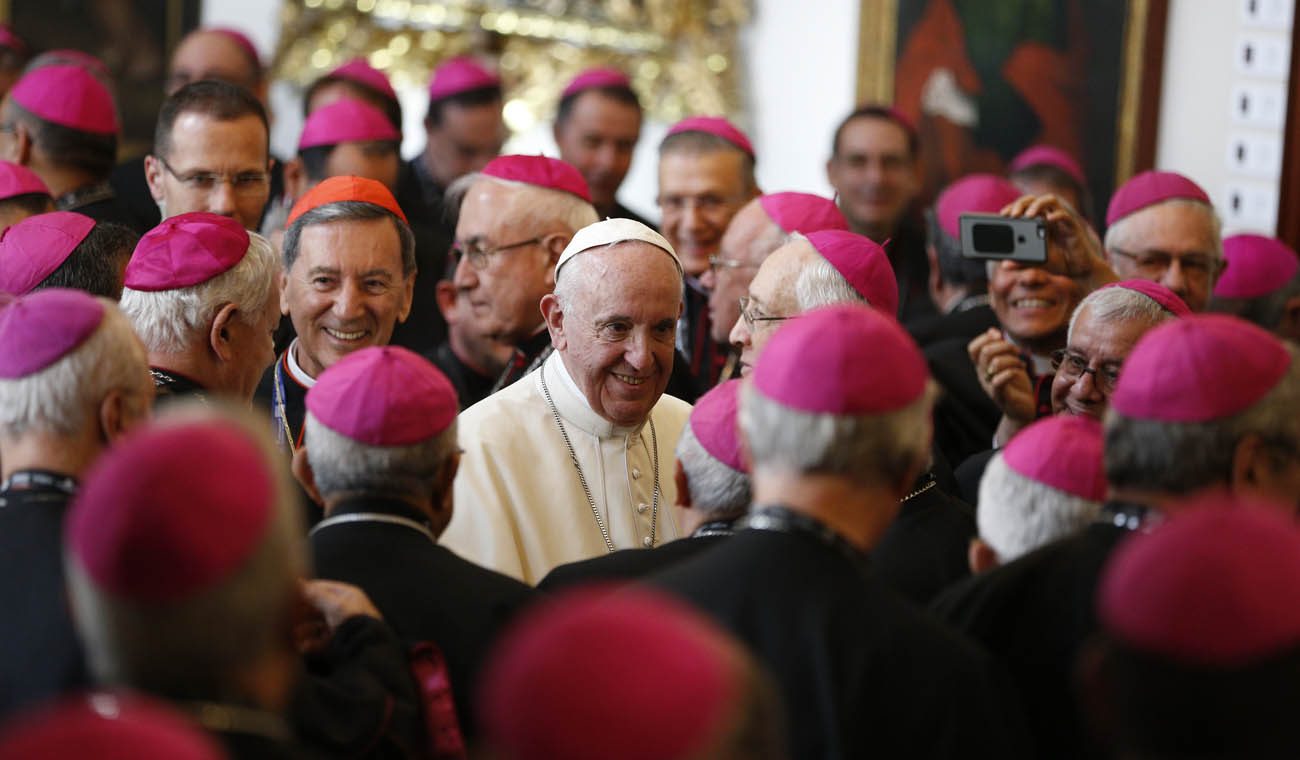 VATICAN CITY (CNS) — Quoting celebrated Colombian author Gabriel Garcia Marquez, Pope Francis told the country’s bishops he knows “it is easier to begin a war than to end one” and that, to succeed, Colombia needs bishops who are pastors, not politicians.

“All of us know that peace calls for a distinct kind of moral courage,” the pope told the bishops Sept. 7. “War follows the basest instincts of our heart, whereas peace forces us to rise above ourselves.”

Welcoming Pope Francis to the meeting, Cardinal Ruben Salazar Gomez of Bogota told the pope, “Our homeland is struggling to put behind it a history of violence that has plunged it into death for decades,” but the process of building peace “has become a source of political polarization that every day sows division, confrontation and disorientation. We are a country marked by deep inequalities and inequities that demand radical changes in all fields of social life. But it does not seem we are willing to pay the price required.”

One temptation, the pope said, is for the bishops and priests to get involved in the country’s heated partisan political debate.

Resist, the pope told them. The country needs pastors. It needs ministers who know firsthand “how marred is the face of this country,” how deep are the wounds and how intensely it needs to experience healing and forgiveness.

“Colombia has need of you so that it can show its true face, filled with hope despite its imperfections,” he said. It needs the church’s help “so that it can engage in mutual forgiveness despite wounds not yet completely healed, so that it can believe that another path can be taken, even when force of habit causes the same mistakes to be constantly repeated.”

Finding a magic formula to fix problems is a temptation, Pope Francis said. But the church’s ministers “are not mechanics or politicians, but pastors.”

The church does not need special favors from politicians, he said. It only needs the freedom to speak and to minister.

But it also needs internal unity, the pope told the bishops. “So continue to seek communion among yourselves. Never tire of building it through frank and fraternal dialogue, avoiding hidden agendas like the plague.”

Although he said he had “no recipes” and would not “leave you a list of things to do,” Pope Francis made two specific requests of the bishops: Pay more attention to “the Afro-Colombian roots of your people,” and show more concern for the church, the people and the environment in southern Colombia’s Amazon region.

The region holds “an essential part of the remarkable biodiversity of this country,” and protecting it is “a decisive test of whether our society, all too often prey to materialism and pragmatism, is capable of preserving what it freely received, not to exploit it but to make it bear fruit.”

In a speech that included several references to the duty to defend human life, Pope Francis said he wondered if society could learn from the indigenous people of the Amazon “the sacredness of life, respect for nature and the recognition that technology alone is insufficient to bring fulfillment to our lives and to respond to our most troubling questions.”

“I am told that in some native Amazon languages the idea of ‘friend’ is translated by the words, ‘my other arm.’ May you be the other arm of the Amazon,” he said. “Colombia cannot amputate that arm without disfiguring its face and its soul.”

A few hours later, Pope Francis met with members of the executive committee of the Latin American bishops’ council, known as CELAM, and focused on the ongoing efforts to evangelize the continent by means of “closeness and encounter.”

The church and its members must be concrete and unafraid of listening to and accompanying real people with real challenges.

Unlike the colonizers of old or exploiters of today, he said, “the church is not present in Latin America with her suitcases in hand, ready, like so many others over time, to abandon it after having plundered it.”

The colonizers looked with “superiority and scorn” on the “mestizo face” of the continent’s Catholics, the pope said, while Catholics themselves are called to celebrate that diversity of races and cultures the same way they honor Our Lady of Guadalupe and Our Lady of Aparecida, both of which have mixed-race features.

Insisting the bishops do more to support, educate and appreciate lay Catholics, Pope Francis spoke particularly of the contribution of women.

“Please, do not let them be reduced to servants of our ingrained clericalism,” he said.

PREVIOUS: Colombia youths must teach elders to forgive, to move on, pope says

NEXT: Magnitude 8.1 earthquake strikes off Pacific coast of Mexico, Guatemala