Oktoberfest a huge hit for 300 young adults in hip locale 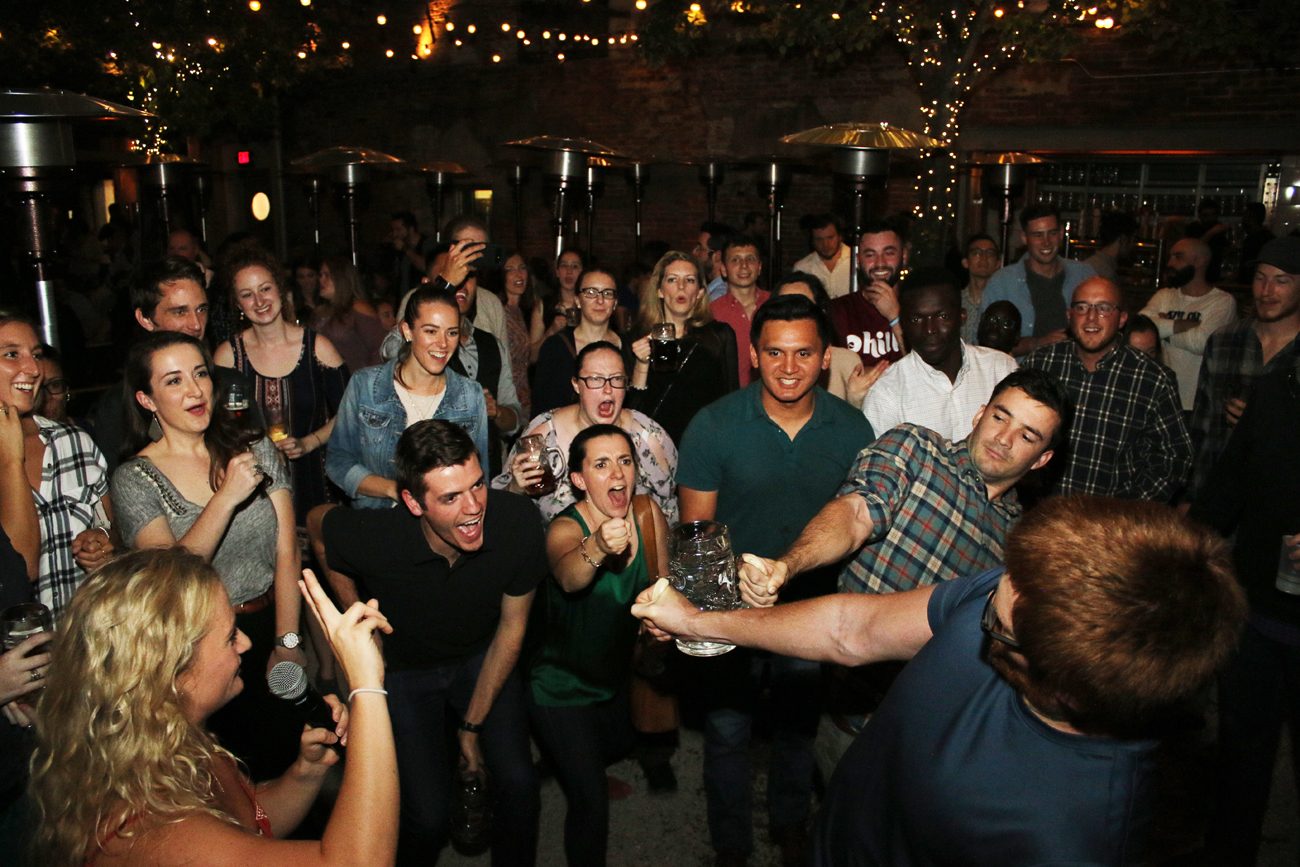 Enjoying the fun at the Oktoberfest party hosted Oct. 6 by Anthem are some of the 300 partiers led by Anthem staffer Abby Gutowski, lower left. (Sarah Webb)

Our Lord said where two or three are gathered, there he is. He must have really been there on Friday night, Oct. 6 when 300 young adults showed up to Anthem’s Oktoberfest event at Frankford Hall, a hotspot in the Fishtown neighborhood of Philadelphia.

Lest you imagine this was just another (or a bigger) Theology on Tap, the director of Anthem (the rebranded Office of Youth and Young Adults for the Archdiocese of Philadelphia), Jacob King, is quick to point out the differences.

“We started to notice that those kinds of events, which are great, were starting to turn into more instructional, ‘religious formation’ events. This isn’t that. It’s about meeting people and really evangelizing on the front lines through getting to know people.”

And indeed it was. Aside from Archbishop Charles Chaput leading grace, the Oktoberfest was unique in that it was a genuinely social event for the city’s young Catholics, rather than an “after party” to a worship- or instruction-focused event.

“My role here is just to say grace,” said the archbishop. “We pray that we turn our hearts and minds toward you, O God, and that everyone has a good time tonight.

“And also that we do not drink too much,” he added.

The private ticketed event for those over 21 that included priests, seminarians and religious — even three of the archdiocese’s four auxiliary bishops — sold out at its initial cap of 250. But sales were expanded at the last minute and 50 more tickets quickly were snatched up.

Frankford Hall is a Stephen Starr restaurant at 1210 Frankford Avenue, a traditional, open-air German biergarten that it is extremely popular with Philadelphia’s young adults.

This “soft sell” approach to religion was something affirmed by Anthem’s whole team, whose three members have been brainstorming new events and approaches to their particular demographic since the office officially opened in 2016.

Prior to King’s arrival, ministry to youth and young adults fell under the Office for Catechetical Formation, which handles parish RCIA and PREP programs.

“A lot of young adults in the city are curious, or lapsed, still interested in the church,” said Anthem’s assistant director, Meghan Mastroianni. “There’s a desire to be here. But a lot of them don’t necessarily want to jump right into a Mass or a Theology on Tap or RCIA. This is less intimidating. But it’s about fellowship and that initial moment of contact for getting people to walk with Christ.”

Live entertainment featured local polka sensation Polkadelphia, which describes itself as “not your ordinary oompah band” (their set list includes polka-stylized covers of pop and rock classics), and a later lineup of solo performers. 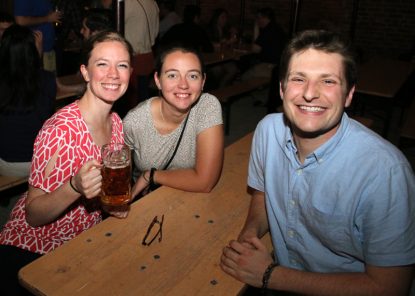 Young adults made new friends through the church at the Oct. 6 Oktoberfest at Frankford Hall. (Sarah Webb)

Oktoberfest was a huge hit with the crowd it gathered. “It’s just the kind of thing I want to be at,” said Chris Friel, a Bucks County resident and veteran of the Philadelphia young adult scene. “These are the kind of things that lead people to Christ through the friends we bring and make at them.”

“Having Frankford Hall all to ourselves is literally the best thing ever,” said Jeremiah Belocura, a transplant to South Philly. “The open bar and buffet with Archbishop Charles Chaput also helps a lot.”

King and Mastroianni describe Oktoberfest as just the start of Anthem’s new tack. “It’s a getting-to-know-you event, a ‘belong’ event,” said King. “We’re here to help build community among young adults, and this is really the top of the funnel.”

The Frankford Hall event was a social preview to Sunday’s “Queen Takeover,” Anthem’s official Mass consecrating the young adults of Philadelphia (and the city itself) to the Blessed Mother.

The next steps King describes as local volunteer service events. “This is really about building trust, about getting to know us,” he said, “but also the people we want to have go out and evangelize the city.”

King said Anthem has a number of volunteer opportunities in the works with Catholic Social Services, most of which focus on serving Philadelphia’s homeless and underprivileged.

“When they move to the city, so many people are geared up and excited and want to be involved, and that’s what Anthem is here to make easier. To help people really serve. But also have fun.”

NEXT: Sisters needed new wheels, so donors stepped up for a van