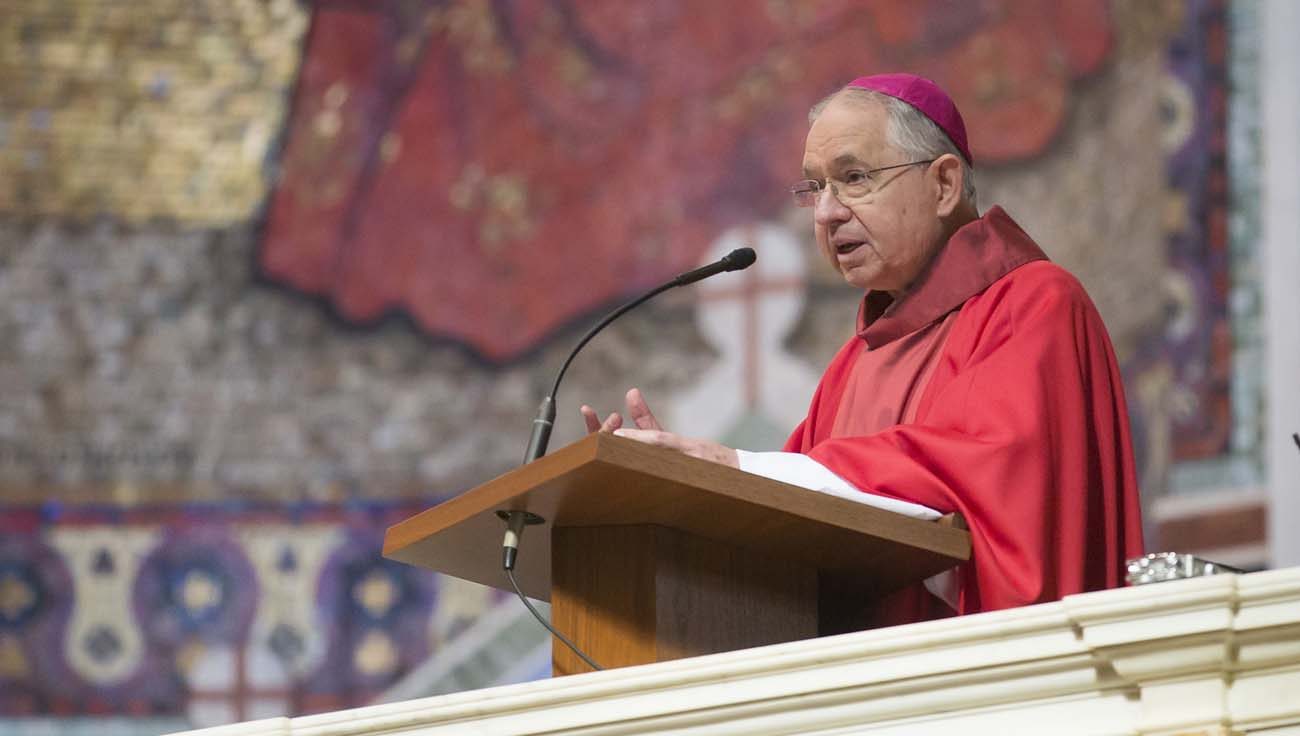 Archbishop Jose H. Gomez of Los Angeles, who is vice president of the U.S. Conference of Catholic Bishops, delivers the homily during the 65th annual Red Mass Oct. 1 at the Cathedral of St. Matthew the Apostle in Washington. The Mass traditionally marks the start of the court year, including the opening of the Supreme Court term. (CNS photo/Jaclyn Lippelmann, Catholic Standard)

WASHINGTON (CNS) — Los Angeles Archbishop Jose H. Gomez on Oct. 1 asked the Supreme Court justices, government officials, lawyers and other members of the judiciary gathered at the Cathedral of St. Matthew the Apostle in Washington to renew a commitment to a government that “serves the human person.”

He was the homilist at the 65th annual Red Mass in the nation’s capital. Celebrated the Sunday before the opening of the Supreme Court’s term, the annual Mass invokes the Holy Spirit upon those who are responsible for the administration of justice.

The Mass is sponsored by the John Carroll Society, a network that aims to enhance fellowship among Catholic leaders in the Washington area and serve the archbishop of Washington.

In his homily, Archbishop Gomez spoke about St. Junipero Serra, the newest American saint who was one of the founding missionaries of Los Angeles as part of a string of missions in California and was canonized by Pope Francis during the pontiff’s 2015 visit to Washington.

By canonizing him, Archbishop Gomez said Pope Francis was making a point that “we should honor St. Junipero Serra as one of the Founding Fathers of the United States,” since the missionaries came here before the pilgrims and began their outreach before the nation’s first president was inaugurated.

Those missionaries, along with the colonists and statesmen later on, laid the groundwork for “a nation conceived under God and committed to promoting human dignity, freedom and the flourishing of a diversity of peoples, races, ideas and beliefs,” said Archbishop Gomez, who is vice president of the U.S. Conference of Catholic Bishops.

The reason the Red Mass is so important each year, Archbishop Gomez said, is because “there is a time for politics and a time for prayer. This is a day for prayer.”

The readings for the Mass included the story of Pentecost, which Archbishop Gomez said “reveals the Creator’s beautiful dream for the human race,” where people from different nations were brought together through the Holy Spirit, who spoke to each of them in their native tongues.

“The mission that Jesus gave (the church) is the beautiful mission of gathering all the peoples of the earth into one family of God,” said Archbishop Gomez. “In God’s eyes, there are no foreigners, there are no strangers. … When God looks at us, he sees beyond the color of our skin, or the countries where we come from, or the language that we speak. God sees only his children — sons and daughters made in his image.”

Archbishop Gomez noted that before God created the earth, he knew each person he would create and had a plan for each of their lives.

“Every life is sacred, and every life has a purpose in God’s creation,” he said.

The Founding Fathers understood this teaching so well that they called the truths “self-evident,” said Archbishop Gomez.

“America’s founders believed that the only justification for government is to serve the human person — who is created in God’s image; who is endowed with God-given dignity, rights and responsibilities; and who is called by God to a transcendent destiny,” said Archbishop Gomez.

Addressing the guests at the Mass, Archbishop Gomez said, “My brothers and sisters, you all share in the responsibility for this great government.”

“So today, let us ask the Holy Spirit for His gifts and renew our commitment to this vision of a government that serves the human person,” said Archbishop Gomez. “Let us commit ourselves to an America that cares for the young and the elderly, for the poor and the sick; an America where the hungry find bread and the homeless a place to live; an America that welcomes the immigrant and refugee and offers the prisoner a second chance.”

While at times our nation has failed to live up to its founding vision, Archbishop Gomez said, “that should not make us give in to cynicism or despair.”

“For all our weakness and failure: America is still a beacon of hope for peoples of every nation, who look to this country for refuge, for freedom and equality under God,” he added.

“True forgiveness sets us free from the cycles of resistance and retaliation; it sets us free to seek reconciliation and healing,” said Archbishop Gomez. “And this is what we need in America today — a new spirit of compassion and cooperation, a new sense of our common humanity. We need to treat others as our brothers and our sisters — even those who oppose or disagree with us. The mercy and love that we desire — this is the mercy and love that we must show to our neighbors.”

NEXT: Rev. King’s words on nonviolence need to be lived today, speakers say