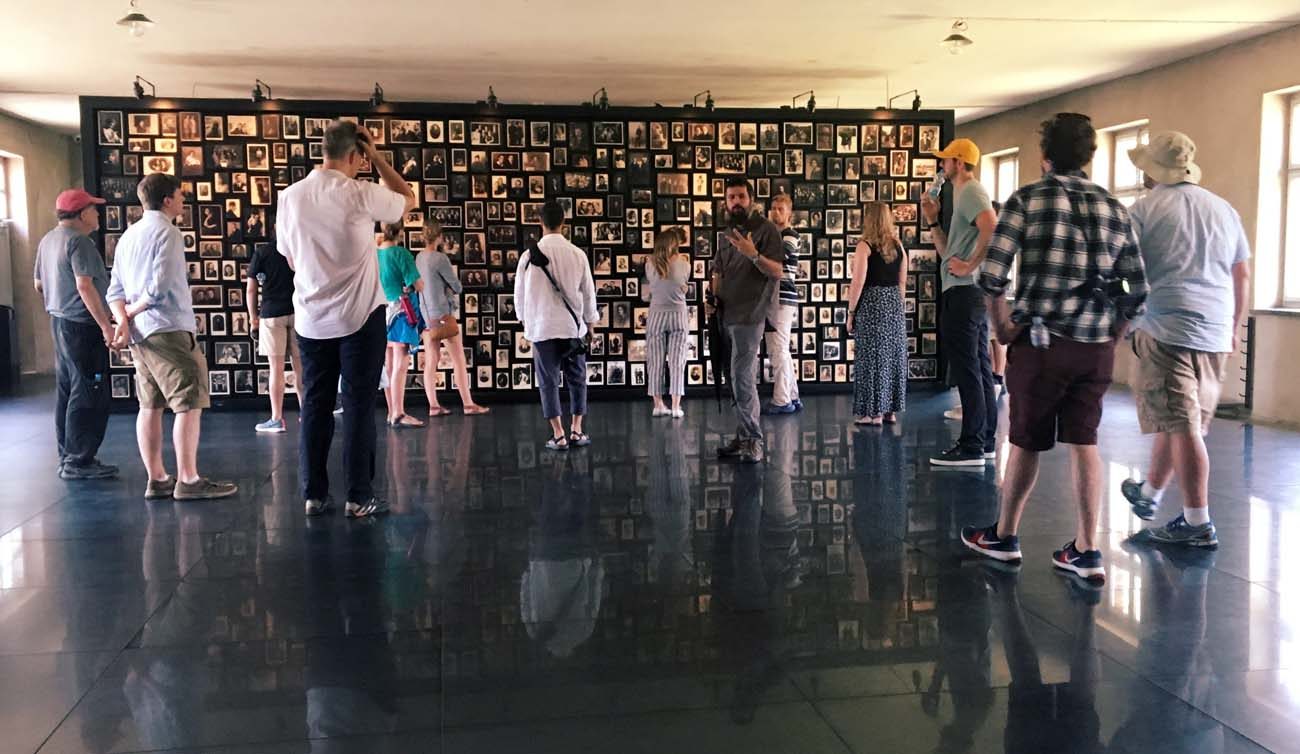 Participants in the Fellowship at Auschwitz for the Study of Professional Ethics program view an exhibition of family photographs displayed in the Sauna Room of Auschwitz II June 26. Auschwitz is in Poland, built on land Nazi Germany annexed in World War II. (CNS photo/Thorin Tritter courtesy FASPE)

WASHINGTON (CNS) — This summer, seminarian Cathal Kelleher gazed on a cross that sits atop a church just outside the Auschwitz concentration camp.

He embraces the cross as a symbol of Christianity yet faces the reality that some people who called themselves Christians committed the terrible atrocities of World War II.

Kelleher, along with 13 other fellows, participated in the Fellowship at Auschwitz for the Study of Professional Ethics program, or FASPE. The program invites graduate students and young professionals to a 12-day seminar trip through Germany and Poland within respective departments of study: business, journalism, law, medical and seminary.

Fellows in each of the program’s five areas spend two intensive weeks in Germany and Poland, visiting Auschwitz and key historical sites in Berlin and Krakow.

The FASPE Seminary attendees examine questions of ethics those in their profession face today, in light light of the failures of the religious leaders in Germany and Poland from 1933 to 1945.

Kelleher, who is studying to be a Holy Cross priest, another Catholic seminarian and a Catholic laywoman took part in the fellowship’s seminary experience in June with fellow Christians and Jews, each seeking a vocation in some sort of public ministry.

Julia McStravog studies in the doctoral theology program at LaSalle University in Philadelphia, with a track in Catholic studies, which allowed her to join the seminary group. She told CNS in an interview that she hopes her doctorate will allow her to focus on how Catholics teach and catechize around ecumenical and interreligious issues.

“I occupied this interesting space as a young, lay, Catholic woman who is not seeking religious life,” McStravog said.

Despite being the only person not ordained or on track to be ordained, McStravog was able to engage as a theologian with her background of working for the U.S. Conference of Catholic Bishops in the Secretariat for Ecumenical and Interreligious Affairs, where she is a program and research specialist.

“It was great to be a part of and hear all the discussions because as a theologian, if your theology isn’t practical or useful or helpful, especially at a congregational level, then what is the point,” McStravog said.

For Deacon Peter Santandreu, a fourth-year seminarian at Christ the King Seminary in the Diocese of Buffalo, New York, the FASPE program allowed him to see the power that people place in priests, clergy and faith leaders, he told CNS.

“I think its wrong to pretend that there is no power there, because then it becomes neglected,” Deacon Santandreu said.

As a seminarian, he said he hopes to “accept the fact that people will ascribe a certain amount of power and authority to my position and to become aware of that and to use it for the service of God … to not let it waste away.”

At the end of the program, the fellows are asked to write a paper or sermon seeking to further understand what was reflected upon during their time in Europe. McStravog said she will examine what she called the “ethical imperative of witness.”

“Pope Francis says, ‘You pray for the hungry and then you feed them’, so you witness to the suffering, and then what do you do?” McStravog said. “What does the witnessing compel you to do as a Christian? What does that look like, what actual tangible things can you do?”

McStravog said the experience led her to ask herself what it meant for her as a Catholic, “being part of a universal church, that it was my fellow Christians who were the perpetrators of this, that I am also baptized as they were.”

The FASPE program led these Catholics to personally reflect on significant questions about their plans for ministry and evangelization.

Deacon Santandreu said much of what he realized involved a personal understanding of the power within his vocation to be a religious leader.

“I think it was really a grasp in understanding what I myself as a human being am capable of, especially given that position of power in society,” he said. “As a faith leader, it’s important to be a good example and to be the first person to maintain that.”

With one year of seminary left, Kelleher said he he hopes to bring the unity of the Christian faith to his future ministry as a priest.

“I think I would love to communicate to people we need to keep a unity of our being, of our faith must inform our political views, our moral views, our economic views, our social justice views,” Kelleher said. “If that’s not there, then it won’t obstruct the evil in the world.”