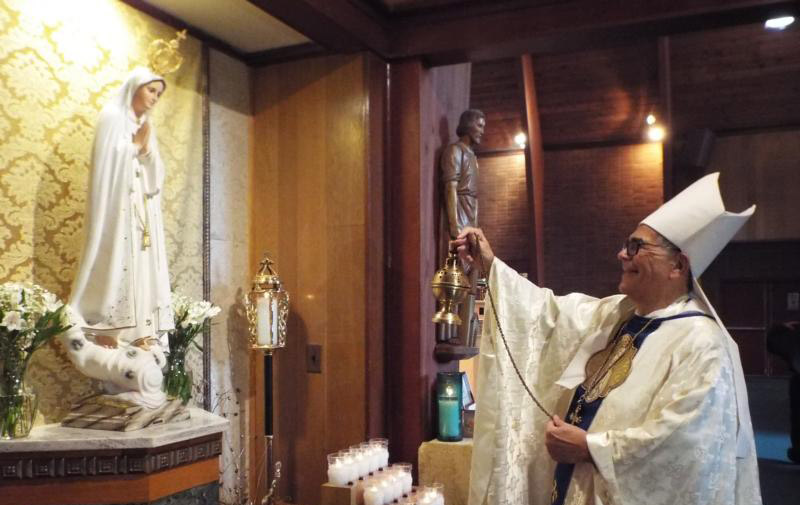 MIDDLETOWN, N.Y. (CNS) — Auxiliary Bishop Dominick J. Lagonegro of New York celebrated Mass Oct. 13 at the National Shrine of Our Lady of Mount Carmel in Middletown to mark the 100th anniversary of the last vision at Fatima and the miracle of the sun.

During his homily, Bishop Lagonegro held up one of the iconic Fatima photographs of the crowd estimated at 70,000 people, and pointed to two figures. “This is my uncle, and this is my aunt,” he said of the late Herminia and Antonia Caixerio, who remarkably were in Fatima, Portugal, for the miracle of the sun.

Though the couple was married in the United States, they happened to be visiting family in Portugal Oct. 13, 1917. They “heard what was going on” at Fatima and went to see for themselves, he said, once again telling the incredible story that his aunt had told him multiple times during his life.

“My aunt emphasized how absolutely dreadful the weather was that day,” said Bishop Lagonegro, of his coveted family story. “She told me that the rain kept coming and coming, soaking everything.”

They tracked through mud to get to the “cova,” or field, where the visionaries saw Mary and by the time they arrived, “they were drenched,” the bishop said.

“But when the (three Fatima) children arrived, the rains stopped, the clouds opened and there was the sun,” he said, telling his aunt’s story. “It went up and down and turned back and forth, almost as if it were dancing.”

“Who else but the Blessed Mother could make the sun dance,” he laughed.

But then it got big and “started coming to the earth,” Bishop Lagonegro continued. “My aunt recalled that “it looked as if everyone’s clothes were bright yellow from the sun.”

“It continued to fall to the earth for a few minutes,” he said, telling her story, “and then stopped” going back into its orbit.

He said his aunt was stunned when she saw in amazement that not only were her clothes completely dry, but the previously muddy ground was now dry and hard.

Wearing a crucifix given to him by the St. John Paul II, who was a lifelong devotee of Mary and Fatima, Bishop Lagonegro said that the message of Fatima is as important today as it was 100 years ago.

“Peace will only come through prayer and penance,” he said. “It’s important for us to pray the rosary and offer acts of penance,” such as a kind gesture, a smile or an offering of daily anxieties to God.

“I truly believe that one day we will find peace in our world, but only through prayer and sacrifice,” said Bishop Lagonegro.

The National Shrine of Our Lady of Mount Carmel houses one of only three statues in the world that depicts the last vision of Fatima, which is based upon the interpretation of Fatima visionary St. Lucia dos Santos.

In the final vision Oct. 13, 1917, Mary appeared to Lucia and her cousins Jacinta and Francisco Marto with the infant Jesus in her arms. She was clothed as Our Lady of Mount Carmel and holding the brown scapular in her hands. Sister Lucia joined the Discalced Carmelite Nuns in 1947.

Chalupsky is a reporter at the Catholic Transcript, the magazine of the Archdiocese of Hartford.

NEXT: Protesters arrested for blocking pipeline work through nuns’ property