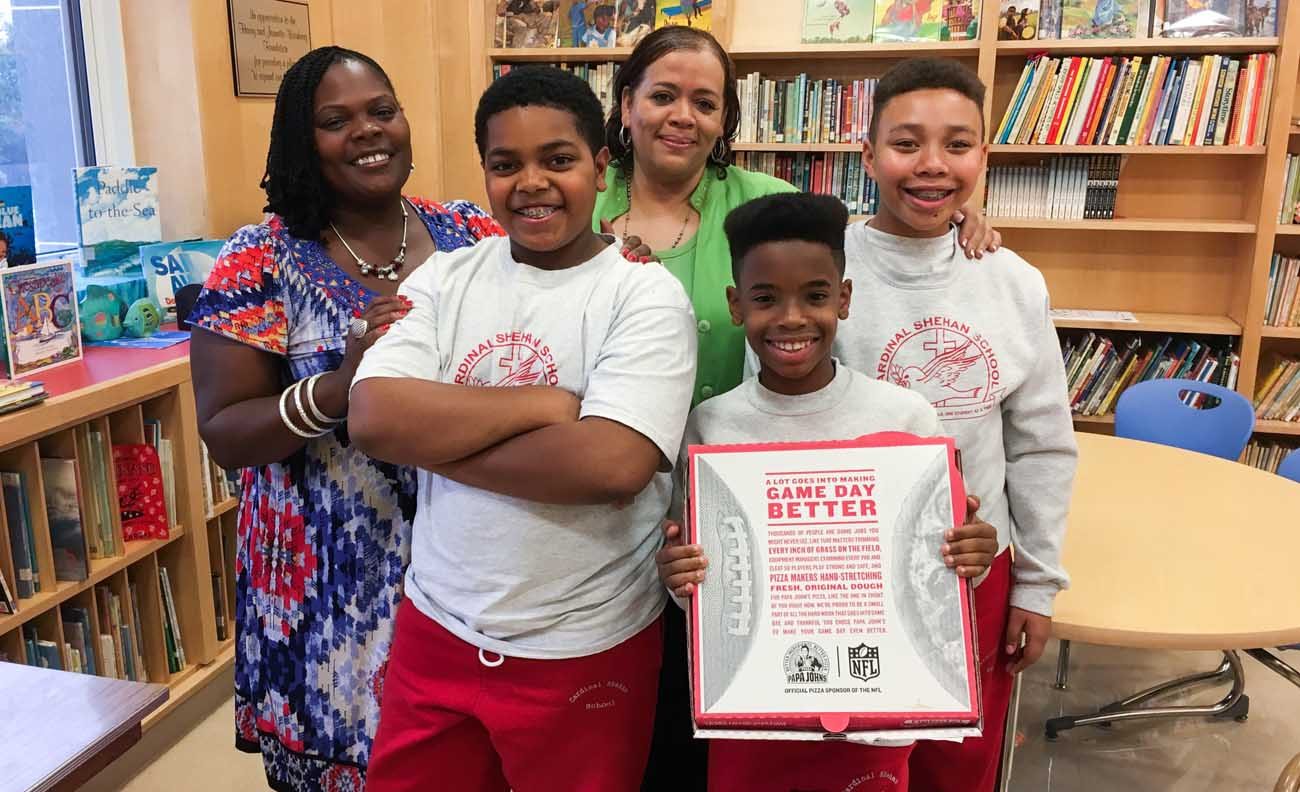 BALTIMORE (CNS) — A hurricane-stricken Puerto Rican and a local fan who dropped off pizza are among the admirers of a video of the choir from Cardinal Shehan School in Baltimore that has gone viral and been clicked on at least 8.5 million times.

That was as of lunch hour Oct. 12. By week’s end, Kenyatta Hardison’s quick thinking and the talent of the children at the Partners in Excellence School on the campus of St. Matthew Parish in Northwood will likely top 10 million views.

ABC’s “World News Tonight” broadcast a story about the middle school choir Oct. 15. Hardison has fielded media queries from USA Today, The Washington Post, The Baltimore Sun and CNN, and her students have even auditioned via Skype for a producer of a national daytime talk show.

Benefactors of the Archdiocese of Baltimore saw two of her students, John Paige and Kai Young, perform a Gospel rendition of the Andra Day song “Rise Up” at a Sept. 6 breakfast.

On Sept. 30, nearly 1,000 saw them and fellow Cardinal Shehan students anchor an archdiocesan Catholic Schools Choir in another uplifting performance of the song at the Archdiocese of Baltimore’s ninth annual gala for Catholic schools. The gala was the day before the anniversary of the death of Hardison’s mother, Sylvia, who had taught music at a Catholic school.

With her mother in mind as her students prepped for the gala, Hardison asked them to give a little more in rehearsal, and she began recording a video on her phone and sharing it on Facebook Live.

“We had a little talk about being a gift-giver, to make sure they knew what the song (‘Rise Up’) was about. And then my phone just kept going off. I actually had to reboot it; it was getting stuck,” Hardison said, of all the Facebook notifications that were overloading her phone.

After ChoirBuzz shared it on Facebook, the video gained further traction, from as far away as Argentina, and most challengingly, from Puerto Rico, where one fan remarked that the singing of the students helped them manage the travail of Hurricane Maria.

“You lifted my spirit,” the person commented on Facebook. “I was sitting here bawling. They were tears of joy. They gave me hope.”

Hardison understood, as her students have moved her in the same way.

“I just thought it (the video) was going to family, let the families see their (children) are growing,” Hardison told the Catholic Review, the media outlet of the Baltimore Archdiocese. “They (her students) don’t know how much they pick up my day.”

The feeling is mutual, as Paige, a sixth-grader, told her on the day of the now-famous rehearsal, “I’m blooming into a butterfly.”

“This is beyond singing because of the message,” Hardison said. “It’s about God. God is the center.”

Hardison, who also is a minister of music at Historic St. Francis Xavier Parish, attended parish schools at the since-closed St. Katharine of Siena and Most Precious Blood. After graduating from The Catholic University of America in Washington with a degree in music education 23 years ago, Hardison joined the staff of Cardinal Shehan School, where the principal is Fametta Jackson, and never left.

“We’ve had so much talent come through this school,” Hardison said. “It’s not just singing. If you’re successful in science, that’s your talent, that’s your gift. It’s one of the reasons why I’ve been here (so long).”

She has been overwhelmed by the response, which includes fans who have incorporated it into their workout music; to Mel Ledbetter, an area realtor who brought pizza for the choir Oct. 12; to a monetary donation to the school on behalf of a fan who said it “brought it a smile” to the face of his bedridden father.

“God,” Hardison told her students, “is using you like he used Job or Moses.”

Parks is on the staff of the Catholic Review, the media outlet of the Archdiocese of Baltimore. Paul McMullen, managing editor, contributed to this story.

NEXT: Bishop at Mass recalls aunt’s story of being at Fatima for miracle of sun