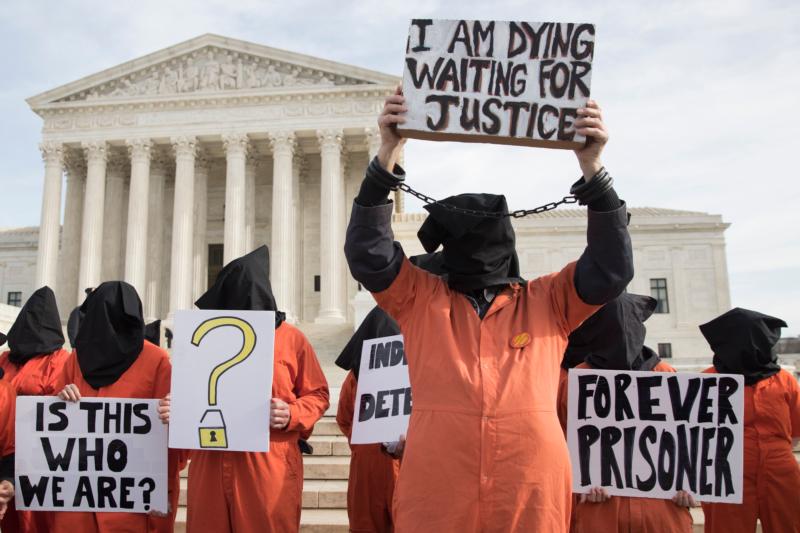 Protesters holds signs outside the U.S. Supreme Court in Washington in early January urging the closure of the U.S. detention center at Guantanamo Bay, Cuba. In a letter to the secretary of defense, Bishop Oscar Cantu of Las Cruces, N.M., said moral and financial reasons require the Pentagon to close the detention center. Bishop Cantu is chairman of the U.S. bishops’ Committee on International Justice and Peace. (CNS photo/Michael Reynolds, EPA)

WASHINGTON (CNS) — Moral and financial reasons require the Pentagon to close the detention center at Guantanamo Bay, Cuba, the chairman of the U.S. bishops’ Committee on International Justice and Peace reiterated in a letter to the secretary of defense.

Bishop Oscar Cantu of Las Cruces, New Mexico, also said in an Oct. 3 letter to Defense Secretary James Mattis that any of the 41 remaining detainees who have been cleared of charges should be transferred to new host countries and that no new detainees should be assigned to the prison.

The bishop called for the continuation of periodic review of the cases of the detainees who remain, saying “indefinite detention without trial is also inhumane.”

“Indefinite detention is not only injurious to detainees, but it also compromises the U.S. commitment to the rule of law and undermines our struggle against terrorism,” he wrote.

“Our ultimate goal is the closure of Guantanamo, a task that ultimately will require congressional approval. Be assured that we will continue to work toward that end,” the letter said.

Citing examples of torture and mistreatment of detainees as well as the immorality of holding people indefinitely without trial, various campaigns and numerous activists have called for the closure of the center since it opened.

Bishop Cantu told Mattis that his letter was prompted by reports about the possible expanded use of the prison and the continuation of holding people indefinitely.

“Our concerns are not new. For many years we have urged the closing of Guantanamo because it, like Abu Ghraib (prison in Iraq), has become a symbol of U.S. violations of basic human rights and detainee abuse,” Bishop Cantu wrote. “The Catholic Church is absolutely opposed to torture, recognizing it as intrinsically evil.”

He repeated the bishops’ support for President Barack Obama’s executive order banning torture and called for bipartisan legislation that would make torture, “which some euphemistically refer to as ‘enhanced interrogation,'” illegal.