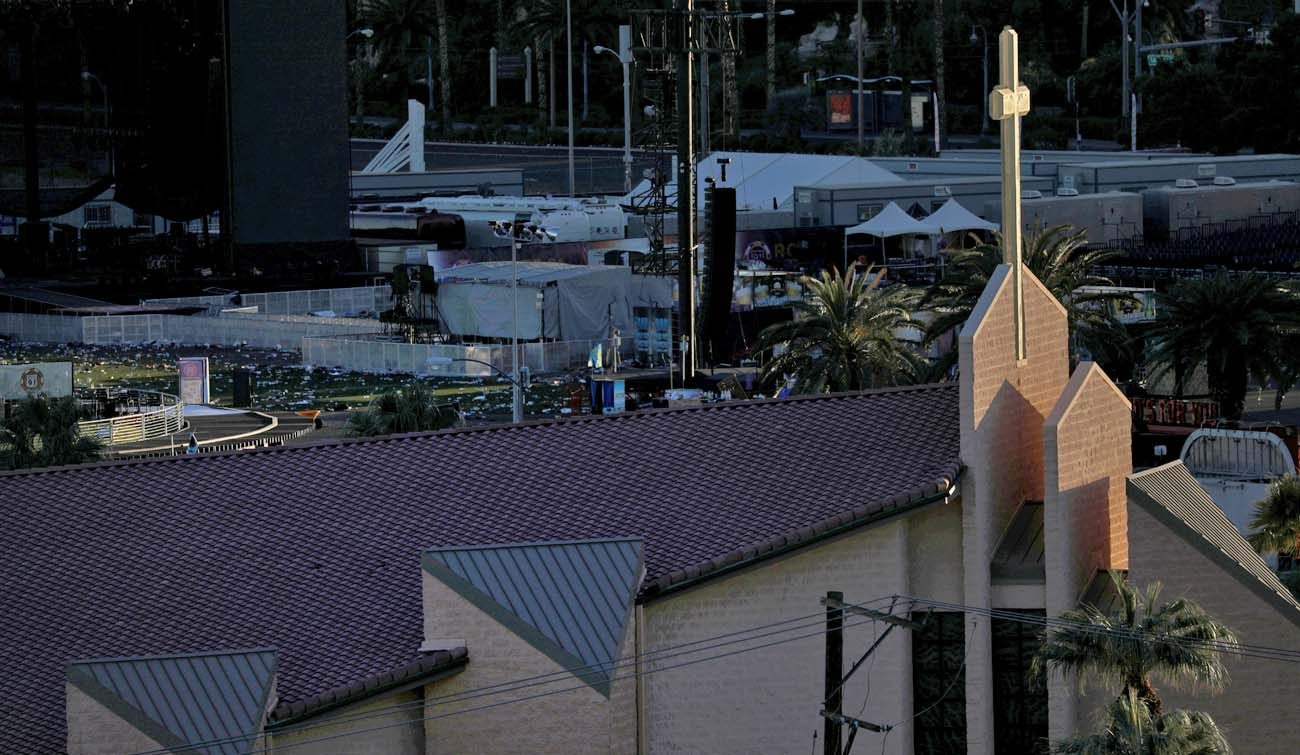 A cross is seen atop the Shrine of the Most Holy Redeemer Oct. 2 on the Las Vegas Strip near the location of a mass shooting. The church became a source of refuge after the deadly shooting that took place just across the street Oct. 1, killing at least 59 people and wounding more than 500, making it the deadliest mass shooting in modern U.S. history. (CNS photo/Mike Blake, Reuters)

WASHINGTON (CNS) — The Shrine of the Most Holy Redeemer — a white stucco church just off the Las Vegas Strip and dwarfed by giant hotels, casinos and flashing neon lights — has long been a spiritual oasis for tourists.

The church, with a statue of Jesus, his arms outstretched, near its entrance, became a different source of refuge after the deadly mass shooting took place Oct. 1 just across the street.

Its parking lot became an immediate place of shelter for concertgoers fleeing the barrage of bullets that showered down onto the country music festival.

And hours later, a member of the Metropolitan Police Department asked a diocesan official about using the church space — allowing some of the concertgoers to go inside and the police to set up a command post in the parking lot.

Father Bob Stoeckig, vicar general of Las Vegas, said a chancery employee went to the church later in the morning after the shooting took place and found various personal items in the parking lot including shoes, bloodied pieces of clothing and some personal items that people dropped as they fled.

“Near the doors of the church itself he found a few bullets that we believe ricocheted from the concert venue. None hit the building itself,” he said in an Oct. 3 email to Catholic News Service.

He also said the shrine had been closed Oct. 2 and 3 so it could be used as a site to aid the police in completing their investigation.

The shrine, which opened in 1993, can seat 2,200, making it the biggest church in the diocese. It is not a parish and is primarily there to provide a spiritual home away from home to Catholic tourists who come through the city.

A profile of the $3.2 million church in The New York Times a year after it opened said the shrine draws thousands of worshippers a week, 80 percent of them tourists, and unlike most churches, the congregants are invited to put casino chips in the collection plate.

The story said a church worker was designated to make a run every few weeks to cash in the chips at the casinos and a Franciscan friar who once had that role was called “the chip monk.”

The church is flanked by palm trees and the 30-story pyramid of Luxor Hotel and Casino is just behind it.

One statue on the front of the church property is a bronze statue of Jesus sitting on a rock surrounded by statues of children with his arms out as if he is playing with them.

Msgr. Gregory Gordon, pastor of St. Anne Church, about three miles north of the Las Vegas Strip, said the statue has a particular message in these trying days after the shooting that took at least 59 lives and left more than 500 people wounded.

He said Jesus is looking to the west, near the site where the shooting took place.

The priest said that when he recently saw the statue, he prayed that Jesus would look after all the children and bless those of all ages, since those attending the country music festival, that became the target of the deadly shooting, encompassed all ages.

“The group crossed many generations,” he said. “And they were enjoying a peaceful time that was interrupted at the last moment.”