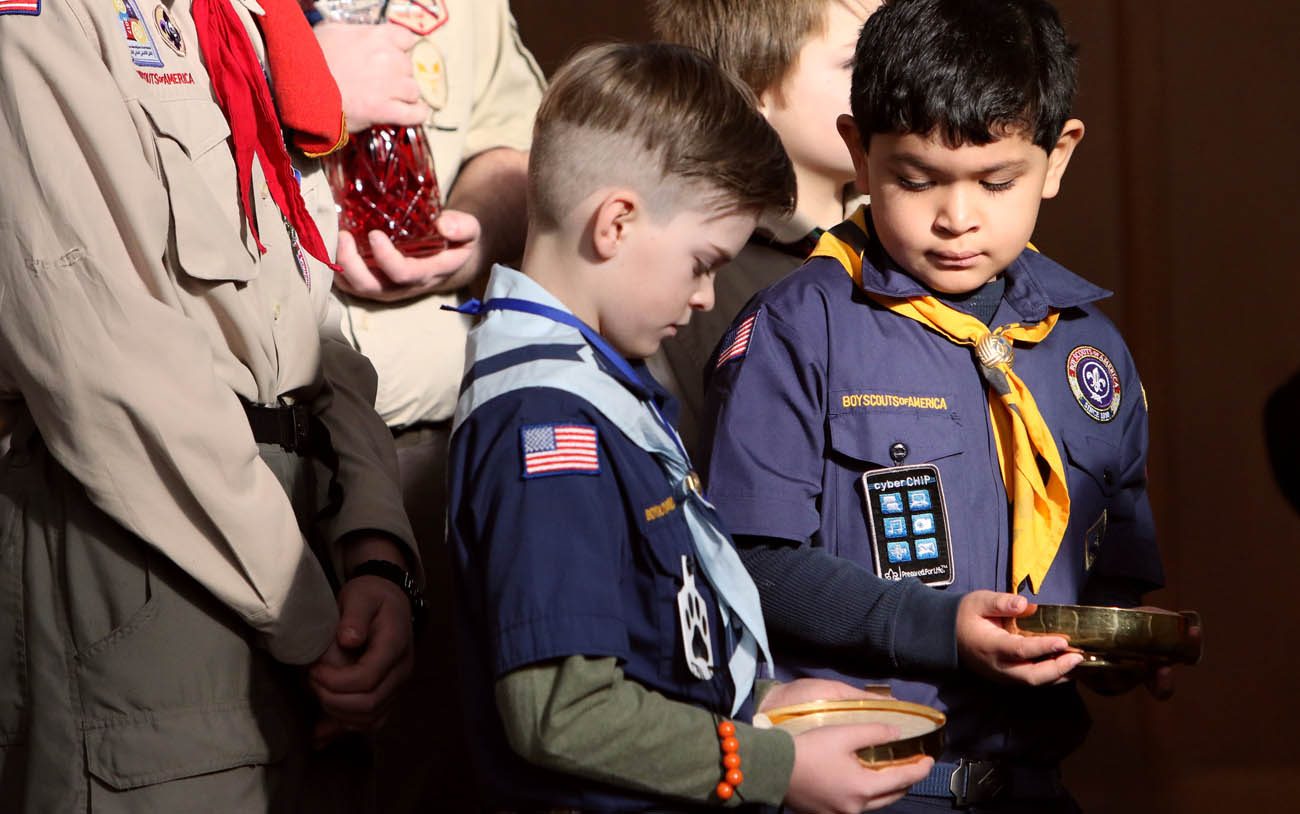 Cub Scouts participate in the presentation of the gifts during a Mass marking Scout Sunday at St. Joseph Church in Kings Park, N.Y., Feb. 5. The Boy Scouts of America's board of directors unanimously agreed Oct. 11 to allow girls into the Cub Scout program next year and let older girls become Eagle Scouts. (CNS photo/Gregory A. Shemitz)

UPDATED – IRVING, Texas (CNS) — The leaders of the National Catholic Committee on Scouting, which has its headquarters in the Dallas suburb of Irving, said they “accept and work with the new membership policy of the Boy Scouts of America” to admit girls.

“We were informed this morning” of the policy change, said an Oct. 11 statement by George Sparks, the national chairman of the group, and the committee’s national chaplain, Father Kevin Smith, a priest of the Diocese of Rockville Centre, New York.

“Once we have had more time to review the policy and a chance to consult our national membership, we will be able to comment further about how this new policy will reflect changes in the makeup of Catholic-chartered units,” they said.

Sparks told Catholic News Service in an Oct. 13 telephone interview that a member of the Scouts’ executive board came to the Catholic Committee’s meeting shortly after the board vote “and brought us up to speed on it.”

The Boy Scouts currently have 2.3 million members, less than half than the 5 million the organization had at is peak in the 1970s.

The vote to accept girls as members was unanimous, according to a spokeswoman for the Boy Scouts.

Admitting girls to the Scouts has “really been an issue that’s been there, although it hasn’t been on the top of the list because of the other membership-related issues the Boy Scouts of America has faced. But it was an issue that was definitely brought up at the Boy Scouts’ executive meeting in May of 2017, and it was carried forth to this board meeting,” Sparks said.

“It is the mission of the National Catholic Committee on Scouting to utilize and ensure the constructive use of the program of the Boy Scouts of America as a viable form of youth ministry with the Catholic youth of our nation,” said the Oct. 11 statement from Sparks and Father Smith.

“The National Catholic Committee on Scouting seeks to sustain and strengthen the relationship between the Boy Scouts of America and the Catholic Church and to work cooperatively with the National Federation for Catholic Youth Ministry and various other groups involved in youth ministry in the United States.”

Girl Scouts leaders expressed displeasure over the summer when the Boy Scouts sought advice from its 270 councils on whether to accept girls. Girl Scouts of the USA’s president, Kathy Hopinkah Hannan, in a letter to her Boy Scouts counterpart, Randall Stephenson, said the Boy Scouts should stick to recruiting “the 90 percent of American boys not currently participating in Boy Scouts.”

Joseph Carballo, 70, a member of St. Helena Parish in the Bronx, New York, has two grown sons who were both Eagle Scouts. “And we all have the same view: no girls,” he told The New York Times Oct. 11.

“Boys and girls should have separate organizations for activities,” Carballo added. “There is an organization for girls. It’s called the Girl Scouts.”

PREVIOUS: Devotion to Padre Pio evident in thousands who turn out to venerate relics