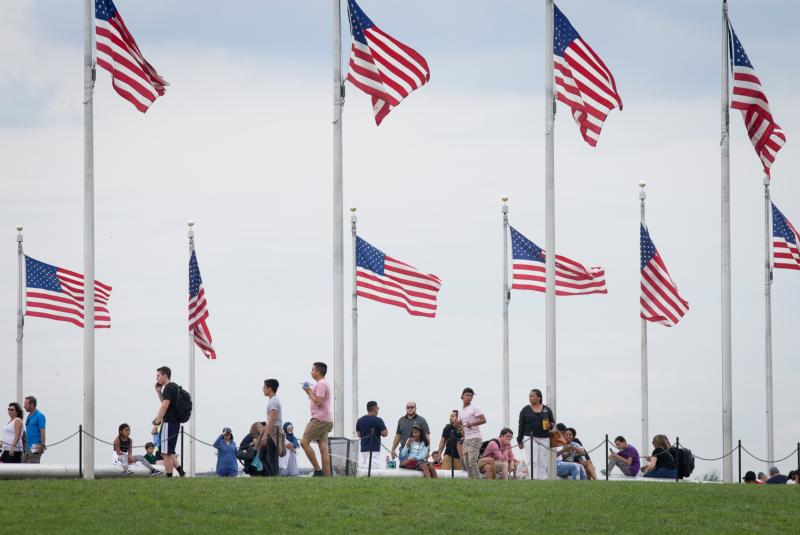 People are seen near the Washington Monument in Washington Aug. 10. Congress is trying to simplify the tax code to deliver on President Donald Trump's campaign promise to cut taxes for the middle class. (CNS photo/Tyler Orsburn)

People are seen near the Washington Monument in Washington Aug. 10. Congress is trying to simplify the tax code to deliver on President Donald Trump’s campaign promise to cut taxes for the middle class. (CNS photo/Tyler Orsburn)

WASHINGTON (CNS) — Tax policy is not a simple matter. It almost never has been and may not ever be.

Still, Congress is trying to simplify the tax code to deliver on President Donald Trump’s campaign promise to cut taxes for the middle class.

Working under the “Unified Tax Reform Framework” introduced by congressional leaders Sept. 27, efforts are underway to reduce the number of tax brackets, resulting in a tax cut for most Americans, and to incorporate numerous other provisions that some observers say primarily benefit the country’s top wage earners and largest corporations.

Some Catholic observers are concerned. They fear that large cuts in health care and other public services will follow as tax revenues fall under the tax reform plan expected to be unveiled Nov. 1 by Rep. Kevin Brady, R-Texas, chairman of the House Ways and Means Committee.

Their concerns are fueled by projections of lost tax revenues and the reaction of conservative lawmakers who may try to lessen the impact on the federal debt by seeking cuts in spending on vital social services.

The Senate Finance Committee expects a $1.5 trillion reduction in tax revenues under the framework by 2027. A more pessimistic outlook comes from the nonpartisan Tax Policy Center, which estimated that the potential impact of proposals under the framework would reduce revenue by $2.4 trillion over the same period.

Three guiding principles on tax policy are offered in the U.S. Catholic bishop’s 1986 pastoral letter, “Economic Justice for All.” Paragraph 202 outlines key provisions, saying tax policy should be “continually evaluated in terms of its impact on the poor.”

The document said the tax system should raise “adequate revenues” to pay for society’s needs, be progressive in nature so that people with higher incomes pay higher tax rates, and exempt families living below the federal poverty line from paying income taxes.

Any shortfall that comes about because of tax reform worries Presentation Sister Richelle Friedman, director of public policy at the Coalition on Human Needs.

“It’s very, very clear what we’re doing here. We’re doing tax cuts for very wealthy individuals and corporations, many of them which pay little or nothing to begin with. In order to do that we’re looking at ways to cut programs to pay for tax cuts,” Sister Friedman told Catholic News Service.

The “Compendium of the Social Doctrine of the Church” maintains that “tax revenues and public spending take on crucial economic importance for every civil and political community. The goal to be sought is public financing that is itself capable of becoming an instrument of development and solidarity.”

Sister Friedman expressed particular concern for changes in how low-income families will be able to take advantage of the child tax credit and the Earned Income Tax Credit. Both programs have proven helpful in boosting family incomes, lifting many out of poverty.

“The majority of people don’t want to see tax cuts. They want to see better services,” she said.

Jesuit Father Fred Kammer, director of the Jesuit Social Research Institute at Loyola University New Orleans, told CNS that in the analyses he has seen, the framework under which Congress is drafting its plan falls short of church principles.

“It’s a payoff to wealthy donors (to Republican lawmakers),” he said bluntly.

The expected cuts for most taxpayers and corporations “adds to the debt of future generations,” he explained to CNS. “It’s only going to provide more revenues to the wealthy and contribute more to the inequality in American society.”

David Hebert, assistant professor of economics at Aquinas College in Grand Rapids, Michigan, called for tax reform so that the tax code would be simplified, but cautioned that Congress should protect vital public programs.

“We can simplify the tax code without doing away with some of the important programs in the country,” he said.

“What’s ridiculous are taxes we use to steer people’s behavior in particular ways,” Hebert added. “The tax code is there to provide goods and services to the community. It is not (its) role to steer people toward doing one thing or another.”

The major questions about tax reform revolve around who benefits most.

Taxpayers earning between $150,000 and $300,000 would see a slight tax increase on average because they would lose most of the deductions currently allowed, according to the center’s study.

For businesses, tax liability would be significantly reduced under the framework. Tax cut proponents have argued that such cuts will help businesses become more competitive in the world market, giving them the opportunity to expand — and that means more jobs and higher wages for the country’s workforce and, overall, higher tax revenues.

As the tax plan was being developed, Bishop Frank J. Dewane of Venice, Florida, chairman of the U.S. bishops’ Committee on Domestic Justice and Human Development, sent a letter Oct. 25 to each member of Congress reminding them of key moral principles and church teaching about tax policy.

He reminded lawmakers that the needs of poor Americans must remain foremost in any tax code revision and urged that programs benefiting poor people not be cut to pay for any potential tax cuts.

In the end, Bishop Dewane wrote, lawmakers and the country overall must remember why taxes exist.

“National tax policy is complex and its effects far-reaching. As the country wrestles with how best to raise adequate revenues to serve the common good and provide increased financial stability, you are urged to recognize the critical obligation of creating a just framework aimed at the economic security of all people, especially the least of these,” the bishop’s letter said.

Father Kammer said efforts in the past to reduce taxes for corporations and people in the highest income brackets have been reversed. He recalled that the 1981 tax cuts under President Ronald Reagan’s administration were reversed within five years after U.S. budget deficits soared and human services experienced deep roll backs. Rather than invest in expansion then, corporations bankrolled the extra revenues.

The same has traditionally held true for individuals, he added.