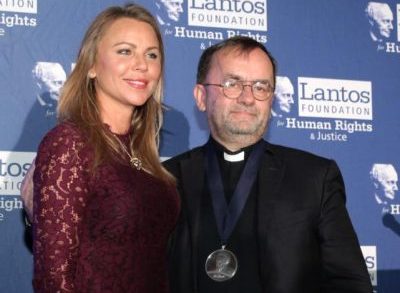 WASHINGTON (CNS) — An Oct. 26 ceremony on Capitol Hill honored French priest Father Patrick Desbois for his work for nearly two decades in researching and telling the story of genocides past and present.

But the event also challenged the audience to be vigilant and to take more responsibility for the world around them.

“We have an obligation to follow the path of Father Desbois,” said Rep. Jamie Raskin, D-Maryland, noting that the French priest continuously proved every human life matters and that everyone should speak up for human rights.

“We need people like you,” Rep. Randy Hultgren, R-Illinois, told the priest after urging the audience to always be vigilant because “so much evil is still present.”

Father Desbois is the Braman-endowed professor of the practice of the forensic study of the Holocaust at the Center for Jewish Civilization of Georgetown University. He is the founder of Yahad-In Unum, an organization based in Paris dedicated to identifying and commemorating the sites of mass executions in Eastern Europe during World War II.

At the Hill ceremony, he was awarded the 2017 Lantos Human Rights Prize for uncovering lost stories of those killed in the Holocaust and placed in mass, unmarked graves and for collecting evidence of the genocide of Yezidis, a Kurdish religious minority in Iraq, by the Islamic State.

The award, given by the Lantos Foundation for Human Rights and Justice, aims to bring attention to heroes of the human rights movement and honors the memory of Congressman Tom Lantos, a human rights advocate who served for nearly three decades as a Democratic representative of California.

Lantos was the only Holocaust survivor to be elected to the U.S. Congress. Previous recipients of the Lantos Foundation honor include the Dalai Lama, Nobel Laureate Elie Wiesel and Vian Dakhil, a Yezidi member of Iraq’s parliament.

At the award ceremony held in a congressional office building for the U.S. House of Representatives, Father Desbois spoke briefly about the need to “work hard” to convince the world to care.

He said his research has unearthed a key discovery about the evils that have happened in the world, mainly: “There is no genocide without the neighbors.”

The priest talked with people who witnessed shootings of Jews in their villages as teens or young children, and took part in small ways, by digging mass graves, moving bodies or throwing dirt on them. That made him realize “if you know you are safe, you will watch” even gruesome killings.

He also stressed that this was hardly just something of the past, as proven by recent killings of Yezidis with images captured on people’s cellphones.

“We’re living in a new period,” he said, referring to the white nationalist march in Charlottesville, Virginia, this year and the number of “pro-Hitler” books available at bookstores. The priest said young people need to be more aware of the scope of this hatred. “Many do not care about genocide and wonder why their grandparents still think about this,” he said.

CBS correspondent Lara Logan, who interviewed Father Desbois for a “60 Minutes” segment in 2015 about the priest’s work called “The Hidden Holocaust,” said her takeaway from his work is that everyone has a role to play to stop atrocities.

“In an act of walking away, you let people get away with it,” she said.

Logan, who introduced the priest at the award ceremony and presented him with the medal, told the assembled crowd that Father Desbois stressed after hundreds of interviews with bystanders at mass shootings that “nothing is more human than the capacity to kill.”

For the “60 Minutes” piece, Logan and the CBS crew went with Father Desbois to the former Soviet republic of Moldova, where he showed the unmarked gravesites where, witnesses told him, more than 1,100 victims have been secretly buried for more than 70 years. The priest’s group marked the site by GPS so history will have a record of these forgotten dead.

In a video shown at the ceremony, the priest said when he finds these sites he simply speaks to the ground and says: “I found you.” He doesn’t offer prayers out of respect for their own faith tradition.

The priest’s findings are outlined in his 2008 book, “Holocaust by Bullets: A Priest’s Journey to Uncover the Truth Behind the Murder of 1.5 Million Jews.” To date, his group, Yahad-In Unum has identified more than 600 mass killing sites and had interviewed more than 1,700 witnesses. The priest is currently working on a book to be published next year about the killings of Yezidis.

He began his study of mass execution sites in Ukraine, driven by stories his grandfather, a French soldier imprisoned in Ukraine’s Rava-Ruska Nazi prison camp, told him.

A Catholic News Service story about the priest’s early work noted that as a child, Father Desbois pushed his grandfather to tell him stories about his imprisonment which he told him was bad for the soldiers but worse for “the others on the outside.”

The need to find out who the “others” were continued to nag Father Desbois.

Then while leading a pilgrimage to Poland as a young priest in 1990, he said, it became clear to him that the group knew very little about the Holocaust. For his part, he began studying Judaism, taking part in seminars on the Holocaust at Jerusalem’s Yad Vashem Holocaust Memorial and spending time in Israel learning Hebrew.

He said it was important for him, as a Catholic priest, to do this work because Pope John Paul II called the Jewish people “our brothers.”

Although he has received numerous awards, he said getting the Lantos Foundation honor was a “proud moment to be recognized by such an active organization in the fight for human rights and decency.”

“It is a fight we must, unfortunately, carry on, as the lessons of World War II have fallen on deaf ears on so many in Europe the U.S. and across the world,” he said in a statement. “However, I accept this award with steadfast hope that human decency coupled with history will eventually cure us of the disease called genocide.”

NEXT: Knights CEO praises plan for getting U.S. aid to persecuted Christians