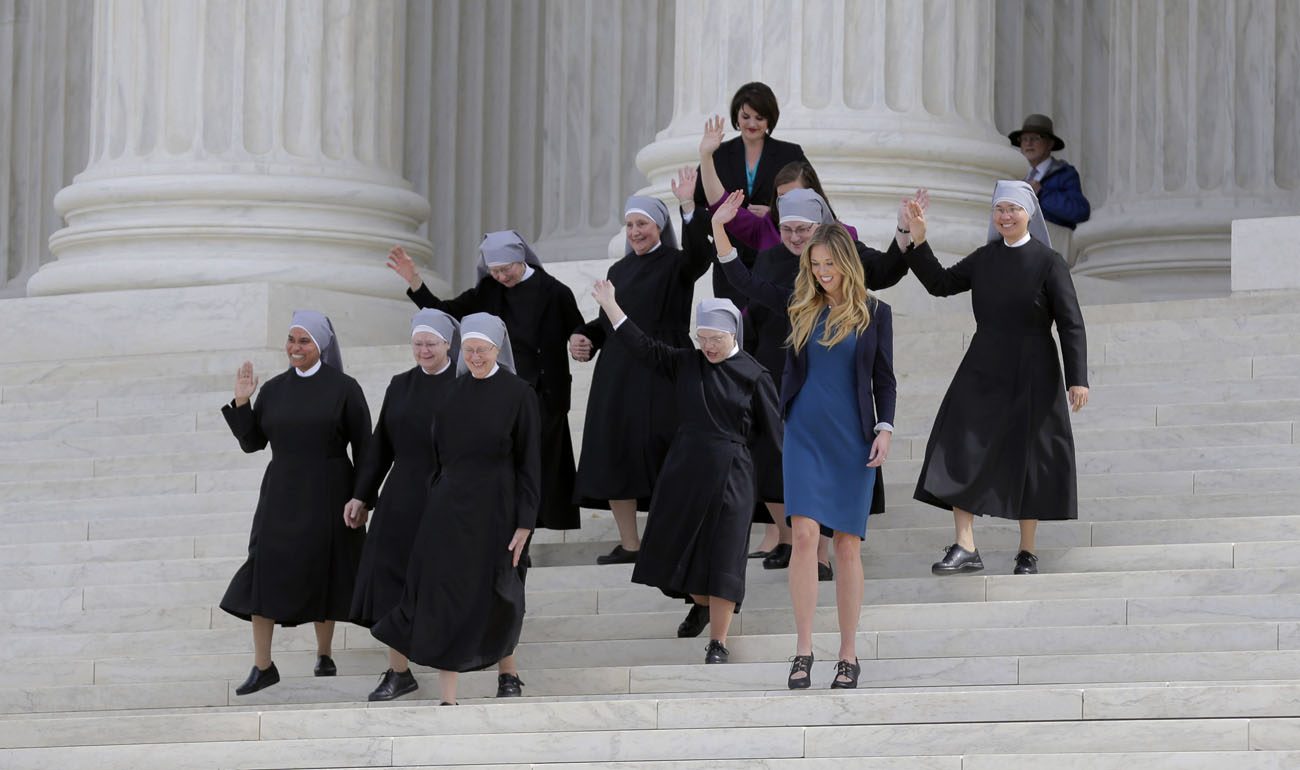 A group of Little Sisters of the Poor are joined by other women as they walk down the steps of the U.S. Supreme Court in Washington in 2016 after attending oral arguments in the Zubik v. Burwell contraceptive mandate case. All parties in the suit agreed to a settlement Oct. 16 in which church entities will not be compelled to offer health coverage to which they object on moral grounds. (CNS photo/Joshua Roberts, Reuters)

WASHINGTON (CNS) — Dozens of Catholic groups that challenged the contraceptive mandate of the Affordable Care Act have reached a settlement with the U.S. Justice Department, they announced late Oct. 16.

The groups, including the Archdiocese of Washington and the Pennsylvania dioceses of Greensburg, Pittsburgh and Erie, were represented by the Cleveland-based law firm Jones Day.

Washington Cardinal Donald W. Wuerl wrote an Oct. 16 letter to archdiocesan priests saying the “binding agreement” ends the litigation challenging the Health and Human Services’ mandate and provides a “level of assurance as we move into the future.”

The Washington Archdiocese was one of dozens of groups challenging the mandate, which went to the Supreme Court last year in the consolidated case of Zubik v. Burwell. Although it was most often described as the Little Sisters of the Poor fighting against the federal government, the case before the court involved seven plaintiffs and each of these combined cases represented a group of schools, churches or church-sponsored organizations.

Pittsburgh Bishop David A. Zubik, whom the case is named for, said he was grateful for the settlement, which he described as an “agreement with the government that secures and reaffirms the constitutional right of religious freedom.”

In an Oct. 17 statement, the bishop said the diocese’s five-year-long challenge to the mandate “has been resolved successfully” allowing Catholic Charities in the diocese and other religious organizations of different denominations to be exempt from “insurance coverage or practices that are morally unacceptable.”

He said the settlement follows the recent release of new federal regulations that provide religious organizations with a full exemption from covering items that violate their core beliefs.

On Oct. 6, the Trump administration issued interim rules expanding the exemption to the contraceptive mandate to include religious employers who object on moral grounds to covering contraceptive and abortion-inducing drugs and devices in their employee health insurance. The same day, the U.S. Department of Justice issued guidance to all administrative agencies and executive departments regarding religious liberty protections in federal law.

Cardinal Wuerl said in his letter to priests that the new guidelines and regulations were extremely helpful but that the “settlement of the Zubik litigation adds a leavening of certainty moving forward. It removes doubt where it might otherwise exist as it closes those cases.”

“The settlement adds additional assurances,” he added, “that we will not be subject to enforcement or imposition of similar regulations imposing such morally unacceptable mandates moving forward.”

The cardinal thanked the Jones Day law firm for its legal representation in the case and thanked Catholics for their prayers and support for the petitioners in the long legal fight.

Thomas Aquinas College of Santa Paula, California, one of the groups that fell under the Washington Archdiocese’s challenge of the HHS mandate to the Supreme Court, similarly thanked the law firm Jones Day for representing the school pro bono.

The school’s president, Michael McLean, said in an Oct. 16 statement that as part of the settlement, the government will pay a portion of the legal costs and fees incurred by the law firm.

He said the college welcomed the broadening of the exemption from the HHS mandate by the Trump administration in early October but he similarly said the settlement of the case provides “something even better: a permanent exemption from an onerous federal directive — and any similar future directive — that would require us to compromise our fundamental beliefs.”

“This is an extraordinary outcome for Thomas Aquinas College and for the cause of religious freedom,” he added.

The school’s statement said according to the terms of the settlement, the government concedes that the contraceptive mandate “imposes a substantial burden” on the plaintiffs’ exercise of religion and “cannot be legally enforced” under the Religious Freedom Restoration Act.

The contraceptive mandate, in place since 2012, required all employers to provide contraceptive coverage in their employer insurance. Last year when opposition to this mandate came to the Supreme Court, the justices unanimously returned the case to the lower courts with instructions to determine if contraceptive insurance coverage could be obtained by employees through their insurance companies without directly involving religious employers who object to paying for such coverage.

Erie Bishop Lawrence T. Persico, representing one of the groups that challenged the mandate, said in an Oct. 17 statement that it has been “difficult for people to understand that this lawsuit was not just about contraceptives.

“The real issue,” he said, “was the government attempting to narrow the definition of freedom of religion, using the HHS mandate to exempt only a small subset of religious employers. Churches were declared exempt, but their hospitals, Catholic Charities agencies, schools, and universities were not.”

The bishop said he was pleased with the settlement particularly because the church continues to assert that all of its ministries “are inextricably tied to the practice of our faith.”

Mark Zimmermann, editor of the Catholic Standard, newspaper of the Washington Archdiocese, contributed to this report.