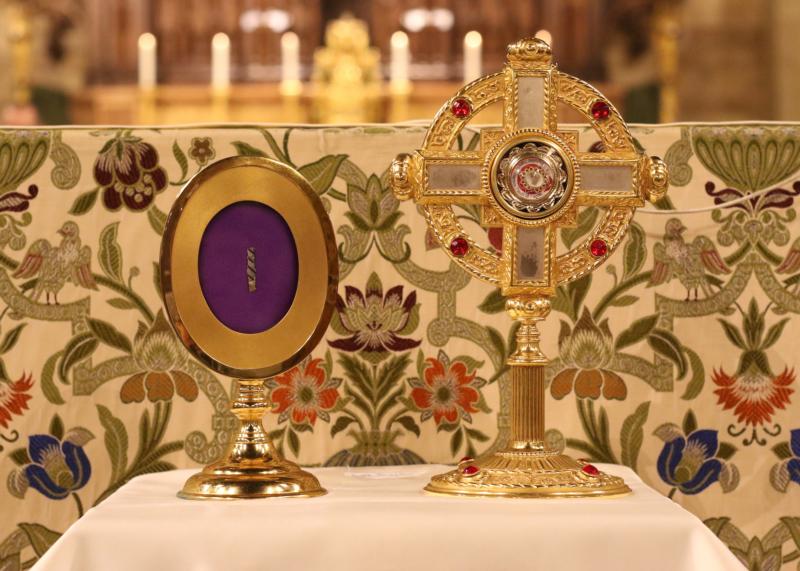 Reliquaries containing relics of Sts. Jacinta Marto, left, and John Paul II are displayed in front of the altar prior to a vigil Mass Oct. 12 celebrated in honor of Our Lady of Fatima at St. Vincent Ferrer Church in New York City. St. Jacinta was one of the three children to whom Mary appeared in Fatima, Portugal, in 1917. Oct. 13 marked the 100th anniversary of the sixth and final Marian apparition in Fatima. (CNS photo/Gregory A. Shemitz)

NEW YORK (CNS) — St. John Paul II “looked at the world with Mary’s eyes and saw man in need of mercy,” the postulator of the pope’s canonization cause told Massgoers Oct. 12 at St. Vincent Ferrer Church in New York.

“Mary’s eyes are the eyes of a mother. Her gaze embraces us and reads what is in our hearts,” said Msgr. Slawomir Oder, who was the homilist at a special vigil Mass to mark the 100th anniversary of the last Marian apparition at Fatima, Portugal.

Mary appeared to three shepherd children at Fatima in 1917. She first appeared May 13, and the apparitions continued once a month until Oct. 13.

“Mary looks at us with a mother’s tenderness and she is able to reach our hearts to see our deepest needs,” Msgr. Oder said. “In her eyes, there is no judgment and condemnation. There is only maternal love.

“She looks at us in the same way as she looks at her Son beneath her heart. The tenderness of Mary’s maternal glance is a prelude to mercy,” Msgr. Oder said. “It invites us to come to her, so that we can experience it ourselves.”

Msgr. Oder came from Rome for the vigil Mass Oct. 12. The principal celebrant was Archbishop Bernardito Auza, the Vatican’s permanent observer to the United Nations.

After Mass, Dominican Fathers Gabriel Gillen and Thomas More Garrett held reliquaries containing relics of St. John Paul and of St. Jacinta Marto, one of the Fatima visionaries, for veneration by members of the congregation.

Last May, on the 100th anniversary of the first Marian apparition at Fatima, a shrine was dedicated at St. Vincent Ferrer Church to the memory of St. John Paul. He credited Mary with saving his life after an assassination attempt in Rome on the feast of Our Lady of Fatima in 1981.

Msgr. Oder said was “willing to part with a small piece of the cloth if we could find a fitting place for the relic to be venerated,” Father Garrett said. The priest is associate director of the St. John Paul II Society that was established in early 2017 in anticipation of receiving the relic and creating the shrine.

The pastoral care of St. Vincent Ferrer is entrusted by the Archdiocese of New York to the Dominican order.

In his homily at the Oct. 12 Mass, Msgr. Oder told the congregation that St. John Paul made “his life a gift for the church and for his brethren.”

“He was not one to just sit back and watch, but when, after the attempt against his life on May 13, 1981, he realized that his life was given to him for the second time, then and there he gave it completely to God through Mary,” the priest said.

During the beatification process for the now-canonized pontiff, he recalled, the Marian aspect of the pope’s spirituality was brought up many times. “As one witness put it beautifully and eloquently, ‘John Paul II learned to look at the world with the eyes of Mary,'” Msgr. Oder said.

Pope Francis recently described Mary “as a vessel to receive mercy and the spring of God’s mercy,” he continued. “These two images, the vessel and the spring, let us immediately understand the essence of freedom taught by Mary: Take the gift of God and bring it to others.”

“This is the dynamics of holiness! The saints were able to receive mercy in a particular historical reality, often marked by suffering, the experience of weakness and limitations. This openness to God’s mercy made them people of a new heart,” the priest said.

He said the “tenderness of Mary’s maternal glance is a prelude to mercy. It invites us to come to her, so that we can experience it ourselves.”

“Mary looks at us with maternal insight,” he explained. “She can understand the pain one is suffering and what the body and spirit need.”

“This capacity of insightful perception is the basis of what we call the ‘imagination of love,'” Msgr. Oder said. “That is, the ability to meet these expectations and needs, which man cannot or is ashamed to say. In meetings with John Paul II, we experienced something very similar. He had the ability to speak to our hearts, and his speaking was the voice of a caring father.”

Msgr. Oder said that “to be able to perceive as Mary does also means being able to see the good in man. Her look can penetrate the depths of the human soul and bring out the good that is present in it. After all, every man is created in the image and likeness of God.”

He told the story of Sister Teresa from Myanmar, and how during one of the last papal audiences she attended, she was able to talk with St. John Paul. She was nervous and didn’t know what to say. “The only thing she could ask was, ‘Holy Father, what does it mean to be a saint?'” Msgr Oder recounted.

“The pope did not say a word, but looked at her, embraced her and pressed her to his chest, so that she was able to hear his heartbeat,” the priest said. “She told me that for her it was a very powerful answer. ‘To be saint’ means to embrace people and make them hear the love present in your heart!'”