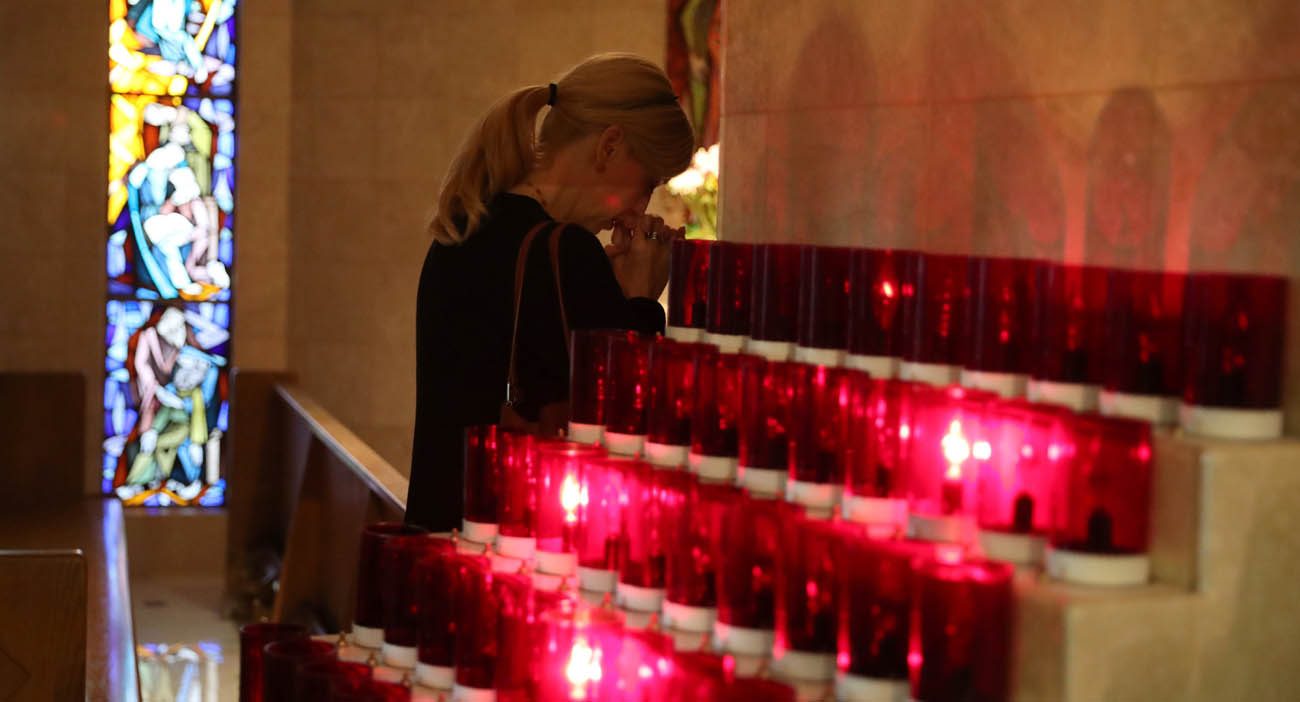 A woman prays during an interfaith memorial service Oct. 2 in Las Vegas for victims of a shooting spree directed at an outdoor country music festival late Oct. 1. A gunman perched in a room on the 32nd floor of a casino hotel unleashed a shower of bullets on the festival below, killing at least 59 people and wounding another 527. (CNS photo/Lucy Nicholson, Reuters)

UPDATED – WASHINGTON (CNS) — Students at St. Viator Parish School in Las Vegas began school Oct. 2 — hours after the mass shooting in that city — by praying the rosary together in the school gym.

The school is just three miles east of the Las Vegas Strip, the location of most of the city’s largest hotels and casinos, and the site of the Oct. 1 mass shooting at a musical festival that left 59 people dead, including the shooter, and wounded more than 500.

“Many of our students’ family members work in the hotels on the Strip so obviously there was a lot of concern when we started hearing of the horrible events that were occurring on Sunday evening,” said Viatorian Brother Rob Robertson, school counselor.

A few students had attended the Route 91 Harvest festival, the outdoor country music concert barraged by gunfire from a shooter on the 32nd floor of the adjacent Mandalay Bay casino resort hotel. A fourth-grade student who attended the concert told his classmates his guardian angel had been watching over him that night.

Several parents who had been at the concert decided to keep their children at home the next morning, saying they needed to help their children process the event as a family.

One mother who had been at the concert brought her sons in to school late the next day “understandably shaken by what could have been” and by the horrible scene she witnessed right in front of her, Brother Robertson told Catholic News Service in an Oct. 3 email.

“It was soon very obvious as a parish that we needed to respond to our parishioners who needed a comforting moment of solace,” he said, noting that the young adults in the parish organized a candlelight Taize prayer service Oct. 2 attended by several hundred people.

At the prayer service, people approached the cross at the front of the altar and knelt down for private prayers. One of the couples that came forward was still wearing their wristbands from the concert.

At St. Anne Church in Las Vegas, three miles north of the Las Vegas Strip, many of the parishioners know someone who went to the concert — a niece, a friend or a neighbor — said Msgr. Gregory Gordon, pastor.

The priest told CNS Oct. 3 that no parishioners lost their lives at the concert, but some were injured and all came back terrified.

He has been to the local hospital to administer the anointing of the sick to some of the concert’s wounded and said he is on call and would immediately go again if needed.

For now, the city which has so often been a partying atmosphere, remains somber, the priest said. Billboard messages thank people for their generosity and ask for prayers instead of highlighting upcoming shows.

Msgr. Gordon, said the packed interfaith prayer service Oct. 2 at Guardian Angels Cathedral, coincidentally on the feast of the Guardian Angels, included many prayers for peace.

He said he had never heard the song “Let There Be Peace on Earth” sung as loudly as it was it was that night.

It was as if it were “coming from the hearts of everyone,” he said.

Masses and prayer services have been taking place across the city since the shooting.

“For its reputation as sin city, Las Vegas is a very religious, compassionate and helpful city,” said Brother Robertson, noting this has been proved by the thousands of people who lined up to give blood and the money raised to help families affected.

He said his parish, like many others, has been collecting items – especially restaurant gift cards — to be donated to the local hospitals to give to the family members who have flown into the city from all over the country to be with their wounded family members.

Kim Sennes, a parishioner at Holy Spirit Catholic Church in Summerlin, Nevada, about 10 miles away from the Las Vegas Strip, said her parish has also been involved in collecting items and celebrated a Mass Oct 3 praying for healing and peace in the wake of the shootings.

She said they are reacting to the tragedy with no information about “what was in this guy’s head,” referring to 64-year-old shooter Stephen Paddock. The community has been supporting and caring for victims and their families and has contributed to multiple GoFundMe accounts to help pay for burials.

She said at the daily Masses at her parish, especially the day after the shooting, so many people’s eyes were swollen from crying.

“You realize how vulnerable you are” when something like this happens, she told CNS Oct. 4, especially in an area where there are so many outdoor gatherings, like the Oct. 1 country music festival. A “sense of numbness” still hangs in the region days after the shooting and the common expression from everyone is: “I’m so sad.”

Sennes, who is 72, and has lived in the Las Vegas area for almost 40 years, has three daughters in the area and six grandchildren. She told one of her daughters who felt so affected by the massacre — comparing it to how she felt after the Sept. 11 attacks — that instead of letting it bring her down she should “become a strong advocate for changing things” such as supporting gun control measures.

The other action is continued prayer, said Brother Robertson. “We are praying for a world where light will overcome darkness. That is what our Lord promises us and we cannot give in to the evil that visits us here and wherever it occurs.”

NEXT: Pennsylvanian sees making of a saint in Italian friend’s faith, sacrifice