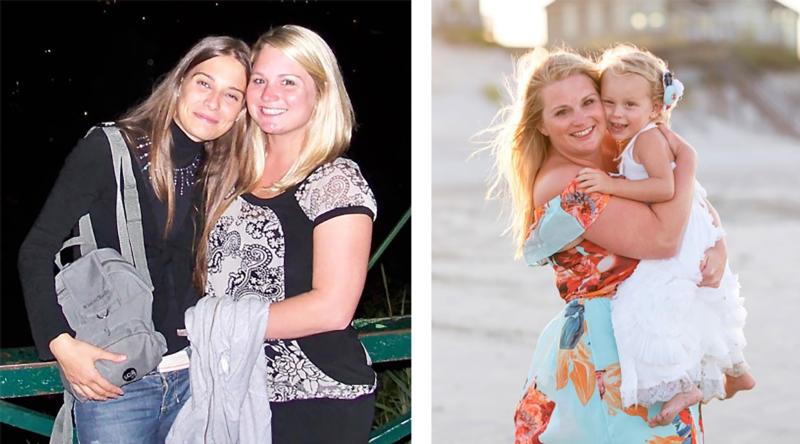 The bond of friendship between Chiara Corbella Petrillo and Jennifer Pellegrine Sloss is an enduring one, despite Chiara’s death from cancer in 2012. The two women are pictured at left in Italy a few evenings before Chiara’s September 2008 wedding to Enrico Petrillo. After learning of her friend’s death in 2012, Jennifer, then the mother of two sons, prayed, “Chiara, send me a little brown-eyed girl.” Jennifer is pictured with her daughter, Chiara. (CNS photo/courtesy Jennifer Pellegrine Sloss)

ALTOONA, Pa. (CNS) — A self-described “bratty teenager,” always thinking about “me — what I want,” 18-year-old Jennifer Pellegrine of Altoona was blown away when, as an exchange student, she met Chiara Corbella of Rome in 2001.

“She was totally opposite of how I was,” Jennifer recalled in a telephone interview this summer with The Catholic Register, official publication of the Diocese of Altoona-Johnstown. “Chiara was such a good person, and so much nicer to be around than I was at that time.”

Her new Roman friend made a deep impression on the Altoona teen. Chiara returned to Altoona with Jennifer for a month’s stay, and their friendship blossomed into a bond that would last until Chiara’s death — and beyond.

Now married to Eric Sloss, Jennifer resides with her husband and their three children — Rowan, 7, Carson, 6, and Chiara, 3 — in Tyrone, where the older children attend St. Matthew School. And yes, the youngest of the Sloss children is named for her mother’s special friend, a young woman who died at age 28 in 2012.

“As soon as I got to Italy, I knew there was something different about Chiara,” Jennifer said of her friend. “She always had a big smile on her face. She always cared about you — she cared about everyone. There was a real kindness about her.”

Their bond continued as the two young women grew up. Chiara returned to Altoona in 2008 for Jennifer and Eric’s wedding, and later that year the newlyweds traveled to Italy for Chiara’s wedding to Enrico Petrillo, a man she met and fell in love with on a pilgrimage to the Marian shrine at Medjugorje, Bosnia-Herzegovina.

Jennifer and Chiara had plans of taking vacations together, introducing their children to one another and growing older as the very best of friends.

Jennifer shared her friend’s joy when Chiara became pregnant with her first child, a daughter, and mourned when the little girl, Maria, died just after birth. The next year Chiara gave birth to a son, Davide, who like his older sister suffered from birth defects, and died within minutes of being delivered.

“It was when her babies died that I really came to understand Chiara’s special strength,” said Jennifer. “She was so strong. Her faith was strong. She believed that everything was for the best. Chiara believed there was something bigger and better than this life.”

Tragedy continued to haunt Chiara and Enrico Petrillo. Pregnant for a third time, it was discovered in her fifth month that Chiara was suffering from cancer.

“There was never, ever any thought in her mind of having an abortion,” Jennifer said, “and she refused all treatment until Francesco was born. She wouldn’t do anything that might harm her baby.” And on June 13, 2012, when her little son was just over a year old, Chiara died.

Jennifer learned of the depth of her friend’s spirituality when Chiara was diagnosed with cancer.

“She told me ‘It’s OK. I’m going to heaven to raise Maria and Davide, and Enrico will be here to raise Francesco. Don’t be sad about it, because I’m not sad.'”

“What love she had for her children!” Jennifer exclaimed. “Chiara made the ultimate sacrifice; she gave her life for the sake of the life of her child.”

In July, an AP story in the Altoona Mirror daily newspaper caught Jennifer’s eye — about a new document from Pope Francis approving a fourth pathway to possible sainthood: giving one’s life in a heroic act of loving service to others. The article made mention of her dear friend Chiara as someone who could possibly be named a saint based on that criterion.

The pope approved new norms allowing for candidates to be considered for sainthood because of the heroic way they freely risked their lives and died prematurely because of “an extreme act of charity.”

“I knew that a movement had started to explore the idea of recognizing Chiara as a saint, but never thought I’d see her name in the local paper,” she said

And yet, encountering a newspaper story about her friend is not untypical of how Jennifer and Chiara’s relationship continues to develop. “She does little things for me to let me know she’s here,” Jennifer said. “I pray to her — I talk to her. When I have a big decision to make I’ll say, ‘OK Chiara, what would you do?’ My life has changed since I met her.”

Jennifer believes that anyone learning about Chiara and her life-giving sacrifice will find their life changed, too. “Everyone would be a better person if they learned about her and tried to be more like her. She teaches us to remember ‘It’s not all about me!’ The happiness of others must always come first.”

Jennifer continues to be in touch with Enrico Petrillo, who travels extensively telling his wife’s story. And Jennifer has shared that story with her children. “They never met her, but they know who she is. They appreciate her, and they will always know her.

“I want my daughter to know how she got her name, and to be proud of it. She has some very big shoes to fill!”

At a time when the Diocese of Altoona-Johnstown is promoting the cause of Demetrius Augustine Gallitzin, a servant of God, who was a Russian prince who became a pioneer priest as the “apostle of the Alleghenies,” it now has close ties to the cause of a young woman who prayed at Our Lady of Mount Carmel Church in Altoona, who attended an Altoona Curve baseball game and who continues to inspire the life of one local family.

“Everyone who met Chiara when she visited here, loved her,” Jennifer said.

Msgr. Stein is editor of The Catholic Register, newspaper of the Diocese of Altoona-Johnstown.

NEXT: Panel: Efforts to protect life at all stages has never been more important