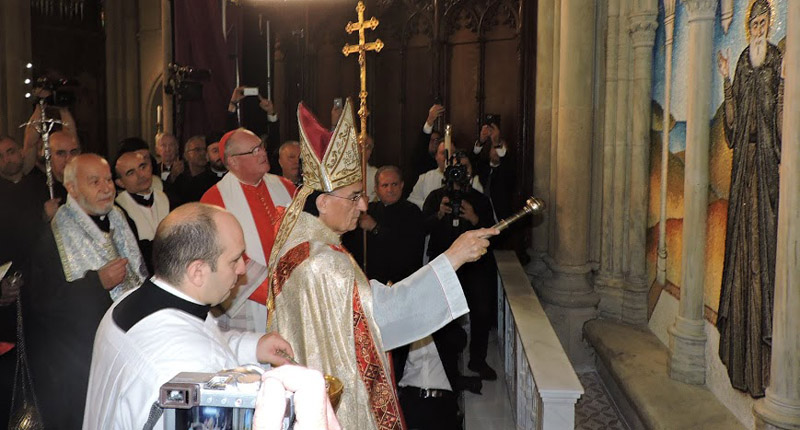 NEW YORK (CNS) — Cardinal Bechara Rai, patriarch of Maronite Catholics, inaugurated a chapel to Lebanon’s St. Charbel in St. Patrick’s Cathedral. The chapel is the first of its kind outside Lebanon.

“St. Charbel is a sign of hope for Christianity and for all the people of the Middle East who suffer in difficult circumstances,” Cardinal Rai said in his homily Oct. 28 at a Mass at the cathedral. New York Cardinal Timothy M. Dolan and Bishop Gregory J. Mansour of the Maronite Eparchy of St. Maron of Brooklyn concelebrated the Mass.

“We are here in New York and the United States to hear the voices that speak to us about the Middle East,” said Cardinal Dolan.

The artistic mosaic sanctuary depicts St. Charbel wrapped in a luminous halo in the Lebanese mountain, near the St. Maron monastery in Annaya, Lebanon, where his tomb is located. The saint is surrounded by flourishing cedars and crystalline waters of the Mediterranean, a symbol of spiritual life.

The 19th-century Lebanese Maronite monk had a strong devotion to the Eucharist. He was canonized by Blessed Paul VI in 1977.

St. Maron’s Monastery says it has approximately 26,000 documented miracles attributed to the intercession of St. Charbel, not just in Lebanon but worldwide. It says that, lately, at least 10 percent of recipients of miracles are nonbaptized individuals, including Muslims, Druze, Jews and atheists.

PREVIOUS: ‘We must remember compassion is contagious,’ says Pacem honoree