‘We must remember compassion is contagious,’ says Pacem honoree 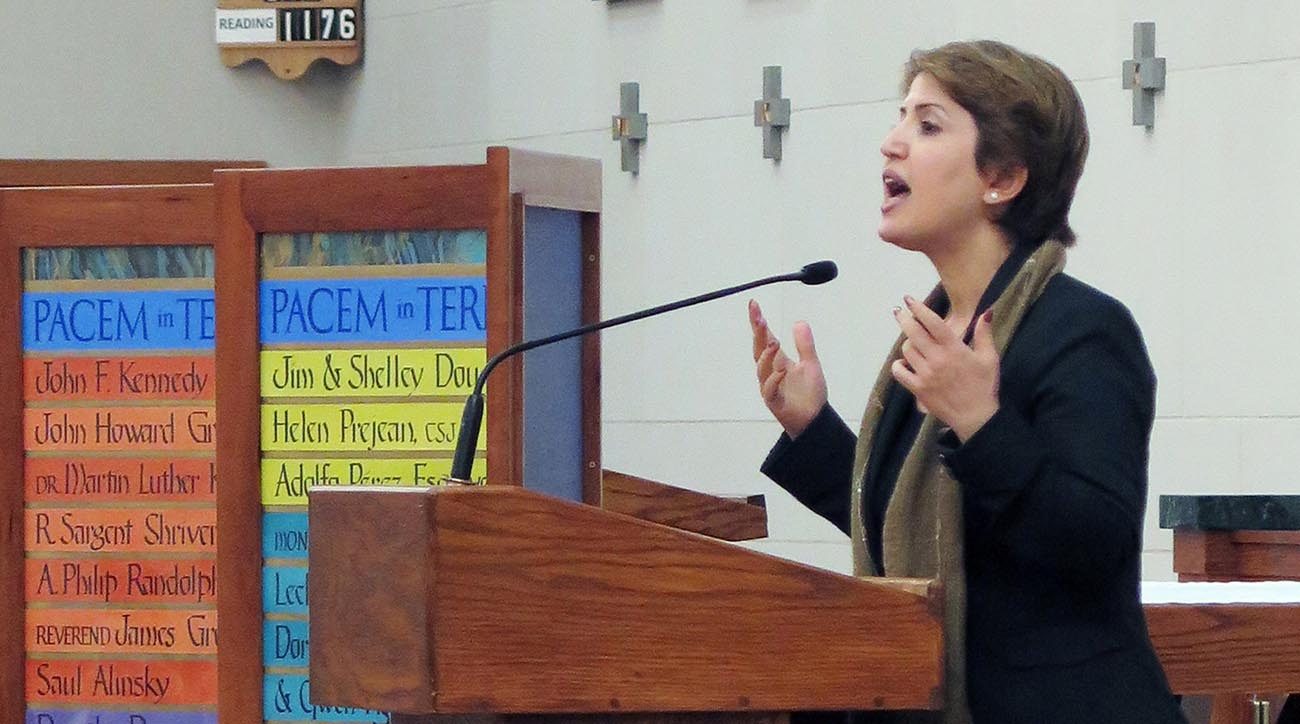 DAVENPORT, Iowa (CNS) — As a young child living in the Kurdistan region of Iraq, Widad Akreyi survived the Iraqi government’s offensive against the Kurds in the mid-1970s.

That and other experiences of persecution convinced her to choose a path toward peace and justice, to which she has committed her life’s mission. Her selfless commitment to human rights for all inspired the Pacem in Terris Peace and Freedom Coalition to select her as the 47th recipient of the award first given in 1964.

Bishop Thomas R. Zinkula of Davenport presented the award to Widad Oct. 22 during a ceremony in Christ the King Chapel on the St. Ambrose University campus. He also presented the first One Among Us Justice Award to Nora Dvorak, a longtime volunteer in social justice in the diocese.

Widad, who is also a scientist with a doctorate in global health and cancer epidemiology, gave a passionate speech about what she has witnessed, moving some in the audience to tears.

During the first persecution she experienced, Widad recalled hearing her mother cry for help as she ran with 5-year-old Widad to safety.

Weakened by malnutrition, “my head was dangling from her right arm,” she said. Six years later, war broke out between Iraq and Iran. “During that war, our homeland was attacked three times. By the grace of God, we survived.”

War with Iran hadn’t ended yet in 1987 when the Iraqi authorities waged a new war against the Kurds, this time using chemical weapons. Iraq called this military operation “Anfal,” which is the title of a chapter in the Quran, Widad noted.

Young girls and women were enslaved, accused of being infidels. Many other Kurds escaped, but thousands of children and elders died because of hunger and harsh weather conditions. Girls and women were sold as slaves in other countries, Widad said.

Survivors didn’t give up. “The more divisions the Iraqi authorities cultivated, the more we worked for a solution,” Widad said. “The more aggression they showed us, the more time we devoted to peace and reconciliation. The more civilians they tortured and slaughtered, the more my instincts guided me to reach out to all segments of society

“The more they tried to erase the evidence, the more risk we took to document the atrocities and the horrors inflicted on humans and the environment,” she continued. “Because, one day the world will wake up and realize … the repercussions of overlooking the suffering. And on that day the souls of the victims will finally find peace.”

She referenced genocides that have occurred in the region over the last century, beginning in Armenia in 1915, and raised concerns about “crimes against humanity” that have been occurring over the past years around the world.

However, she sees glimmers of hope. The tragedies have brought people of different backgrounds, cultures and religions (or no religion) together to advocate for justice and peace, she said.

“Those tireless supporters have tried to make a difference one act of kindness, one act of solidarity, one act of charity at a time. They did so because they believe all humans are born free and equal in dignity and rights. They believe in acting toward one another in a spirit of humanity because human rights are universal and justice and peace are human rights.”

Targeted populations prefer to leave, but she urged her audience to think about the ramifications.

The goal of oppressors is “to change the demographics of a certain area,” she said. “If we only think of bringing people out, we may be helping the perpetrators of the genocide achieve their goal.”

Widad cautioned the audience that easy solutions to the crises around the globe are not possible.

“We must roll up our sleeves and rekindle a commitment to peace built on freedom and justice,” she said. “We must strengthen our collective moral and ethical devotion to protect liberty, enhance human dignity, and put an end to genocide and to eradicate slavery.”

At one time, the town in which she grew up thrived with diversity. Christians, Jews, Muslims and people of other faiths coexisted peacefully. That’s the future she dreams of: every community fostering diversity and peaceful coexistence.

“We must remember compassion is contagious. The more we spread it the more people will cherish it and share it,” she said.

Bishop Zinkula was impressed with the passion and intensity Widad conveyed. Her commitment to the causes she espouses “is contagious,” he said. “I thanked her for accepting this award as well as for the inspiration she provided to us.”