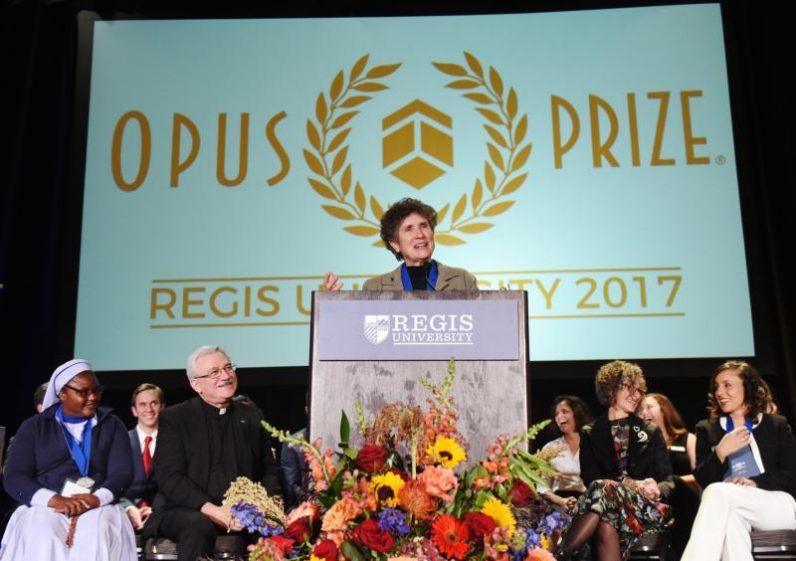 DENVER (CNS) — It would have been impossible to walk away from a downtown Denver hotel where this year’s Opus Prize was announced Oct. 12 and not feel that urge to “go forth and set the world on fire.”

Working in Haiti and South Sudan, Sister Lacey and her California-based organization are helping women and girls escape extreme poverty through educational, economic and empowerment opportunities.

The Opus Prize Foundation funds the $1 million award and also awards two finalist prizes of $100,000 each in recognition of social entrepreneurship. The foundation partners with a university or college to present the honor and “to inspire the next generation to pursue lives of service.”

The prize is awarded annually to an individual or organization of any religious background, anywhere in the world. Recipients must demonstrate a pioneering approach to solving the root cause of social problems in their community.

“I felt called by God to help these women and girls who are suffering,” Sister Lacey commented. “In serving others, we can find a connectedness, a kinship that leads to binding joy.”

One finalist prize went to Sister Stan Terese Mumuni, a member of the Marian Sisters of Eucharistic Love, who is the founder of Nazareth Home for God’s Children in Ghana. It cares for children born with physical, mental or behavioral disabilities.

The other $100,000 prize went to Drs. Jason Reinking and Noha Aboelata, whose work through Roots Community Health Center is providing health care to impoverished people living on the streets of Oakland, California.

“Your work truly restores hope and ignites the possibilities for those who live at the margins,” Father Fitzgibbons said, addressing all three finalists. “We are inspired and moved by your example.”

NEXT: New shrine enables Catholics to renew devotion to Fatima