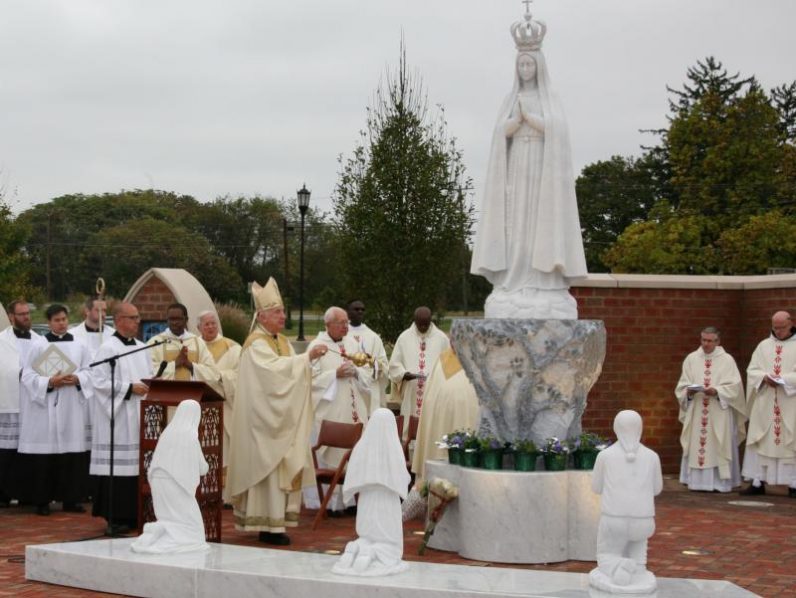 CHARLES TOWN, W.Va. (CNS) — A new shrine to Our Lady of Fatima in West Virginia invites Catholics “to live the Fatima message with renewed commitment and gives us the means to do so,” said Bishop Michael J. Bransfield of Wheeling-Charleston.

The new shrine next to St. James Church in Charles Town will enable Catholics “to pray the rosary with greater devotion and to be renewed in our dedication to the Immaculate Heart of Mary,” the bishop said to the congregation at Mass Oct. 14. Following the liturgy, he dedicated the new shrine.

Hundreds gathered for a moment long anticipated by the parish community including many from the surrounding area and Virginia, who began the day by gathering in the new shrine to pray the rosary that morning.

They then proceeded to the church, where Bishop Bransfield celebrated the special Mass with area priests concelebrating.

The day for the shrine’s dedication was fitting, the bishop said in his homily, because the Catholic Church was marking the 100th anniversary of Mary appearing to three shepherd children at Fatima, Portugal. She first appeared May 13, 1917, and the apparitions continued once a month until Oct. 13, 1917.

The new shrine will be a place for Catholics to connect with Mary, he said, and make the rosary a central part of their prayer life.

The bishop expressed his and the diocese’s gratitude to Tony Braddock for bringing the 10,000-square-foot shrine to the Diocese of Wheeling-Charleston. It was funded through the Alfred and Barbara Braddock Foundation through the generosity of Tony, because of his lifelong devotion to Mary. He started the foundation in honor of his parents.

“I am so very grateful to Tony Braddock, who conceived of the idea of this Shrine of Our Lady of Fatima and who diligently sought a place to build it,” Bishop Bransfield said in his homily.

“Convinced of the importance of having a place to meditate upon Our Lady’s message at Fatima, he generously responded to challenges along the way and finally found this place,” the bishop said. “Together with the help of our own Deacon Dave Galvin, Tony brought this shrine into being, giving us a place to gather with Our Lady and seek answers to the questions of our hearts.”

Following the Mass, the bishop led all in a procession to the new shrine. Everyone gathered around as the bishop blessed the shrine and consecrated the Diocese of Wheeling-Charleston to the Immaculate Heart of Mary. 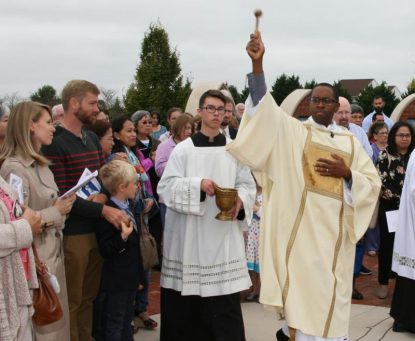 “The result of the shrine, how it turned out, was beyond my expectation,” Tony Braddock said. “It turned out more beautiful than I anticipated. It’s a conglomerate of the rosary. It’s everything that our Blessed Mother asked at Fatima.”

At Fatima, he said, Mary asked that the rosary be prayed daily and the first Saturday of five successive months be made in reparation to the Immaculate Heart of Mary.

“I hope,” he said, “that it (the shrine) will be an inspiration to people to observe and help the Immaculate Heart of Mary, especially in these times that we live in.”

At the center of the new shrine is a statue of Our Lady of the Rosary with statues of the three children of Fatima kneeling and praying before her. The statues of the children are spaced so that those who visit can kneel between them and pray.

Another statue is of St. John Paul II. He is holding a bullet, which recalls the assassination attempt on his life on the feast of Our Lady of Fatima May 13, 1981. He is giving thanks to Mary for saving his life. The image of a second bullet is in the crown of the statue of Our Lady of the Rosary. (Two bullets lodged in the pope’s lower intestine.)

The third statue is of the Angel of Peace, who also appeared to the children at Fatima.

The shrine is encased by a 2-and-a-half-foot wall with four semicircles, each featuring the mysteries of the rosary. In between each one of those semicircles are two angular walls with a bronze plaque and a picture showing part of a Fatima apparition. The floor of the shrine depicts the rosary.