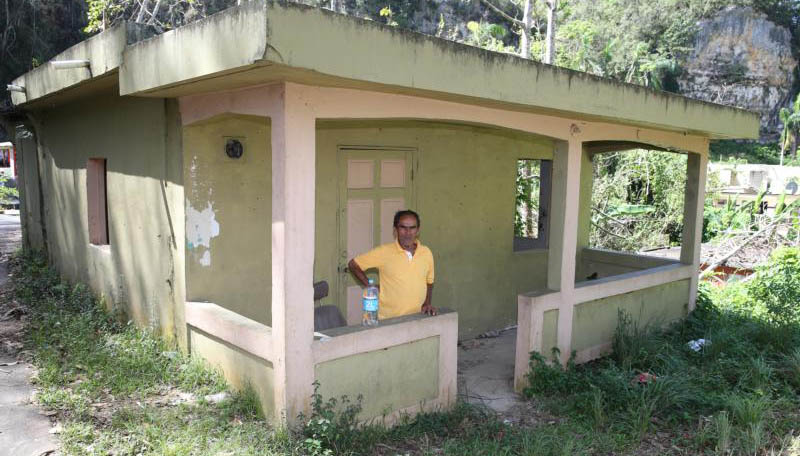 Jose Perez, pictured Oct. 21, stands outside the home he was in when Hurricane Maria devastated Guajataca, Puerto Rico. The town has been without power or water for more than a month after the hurricane devastated the island. (CNS photo/Bob Roller)

LARES, Puerto Rico (CNS) — Hurricane-related deaths in Puerto Rico have been attributed to drowning and illness, but many Puerto Ricans, including local media professionals, see a link between such deaths and poverty.

“One has a higher probability to die in a hurricane if one is poor,” said Ismael Perez Acosta, 71, who lives alone in a rural shanty in Lares. His 87-year-old house, almost completely covered by vegetation and barely seen from the road below, is a dilapidated small wooden structure built by his grandfather.

Perez has no income, surviving on donations and casual odd jobs. His water comes from a stream that flows next to the house, a structure that has no electric power connection.

“There are many people like me, who normally live (under conditions) like a hurricane went by every day,” said Perez, who has some college education from the Pontifical Catholic University of Puerto Rico in Arecibo. “But to many people we are invisible, even though maybe we are the majority (of the island’s population).”

Poverty in Puerto Rico is a largely unspoken legacy of colonial times, when agriculture was the island’s main source of wealth, and it goes as far back as slavery. Many of today’s poor are descendants of a working class whose status has morphed since the Spanish arrival in 1493.

That line started with black African slaves and white Spanish laborers. Blacks mostly toiled on sugar cane fields in the lower coastal flatlands, and whites worked on coffee and fruit plantations in the central mountains.

After slavery ended in 1873, both groups’ work and social status went through several labor-social arrangements with wealthy landowners — including a scheme of unpaid work in exchange for use of a small plot of land for personal farming and living — commonly known as “arrimados” or “agregados.”

“My grandfather used to work on this land, and then my father,” said Perez, “first as a sharecropper and then as an ‘arrimao,'” living on the employer’s land without a title but receiving a salary.

Jose Perez, no relation to Ismael, lives in the financially depressed Guajataca sector of Quebradillas. His old concrete house had its metal windows blown out by Hurricane Maria Sept. 20 while he was inside.

“I was very scared, listening to the noise and the wind, but didn’t want to leave my house,” he told CNS Oct. 21. “In the middle of the night, I felt my mattress wet, so I went to the other one I have (both on the floor), and that one also got wet. So I curled up in a corner and just waited.”

Jose Perez also spoke of the relationship between poverty and deaths.

With the main road following a gorge, this area of Guajataca practically became a huge muddy lake during Hurricane Maria’s flooding. Weeks later, the receded waters uncovered several abandoned vehicles that had ended stuck in the foliage.

Guajataca was declared one of the most dangerous areas in Puerto Rico after Hurricane Maria, because a nearby dam was threatening to break, which would have washed away thousands of homes. The U.S. Army Corps of Engineers took charge of the situation and was working on the necessary repairs.

Like many poor people in central Puerto Rico, Jose Perez had relatives in the area, but over the years, most moved away. Many moved to cities like Arecibo and San Juan, but lately most move to the mainland United States.

“I have relatives around here, but most of my family moved to the U.S.,” he said, “and this house was practically abandoned by one of my sisters.” Although it obviously had some damage previous to Hurricane Maria, at the moment the house was completely empty, except for a tiny kerosene stove. He said relatives and friends stop by once in a while to bring him food “and other things.”

“These days I spend my days here, to see what happens,” he said, “and on Sundays I go to the (Catholic) chapel up that way, where I get a nice lunch.”

According to 2016 Census Bureau statistics, close to 1.5 million Puerto Ricans — 43 percent — live below the U.S. poverty line, almost double the rate of Mississippi, the poorest U.S. state. Census figures also show that 55 percent of those 16 or older were employed before Hurricane Maria. The U.S. Department of Labor shows Puerto Rico’s unemployment rate was 10 percent.

Although locally, poverty is commonly considered a rural problem, it extends to Puerto Rico’s cities. San Juan, where the average tourist sees only the neatly conserved areas, has severely economically depressed pockets.

A few steps west of the territorial capitol building, for example, La Perla neighborhood is a constant reminder of the presence of extreme poverty. Located on a narrow stretch of land exposed to ocean threats outside the city walls, La Perla grew during the 19th century as a place to house freed slaves, domestic servants, a slaughter house and the city’s cemetery.

Martin Pena Channel neighborhood is an example of the effects of massive exodus from the countryside in the 1930s. As highlighted by a “PBS NewsHour” show in 2016, “the area is strewn with trash, breeds mosquitoes, and is a health hazard for nearby residents. Due to the narrowing of the channel over time, the area is subject to frequent flooding, including raw sewage from buildings with insufficient sanitation.”

La Perla and Martin Pena are among the San Juan neighborhoods most damaged by hurricanes.

“Those who are poor have little money,” said Ismael Perez. “Little money gives us weak houses; weak houses don’t survive a hurricane; more people die in weak houses. … That’s why poverty is the cause of most deaths (in a hurricane).”

NEXT: Faith, culture fused in a day to remember deceased loved ones