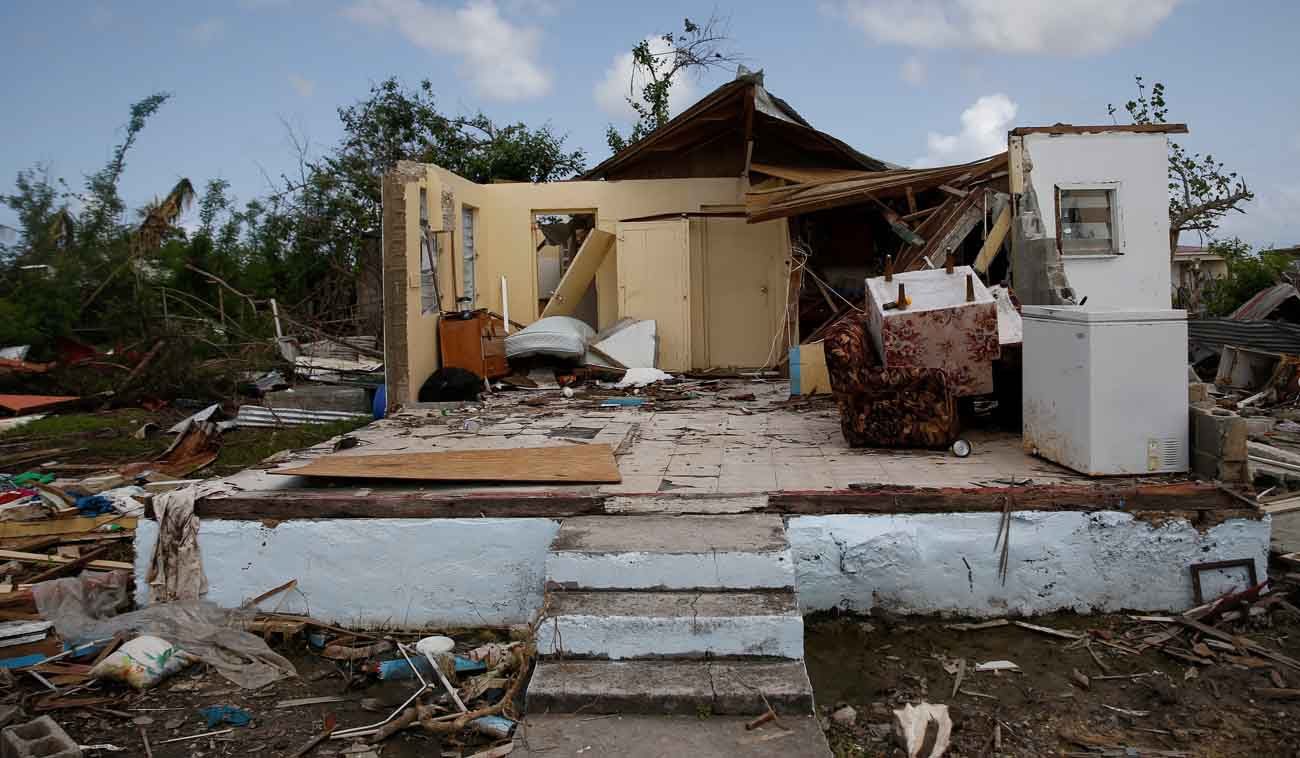 A home is seen in Barbuda Oct. 7, one month after Hurricane Irma struck the Caribbean island. (CNS photo/Shannon Stapleton, Reuters)

ST. JOHN’S, Antigua (CNS) — After Hurricane Irma decimated the Caribbean island of Barbuda, Bishop Gabriel Malzaire, president of the Antilles bishops’ conference, said the country should be given a break from paying its debts while it rebuilds after the storm.

“This is not the first disaster of this kind and nor is it likely to be the last in the region,” the bishop of Roseau, Dominica, said in a Sept. 14 letter to Christine Lagarde, managing director of the International Monetary Fund. “We call upon you to provide the most vulnerable nations of the Caribbean with the option of an immediate stay of payments and automatic debt restructuring in the case of future natural disasters.”

Bishop Malzaire’s position is simple: Small governments trying to recover after disasters should spend their limited resources on rebuilding schools, hospitals, roads and homes. Repaying lenders should be put on hold.

It didn’t take long for Bishop Malzaire’s prediction about the next big storm to prove correct: Less than a week later, Hurricane Maria destroyed his island, Dominica, killing at least 26, ripping apart homes, and flattening government buildings. It was the second Category 5 storm to hit the Caribbean in September.

“Now, the needs are even starker. Addressing the issue of debt relief is absolutely essential,” Bishop Malzaire told Catholic News Service in a telephone interview. “This will directly affect the capacity of these countries to rebuild.”

In the wake of one of the most disastrous hurricane seasons in history, the proposal to cancel or restructure debts for small islands has gained new traction, propelled by Catholic leaders, religious charities and Caribbean politicians trying to rebuild after hurricanes that caused billions of dollars in damage.

International lenders, including the IMF and World Bank, and private creditors have not formally adopted the measures. But the idea has gained endorsements from a wide array of world leaders, from billionaire Virgin Group founder Richard Branson to Cardinal Daniel N. DiNardo, president of the U.S. bishops’ conference.

In a Sept. 20 letter to the IMF, Cardinal DiNardo said flexibility on the part of lenders “would allow resources to be allocated toward life-saving short- and medium-term stabilization processes.”

Even before the storms, the Caribbean was among the most indebted regions in the world, with several governments owing more than the value of their gross domestic product. Puerto Rico entered a bankruptcy-like process in May when it could no longer keep up with payments on its $123 billion in debt and pension obligations. Neighboring U.S. Virgin Islands, made up of three islands and just over 100,000 people, owes billions from years of borrowing. Both U.S. territories saw extensive damage from the hurricanes.

San Juan Archbishop Roberto Gonzalez Nieves and Bishop Herbert Bevard of St. Thomas will travel to Washington in early November to address Congress on the need for long-term aid to help rebuild as well as the importance of debt relief.

On smaller islands that were wiped out by the hurricanes, including Dominica and Antigua and Barbuda, governments are facing whether to spend money on recovery or keep up with debt payments.

“There is going to be the need for a tremendous amount of funds to rebuild these islands,” said Bishop Robert Llanos, apostolic administrator of the Diocese of St. John’s-Basseterre. Bishop Llanos, whose diocese includes Antigua and Barbuda and the British Virgin Islands, said governments are planning to rebuild with an eye on preparing their islands for future major storms.

Eric LeCompte, executive director of Jubilee USA, a Washington-based charity working with religious organizations to push for debt relief, said the additional costs of rebuilding more safely put governments in a bind: If they miss debt payments, their credit scores could be negatively affected, making it more difficult and costly to borrow in the future. Alternatively, they could be forced to borrow more from private lenders.

“Putting these governments further into debt is the last thing we want to happen,” LeCompte told Catholic News Service. Under the debt relief plans that have been promoted, the countries would not be penalized for missing payments. Islands could also be made eligible for low-interest loans, LeCompte said.

“Debt relief is the most direct and efficient way of freeing funds for these governments to respond to the human needs on the ground,” he said.