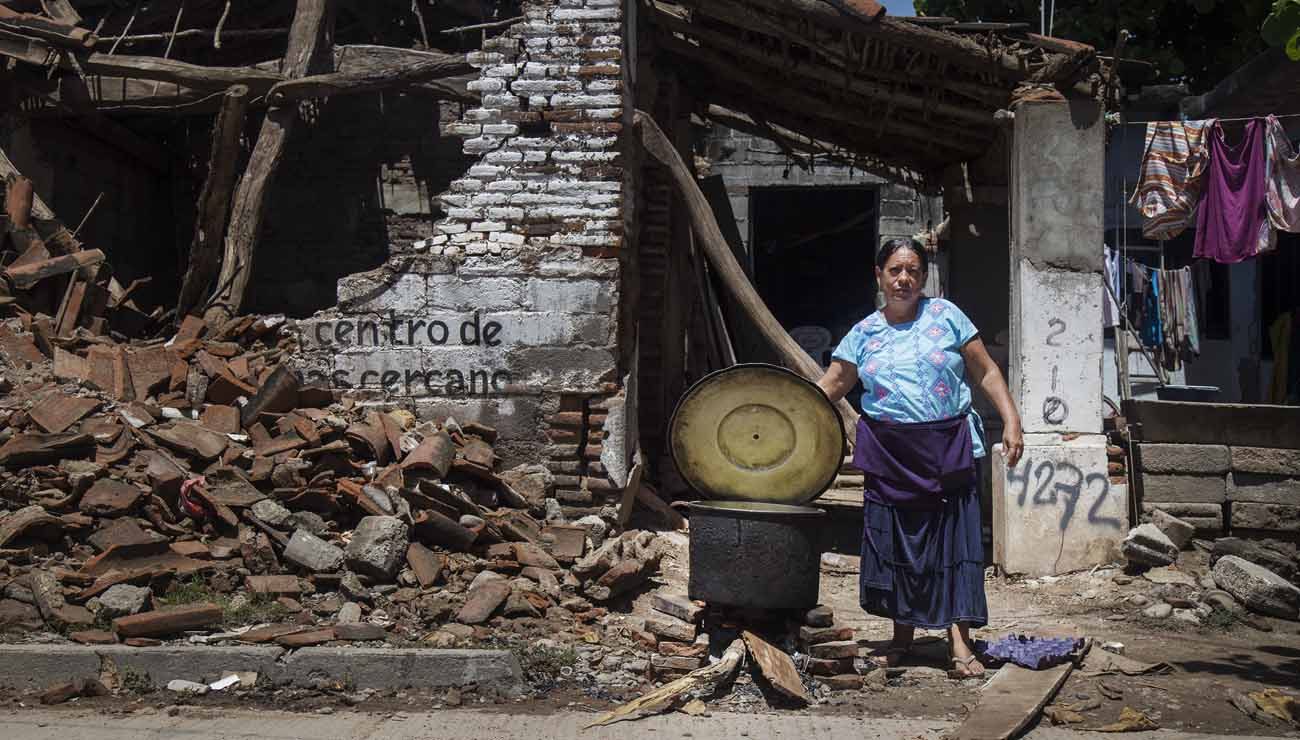 A woman in Juchitan, Mexico, cooks next to a house destroyed during the September earthquakes in this Oct. 6 photo. The Mexican bishops' conference and Caritas Mexico announced the charitable agency had raised more than $900,000 to assist with relief and rebuilding. (CNS photo/Luis Villalobos, EPA)

SAN LUIS POTOSI, Mexico (CNS) — The Mexican bishops’ conference and Caritas Mexico announced the charitable agency had raised more than 17.3 million pesos (US$900,000) to assist with relief and rebuilding after twin earthquakes struck the country in September. The money will be used to build relief centers and shelters for those who were left homeless or displaced.

“We will work in community centers,” Father Rogelio Narvaez, executive secretary of Caritas Mexico, said Oct. 23 in Mexico City. “With the current contribution of the church in Mexico, we can build enough units in the affected places.”

The first earthquake leveled parts of southern Oaxaca and Chiapas states, leaving 100 dead and damaging more than 100,000 homes. The second earthquake struck just south of Mexico City, claiming 369 lives in the national capital and in the outlying states of Morelos and Puebla.

Mexicans responded to the earthquakes with generosity and solidarity, though some attitudes have turned to anger as corruption was uncovered. For instance, some buildings — especially in Mexico City — had been constructed in violation of local regulations.

Complaints also surfaced over allegations politicians in some places were pilfering donations, including those collected by Caritas. Church officials promised to be good stewards of what was donated.

“Each peso is sacred for the person donating it. We have to follow through on what they donated it for,” Father Narvaez said. “It’s sacred to us, we can’t break that bond of trust.”

The centers opened by Caritas are expected to provide space for distributing relief supplies to those in need, rooms for religious communities to continue their educational outreach and places for catechism classes and celebrating Mass.

Space will be offered for providing psychological and spiritual support.

Many in Mexico are on edge.

Strong aftershocks have rattled southern Mexico. In Mexico City, 63 percent of people said they were still nervous after the earthquake, according to a poll by Ipsos. Another 38 percent said they “avoided thinking or speaking” about the temblor.

Part of the reason the centers were deemed important is the destruction done to churches across the country. At least 996 Catholic churches were damaged in 19 different dioceses, according to the bishops’ conference. Additionally, some 80 priests had their parish residences destroyed.

NEXT: Refugees fearful as India plans to deport Rohingya