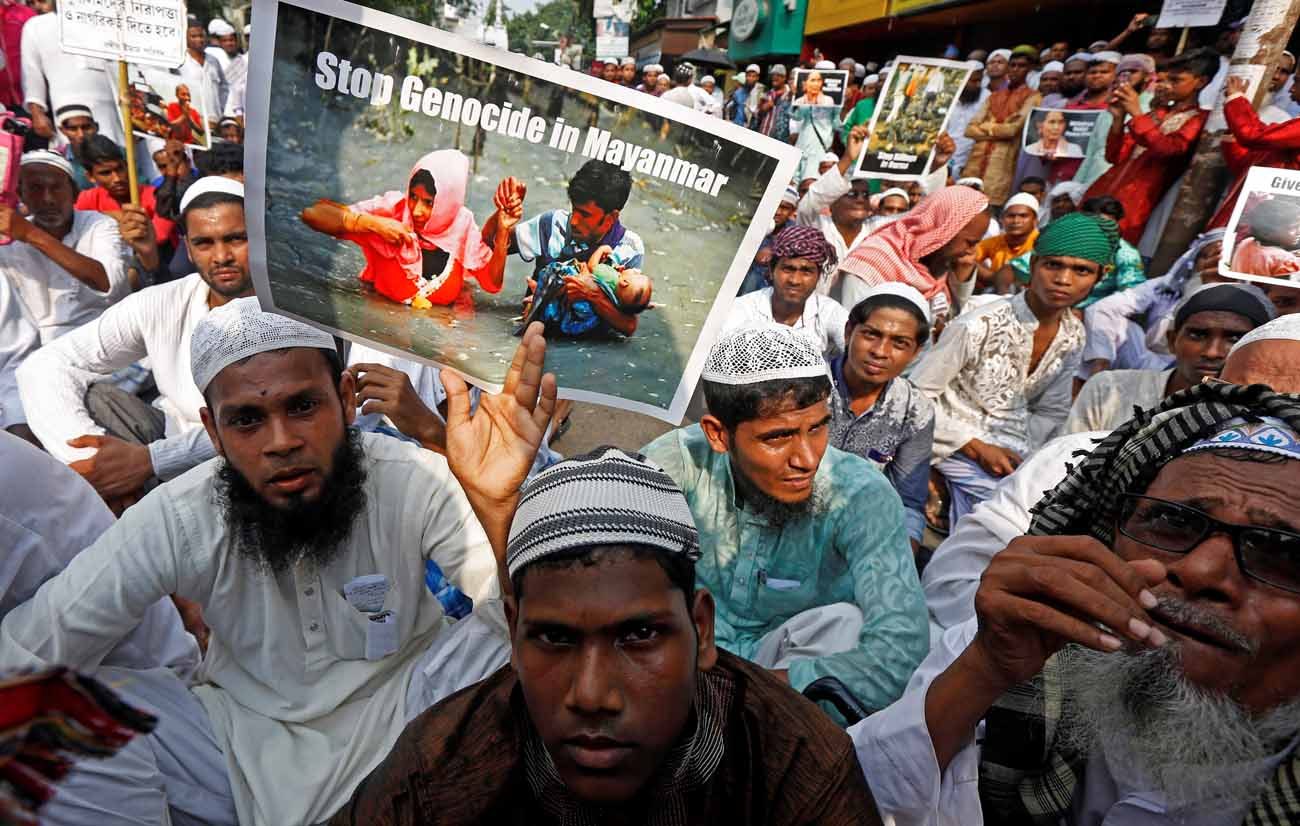 Men in Kolkata, India, demonstrate Oct. 24 against what they say are the killings of Rohingya people in Myanmar. Fear has gripped Muslim Rohingya refugees in India following a hardening of New Delhi's insistence that Myanmar take them back. (CNS photo/Rupak De Chowdhuri, Reuters)

While the majority of 600,000 Rohingya fleeing a military crackdown in Myanmar over the past two months have gone to Bangladesh, some have traveled to countries such as India and Nepal, reported ucanews.com.

Earlier waves of Rohingya refugees ended up in India.

“Nothing has changed in Myanmar, so how can we go back?” asked Mohammad Hanif, who three years ago came to the capital, New Delhi, following attacks on his community in Myanmar’s Rakhine state.

Hanif, who collects recyclable waste for a living, told ucanews.com that his family’s aim was not to acquire luxuries, but to avoid death and destruction.

The call dovetailed with New Delhi’s determination to deport many of the 40,000 Rohingya refugees dispersed in several Indian cities. The Indian government recognizes fewer than 14,000 as refugees and categorizes the rest as illegal migrants deserving of deportation.

Hanif earns 250 to 400 Indian rupees (US$4 to US$6) a day that he says is enough to survive in the polyethylene-covered shack his family calls home. His 6-year-old daughter goes to a nearby government school.

“We face immense hardships, but there is no threat to our lives,” he said, adding that return to Myanmar would constitute a death sentence.

In New Delhi’s Rohingya shanty settlements, residents such as 70-year-old Asad-ul-Islam have to travel long distances to get drinking water. He loads plastic drums onto a cart during the fading light of early evening to reduce the danger of harassment when obtaining water for his family, including his pregnant daughter.

Earlier this year, unidentified men in the city beat a young man when they found out that he was a Rohingya Muslim.

“We still don’t know who the men were, but some people do not like our presence in India,” Asad-ul-Islam said.

Rohingya sometimes falsely claim that they are from the northern Indian state of Assam in a bid to dodge potential hostility.

“We still live in abject poverty here as we used to in Rakhine state,” Asad-ul-Islam said. “But there we used to get killed like some unwanted species.”

NEXT: Kenyan nuns work to educate voters before Oct. 26 election