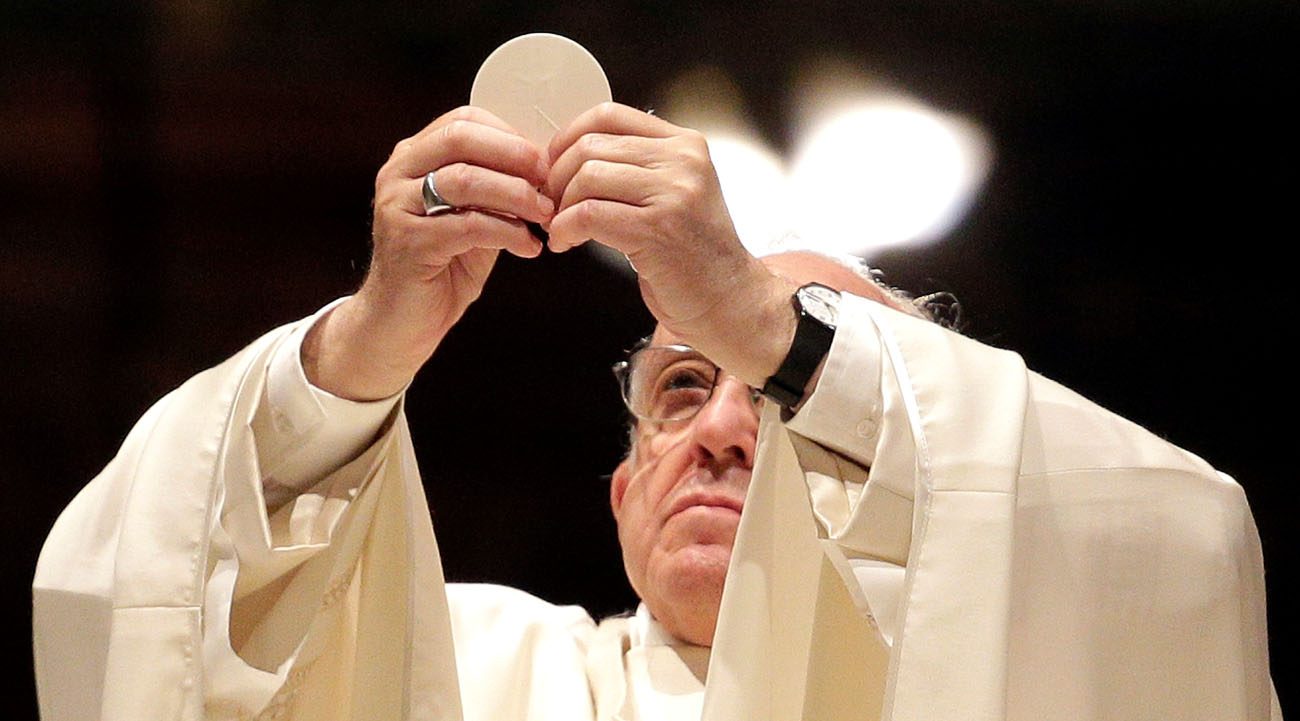 Pope Francis celebrates Mass during the 100th anniversary of the founding of the Vatican Congregation for Eastern Churches Oct. 12 at St. Mary Major Basilica in Rome. (CNS photo/Max Rossi, Reuters)

VATICAN CITY (CNS) — No matter how much suffering Christians face in the world, God never forgets those who trust in and serve him, Pope Francis told leaders of Eastern Catholic churches.

The courage to “knock at the door” of God’s heart and “the courage of faith (are) needed when you pray — to have faith that the Lord is listening,” the pope told patriarchs, metropolitans, bishops, priests and lay members of the Eastern churches during his homily in Rome’s St. Mary Major.

The special Mass of thanksgiving Oct. 12 marked the 100th anniversary of the establishment of the Congregation for Eastern Churches, an office that supports the Eastern Catholic churches, and the Pontifical Oriental Institute, which offers advanced degrees in Eastern Christian liturgy. During the morning Mass, the Sistine Chapel choir sang with a choir of Eastern seminarians studying in Rome, and an Eastern priest chanted the day’s Gospel reading in Arabic.

In his homily, the pope recalled the congregation was founded during the tumultuous time of World War I and that, today, another kind of world war continued to rage with “so many of our Christian brothers and sisters of the Eastern churches experiencing tragic persecutions and an ever-more disturbing diaspora.”

The 23 Eastern Catholic churches include the Chaldean, Syriac Catholic, Coptic Catholic, Melkite and Maronite churches as well as the Ukrainian Catholic Church, the largest of all the Eastern churches. Their presence in the East and Middle East has been threatened by decades of crises, oppression and war.

Pope Francis said the difficult situations they face beg many questions, most of all, “Why?”

How many times do they hear from the lay faithful or experience the feeling that “We see the wicked, those with no scruples, look out only for themselves, crushing others, and it seems that everything goes so well for them, they get whatever they want, and they only think about savoring life,” the pope said.

Like in the day’s first reading from the prophet Malachi, the people wonder why evildoers prosper. But God tells them he listens “attentively” and has noted all those who fear the Lord and trust in him no matter what, the pope said.

“God does not forget his children, his memory is for the righteous, for those who suffer, who are oppressed and ask, ‘Why?’ and yet they do not stop trusting in the Lord,” the pope said.

“How many times the Virgin Mary, on her journey, asked herself, ‘Why?’ But in her heart, which reflected on everything, God’s grace made her faith and hope shine,” he said.

What is needed is the courage to “knock on God’s heart” and pray. “When you pray, you need the courage of faith,” the “courage to knock at the door” and the faith that God is listening, he said.

Like the Gospel says, “Ask and you will receive,” God will always give his greatest gift: his Spirit, he said.

Before the Mass, Pope Francis visited the nearby Pontifical Oriental Institute and greeted the members of the Congregation for Eastern Churches as well as the patriarchs and major archbishops the congregation supports.

With students gathered in the garden, the pope blessed a cypress tree, and then he met with guests and the Jesuits who run the educational institute.

The pope gave them a written message asking them to reflect on ways the school can continue to fulfill its mission given that the dictatorships of the past have often left behind fertile terrain for the spread of global terrorism.

“No one can close their eyes” to the current situation of persecution against Christians and their forced exodus from their homelands, he said. Many now find themselves settled in Western nations where Latin-rite parishes and dioceses are the norm.

He invited the pontifical institute, which helps members of the Eastern churches strengthen their faith before the many challenges they face, to prayerfully listen to “what the Lord wants in this precise moment.”

It may be, “for example, encouraging future priests to instill in their Eastern faithful, wherever they find themselves, a deep love for their traditions and the rite they belong to; and at the same time, to sensitize bishops of dioceses of the Latin rite to take on the task” of offering adequate spiritual and human assistance to these families and individuals.

PREVIOUS: Death penalty is ‘contrary to the Gospel,’ pope says