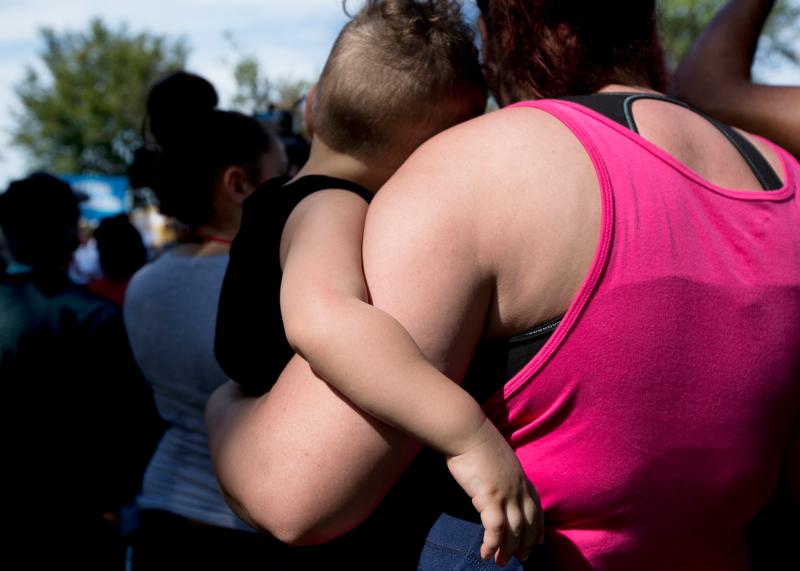 A woman holds a child during an immigration rally near the U.S. Capitol in Washington Sept. 26. Archbishop Ivan Jurkovic, Vatican observer to U.N. agencies in Geneva, said Oct. 12 that overly strict immigration laws do not discourage migration, and more must be done to keep migrant families together. (CNS photo/Tyler Orsburn)

VATICAN CITY (CNS) — Overly strict immigration laws do not discourage migration, and more must be done to keep migrant families together, a Vatican representative said.

“The migrant family is a crucial component of our globalized world, but in too many countries the presence of the families of migrant workers is often legally impeded,” said Archbishop Ivan Jurkovic, Vatican observer to U.N. agencies in Geneva.

“If we truly wish to leave no one behind, we must devise frameworks that help keep families together, including migrant families. The human vacuum left behind when a father or a mother migrates alone is a stark reminder of the toughness of the choice to migrate and of the fundamental right to be able to stay at home in dignity,” he said.

Archbishop Jurkovic spoke Oct. 12 about regularized migration during a U.N. session preparing for a global compact for migration dedicated to facilitating safe, orderly and regular migration around the world.

“A tangible sign of increasing inequalities, socio-economic imbalances and unregulated globalization,” he said, is the fact that there are some 1 billion people in the world with some sort of migratory status.

The constant and increased recourse to irregular or illegal ways to migrate is yet another symptom of a system that does not manage migration effectively, he said.

“Regrettably, all too often, the response to irregular migration is a short-term one, with a strong emphasis placed on security,” he said.

“But while it is right and just to respect the legitimate interests of the receiving countries, it is possible and highly recommended to reconcile these interests with migrants’ rights,” he added.

Some ways to do that, he said, would include keeping migrant families together as well as making available more legal and “dignified pathways” for migration.

“Desperation and hope always prevail over restrictive policies. Unfortunately, the same is true for profits, hence, turning to an irregular workforce becomes the likely response when there is a strong demand for ‘cheap’ labor,” he said.

Policies should also be attentive to the hidden problems migrants may face when in a country illegally, the archbishop said.

“They find themselves ignored and neglected, gripped by the constant fear of expulsion or deportation. Out of desperation, they are compelled to accept dangerous work conditions, and often end up being exploited and abused,” he said.

“Indubitably, every state has the sovereign right and responsibility to regulate the movement of people and should do so with a clear system of migration laws,” Archbishop Jurkovic said.

“However, the approach to migration in all of its aspects, including irregular migration, should begin first and foremost from the perspective of the human person, and his or her fundamental rights as such, with special attention given to unaccompanied minors, the elderly, and those with special needs.

“In this regard, states should avoid the criminalization of irregular migrants and ensure the respect of the principle of non-refoulement,” that is, to forbid countries from forcibly returning asylum seekers to a country where they would likely be persecuted.