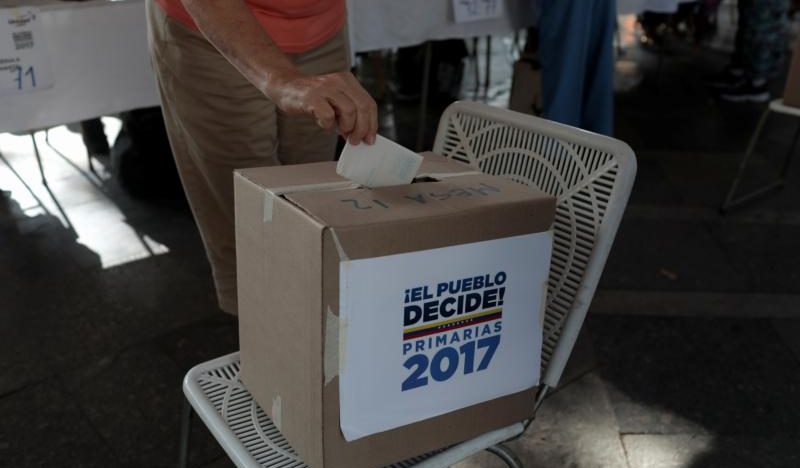 A woman casts her vote at a polling station Sept. 10 during the primary election of candidates for governors in Caracas, Venezuela. Venezuelans will elect governors for all 23 states Oct. 15. (CNS photo/Marco Bello, Reuters)

“Given the very stormy situation that our country is going through, these elections are a light for those who believe in and defend democracy,” said the seven-point statement, released Oct. 6.

Venezuelans will elect governors for all 23 states Oct. 15. Divisions remain among government critics regarding the process; many advocated continuing street protests against the government instead of participating in the election.

Four months of continual street demonstrations ended in August after the government successfully installed a new assembly to rewrite the country’s constitution and the opposition coalition agreed to participate in elections. More than 120 people died during the conflicts, and many in the opposition boycotted the election.

A high turnout in the gubernatorial election could give an overwhelming victory to the political opposition, but if most of its supporters stay home, the results could be more balanced.

“Let’s not be overcome by the mistrust and disinterest,” the bishops wrote. “To not vote means a sentence for ourselves and the future generations to live a life with essential shortages, such as food, medicines, and personal safety.”

The country is in the fourth year of an economic crisis that has led to shortages of basic food products and medicines and the world’s highest inflation. One study showed that 75 percent of the population has lost an average of 19 pounds as a result.

The bishops also called on the country’s electoral authority to act fairly. The agency is highly mistrusted in the country because many believe officials altered vote totals for the July 30 Constituent Assembly election.

“The whole country knows the political tendency with their leaders,” the bishops said, “but we want to remind them that they should work for the Venezuelan people and not for political sectors.”

The bishops’ conference has ramped up criticism of Venezuela’s socialist government in recent months and its plans to rewrite the country’s constitution. In July, the bishops even said socialist leaders hope to install a military dictatorship.