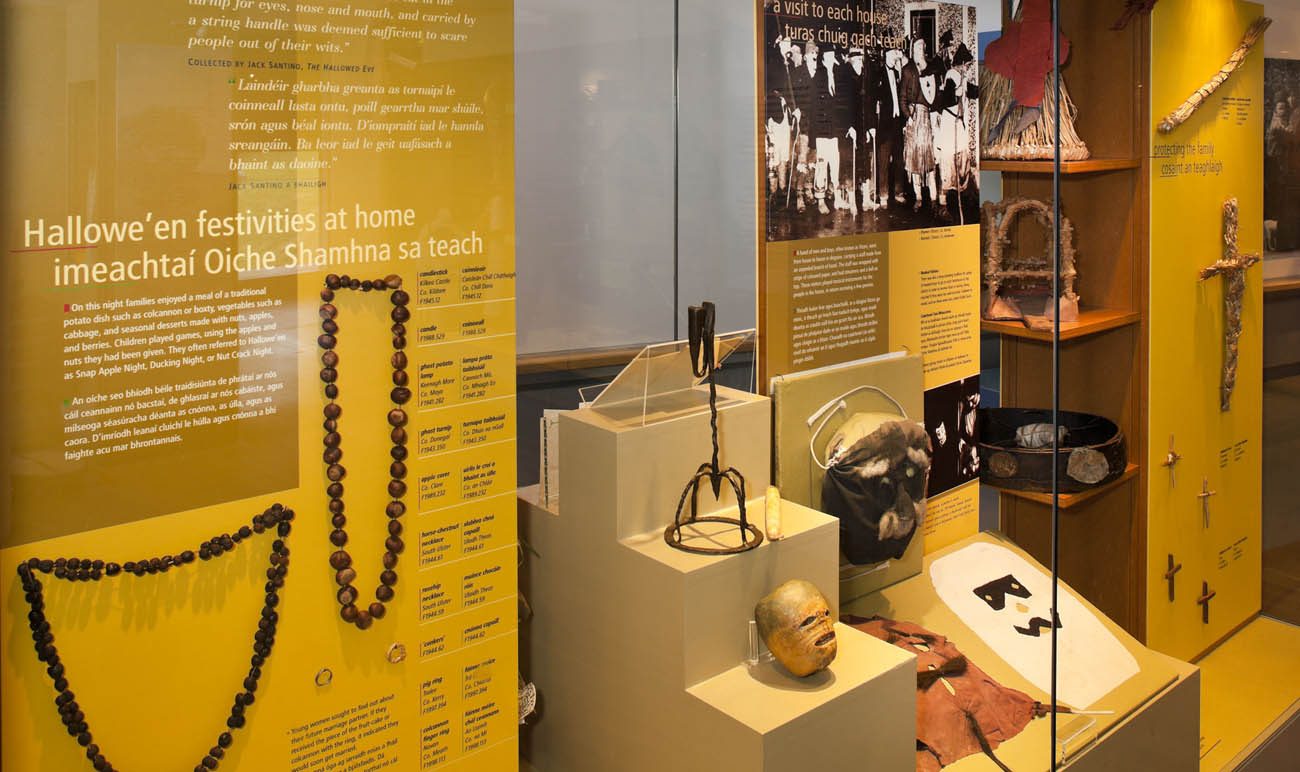 A Halloween gallery display is pictured at the Museum of Country Life in County Mayo, Ireland. (CNS photo/courtesy National Museum of Ireland)

DUBLIN (CNS) — As the seasonal carving of pumpkins gets underway, an Irish folklife expert said there is evidence that the tradition, which is synonymous with Halloween jack-o-lanterns in the United States, actually began in Ireland.

Clodagh Doyle, assistant keeper at the Irish Folklife Division of the National Museum of Ireland, told Catholic News Service that records in the folklore archives at University College Dublin document what people traditionally did at Halloween in the past.

One tradition recorded, dating to the 19th century, is the making of Halloween lanterns, usually with a turnip but sometimes a large potato.

However, Doyle threw cold water on the likelihood of finding evidence to link a particular emigrant with taking this tradition to the U.S.

“I don’t think we are going to find the direct connection, but we can definitely say they were being made in Ireland,” she said.

The Museum of Country Life in County Mayo, where Doyle is based, has two examples of these lanterns as part of its exhibition on Irish customs and traditions associated with the ancient Celtic festival of Samhain, the predecessor of the modern Halloween holiday.

The ghost turnip, with its pinched angry face, was made for Halloween. the museum has a plaster cast made of the original turnip lantern, which was close to disintegration.

“The records we have for the lantern from Donegal show it was donated in 1943 by a schoolteacher in the village of Fintown, who said she was donating it because nobody was making this type of lantern anymore, though it was a tradition that was remembered in the area,” Doyle explained. The teacher’s lantern dated back 40 years, which would date it to the turn of the 20th century. 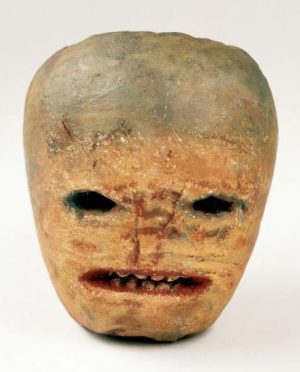 A 19th century jack-o-lantern from Fintown in County Donegal, Ireland, is part of a display at the Museum of Country Life in County Mayo, Ireland. (CNS photo/courtesy National Museum of Ireland)

Samhain’s association with winter and death in nature made it a time for remembering those who had died and a time for seeking protection for the home and the family. Holy water was sprinkled on around the threshold and on the family, animals and the farm.

One Halloween tradition that has not survived is the making of small wooden or straw crosses. Four of these Halloween crosses are currently on display in the Museum of Country Life.

“I think it is was about protecting yourself from the dark season of the year, because it was a time of death for everything on the land,” Doyle explained.

Halloween also was known as “ghost night” or “spirit night,” when the souls of the dead were expected to return to the family home. This, Doyle points out, was linked to the remembrance of the faithfully departed on All Souls’ Day, Nov. 2.

“There was a belief that the dead of your family might want to come home on that night, so people set out a place or food as a welcome to them,” Doyle said. “People believed that there were a lot of souls of the dead walking around, trying to find their way, and that not all of them were going to be good — there could be evil spirits too.”

Halloween was also a favorite time for divining the future. Marriage divination was especially popular. Often, a ring was put into the traditional bairin breac cake, and whoever received the lucky slice was destined to be the next to marry.

But 77-year-old Father John McHale of Enniscrone parish in County Sligo told CNS that, when he was a child growing up in North Mayo, he did not like the divination side of Halloween.

“It wasn’t nice, but it was common. They would bring out a saucer of clay and other things like the bairin breac with the ring in it. The one we all dreaded was the clay, as it was supposed to predict death.”

For children, the feast was mostly about games, while the young adults went about at night playing tricks on one another or on neighbors.

One side of Halloween that is no longer popular is the sacrament of confession.

“Practically to a person, all the adults went to confession that evening because they were doing the plenary indulgence for the Holy Souls on Nov. 2,” said Father McHale.

He said he thinks that, as the standard of living in Ireland has improved, Halloween has become far too commercial and laced with imports from the U.S.

“I never heard the expression ‘trick or treat’ when I was growing up,” he said.

“And I never heard of evil spirits being around on Halloween night; what I did hear related to the souls of the family that needed prayer, because of the strong belief in purgatory and a belief in the power of indulgences to set them free from purgatory. You had that duty to make sure that you prayed for the souls of the dead on Nov. 2.”

NEXT: Pope: If world insists on success, then make life more just, humane