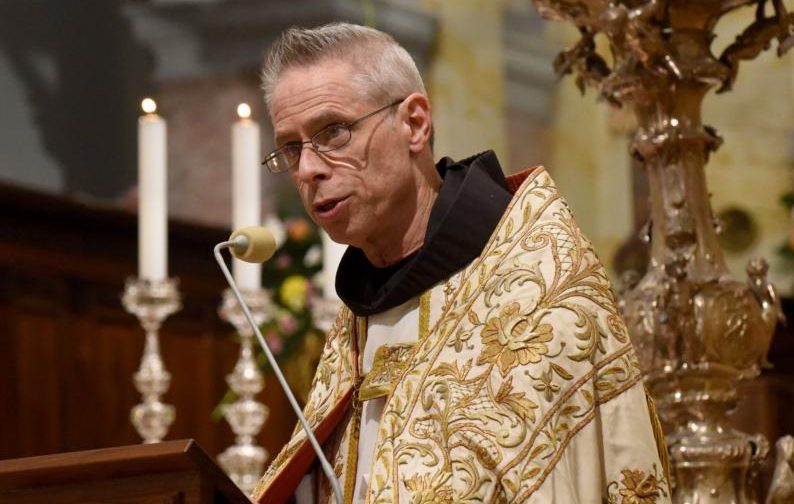 U.S. Franciscan Father Michael Perry, minister general of the order, speaks during the liturgical ceremony for the opening of the celebrations of the anniversary of 800 years of Franciscan presence in the Holy Land Oct. 16 at the Church of St. Saviour in Jerusalem's Old City. (CNS photo/Debbie Hill)

U.S. Franciscan Father Michael Perry, minister general of the order, speaks during the liturgical ceremony for the opening of the celebrations of the anniversary of 800 years of Franciscan presence in the Holy Land Oct. 16 at the Church of St. Saviour in Jerusalem’s Old City. (CNS photo/Debbie Hill)

JERUSALEM (CNS) — Franciscans serving in the Holy Land have had an impact on Christian pilgrims, said Franciscan Father Michael Perry, minister general of the order.

“The Franciscans’ care for pilgrims, their attention to detail, their efforts to demonstrate the love of God, the mercy of God through different religious services and … how they welcome people in hospitality houses, these become elements that people themselves, Christians and others, take back to (their) countries,” said Father Perry.

Father Perry spoke to Catholic News Service in Jerusalem during official celebrations of the 800th anniversary of the presence of the Franciscans in the Holy Land. The celebration included three days of prayer, reflections, music and conference meetings, which discussed the history and archaeology of the Franciscans in the Holy Land. Cardinal Leonardo Sandri, head of the Vatican Congregation for Eastern Churches, was among those who attended.

The service of the Franciscans “should be a call to go beyond division, a call to recognize each other truly as brothers and sisters belonging to the one same family, whether you call it family of God or the one human family,” Father Perry told CNS following the celebrations’ opening ceremony Oct. 16. “I think their service is absolutely essential; that is why in the 14th century, the Holy Father at the time asked the Franciscans to dedicate energy and personnel to care for the holy sites.”

In his missionary service, Father Perry said, he has seen pilgrims from many countries talk of the gratitude they felt for the way the Franciscans welcomed them and guided them, offering them an opportunity to meet Jesus, to meet the living God, giving real witness to their Christian faith.

He said he witnessed one of the strongest examples of the Franciscan dedication both to the local Christians and to the holy sites in Syria, which he visited in April. There, two Franciscan friars remained with 300 Christian families in two villages under the rule of the Islamic State group in order to “guarantee Christ’s presence … and the presence of Eucharist and a presence of church” for the families, he said.

He added that although these friars were not able to cross over into Aleppo to see him, he did see how other Franciscans there were active in organizing the laity to help themselves.

“The Franciscans really serve as a cornerstone for coordinating and implementation and getting the funding in … and also empowering laity to become partners in caring for their own people in Syria, so the laity in Syria, the young people in particular, were involved in this dire service to their own people, and not just to Christians, but to Muslims as well. This was an amazing witness to me,” he said.

Reflecting on the significance of the 800th anniversary, Father Perry said two words came to mind: “inter gentes,” Latin for “among the people.”

“This going among the people, becoming a brother to other people: I think the significance of this event is not simply to look back at 800 years of ‘oh what a wonderful job we have done,’ although in many ways I think the brothers have given up a tremendous witness of faith, hope and love, but I also think the significance of this event is to propel us toward the future,” said Father Perry. “This new perspective … means we have to be open and sensitive to where other people are, because we recognize God’s presence, the Spirit’s presence, already there. We are not there to convert people, we’re there to recognize with them what God is doing.”

The 800th year anniversary is one of celebrating the work that God continues to do in the Holy Land, he said.

“All of us have to reach out, not only to all human beings, but ‘Laudato Si’,’ to reach out to all of creation to safeguard the future of our planet for all of humanity,” Father Perry said, using the title of Pope Francis’ 2015 environmental encyclical. “This is what the holy sites tell me, this is what the place of the burial of Jesus tells me, the cross and the event of the resurrection. I think this is what it tells us as Franciscans. He calls us forward.”