On contraception, church must continue to defend life, cardinal says 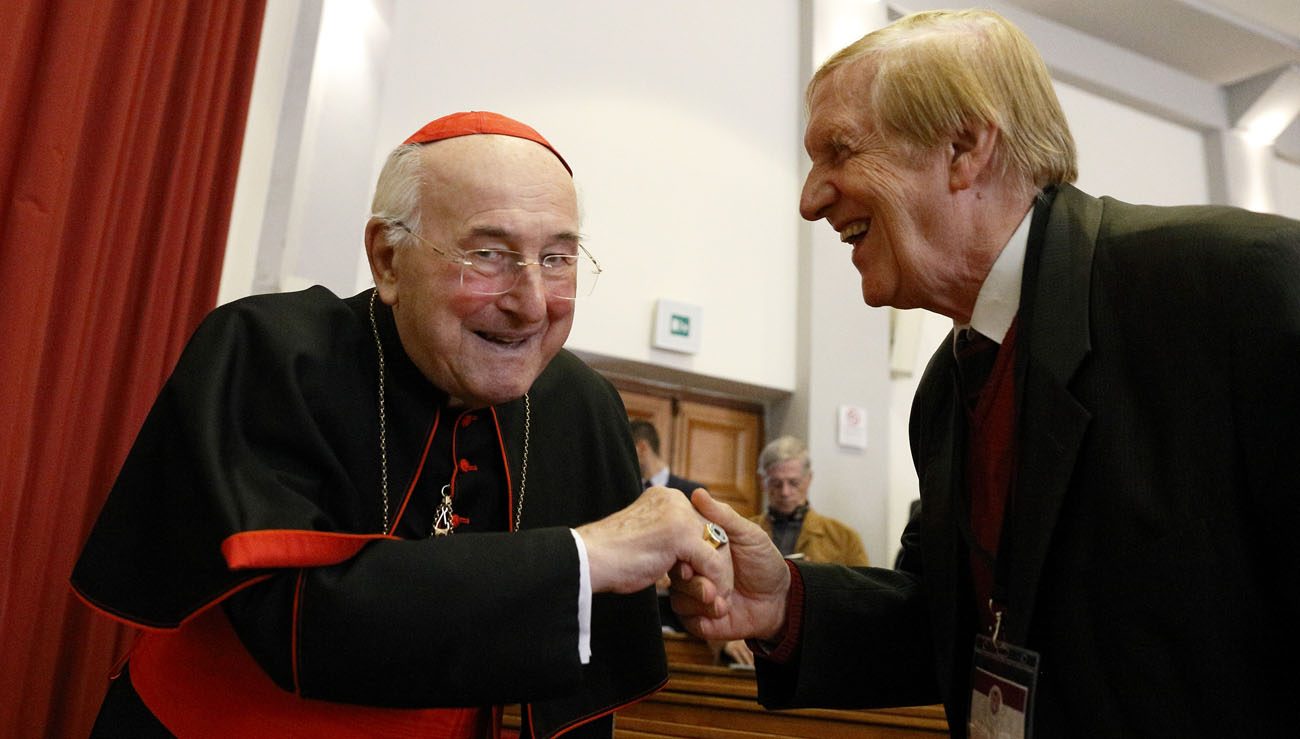 German Cardinal Walter Brandmuller greets Professor Josef Seifert at a conference on Blessed Paul VI's 1968 encyclical, "Humanae Vitae," in Rome Oct. 28. The conference was organized by Voice of the Family, a coalition of pro-life and pro-family groups. (CNS photo/Paul Haring)

ROME (CNS) — The acceptance of artificial contraception by some Christian churches and communities beginning in the 1930s has led “to the monstrosity of what is today known as procreative medicine,” which includes abortion, said German Cardinal Walter Brandmuller.

Inaugurating an Oct. 28 conference anticipating the 50th anniversary of Blessed Paul VI’s encyclical “Humanae Vitae,” Cardinal Brandmuller told participants that in ignoring traditional church teaching men and women today have seated themselves “on the throne of the Creator.”

In “Humanae Vitae,” published in 1968, Pope Paul underlined the responsibility that goes with human sexuality and marriage. While he taught that couples can space the birth of their children for valid reasons, they must use only natural methods of avoiding fertility. Birth control, he said, causes an “artificial separation” of the unitive and procreative aspects of married love.

In his speech at the Rome conference, Cardinal Brandmuller said that after the Second Vatican Council, the church faced significant pressure — including from within its own ranks — to endorse contraception as “morally justifiable” just as the Anglican Church had done at the 1930 Lambeth Conference and the U.S. Federal Council of Churches, the precursor of the National Council of Churches, did in 1961.

Nevertheless, he added, Blessed Paul defended the sanctity of life and brought “temporary closure to a series of doctrinal affirmations on the matter of contraception.”

“Humanae Vitae” proves that ultimately, it is the Holy Spirit that guides the process of “paradosis,” or teaching based on church tradition, and “ensures that the faith of the church develops in the course of time” while remaining faithful to Christ’s teachings, Cardinal Brandmuller said.

He prayed that the document would continue to “irradiate the ‘splendor veritatis’ (‘the splendor of the truth’), capable of illuminating the current darkness of minds and hearts.”

Cardinal Brandmuller, former president of the Pontifical Commission for Historical Sciences, was one of four cardinals who formally asked Pope Francis to clarify his teaching on Communion for the divorced and civilly remarried. When the four prelates did not receive a response, they released the letter — commonly referred to as the “dubia” — to the press.

NEXT: Assisting victims of war is a work of mercy, pope says