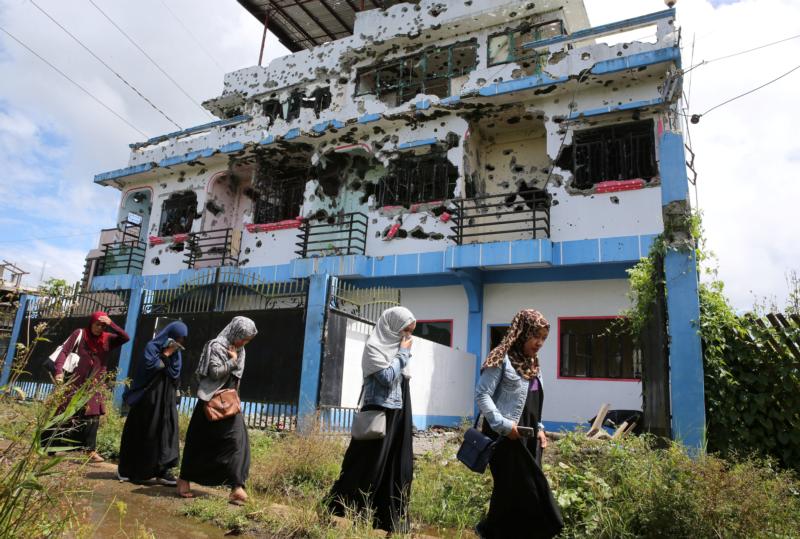 Residents who returned from evacuation centers walk past a bullet-ridden house Oct. 29 believed to have been used by pro-Islamic State militant group leaders in Marawi, Philippines. (CNS photo/Romeo Ranoco, Reuters)

Christian leaders in Philippines have banded together to help rebuild Marawi, a Muslim-majority city in southern Philippines damaged by five months of occupation by terrorists.

The Christian leaders are calling on smaller Christian groups “and even the monks” to pool their strength toward restoring Marawi, said Jing Henderson, communications and partnership development coordinator of the Philippine bishops’ social justice council and Caritas Philippines. The historically peaceful city is located on central Mindanao Island, a restive part of the country, which for decades experienced insurgency from Muslim rebel groups seeking autonomy.

“For example, our expertise is in disaster risk reduction, psychosocial support; others would have expertise in shelter, livelihood,” Henderson told Catholic News Service. “We would like to share these resources so that when we go on the ground, to these affected communities, then we’ll know what to do, when to provide the response and also how to provide it.”

On Oct. 23, five months after Islamic State loyalists began a sustained siege in Marawi, the Philippines declared the war ended. More than 1,100 people — most of them militant fighters — died in the fighting. Nearly all of Marawi’s 200,000 residents fled the city, along with hundreds of thousands of citizens from surrounding areas.

Baptist Bishop Noel Pantoja, head of the Philippine Council of Evangelical Churches, told CNS: “Imagine more than 500,000 people are displaced. So the biggest religious blocks and (nongovernment organizations) are doing their part but … three months ago we came together, all the heads of these organizations and said, ‘What if we put our hands and resources together?’ After the relief operations, there will be rehabilitation.”

Bishop Pantoja said the three church conferences would build temporary shelters, and each would be responsible for at least 100 houses and providing basic necessities, in addition to giving other support. Henderson said residents have played a crucial part, giving input on how they want their neighborhoods to be rebuilt.

Media images of Marawi, a once-thriving city on a lake, show streets lined with what used to be midrise buildings and houses reduced to piles of rubble and twisted metal framework. Several of the city’s mosques lay crumpled with toppled, bullet-riddled minarets and cracked, hole-punched domes.

The Philippine National Defense secretary said in September that rebuilding would cost $1 billion. So far, the three church conferences have put $550,000 — half of it from Caritas Philippines — into their response. Donations from Canada, China, Germany, South Korea and other countries as well as pledges from the U.S. Agency for International Development, the European Union, the World Bank and other entities have started to arrive.

The head of Caritas Philippines, Jesuit Father Edwin Gariguez, said the Catholic aid group is supporting a crisis response program started in August by Marawi Bishop Edwin de la Pena and Redemptorist priests. The goal of the Accompanying Marawi program is to “ensure people’s faith and culture are paid attention to and factored into the rebuilding process of the city.”

Bishop de la Pena told CNS that volunteers — mostly Muslims — are helping with the program, which deals with the psychological toll of war. It provides medical help for physical and mental health problems, peace and reconciliation lessons for children, and promoting peace through dialogue between Muslim and Christian young people.

He expressed concern over what he said was a strong sense of ambivalence among the residents who fled.

“To those who were less affected by the crisis… (the end of the fighting) is a very hopeful sign, they’re optimistic about the future,” said Bishop de la Pena. “But the others… who have no place to go home to because practically their house is destroyed, that would be another trigger for trauma.”

Marc Natan, the Marawi emergency response officer for the National Council of Churches in the Philippines, said it was important to let displaced residents know that Christians supported them in their aspiration for peace and to return to their homes. He said those living far from the conflict zone were happy to go back, but those “in ground zero” who lost their homes would need a lot of support and access to information.

“Christians are in solidarity with our Muslim brothers and sisters so that they will not feel down and forgotten,” he said.

Natan said one community of Maranao, the main Muslim tribe in Marawi, “said we didn’t have to bring relief goods as long as we came around to visit regularly and chat with them at their shelters.”

Natan said the faith groups and government agencies were in the process of assessing how many residents would be returning to their homes and how many would remain away. On Oct. 27, the military said a few residents living far from the decimated city center started to return.

“Whether Muslim or Christian, people of faith really should be at the forefront of the rehabilitation effort because it is only with people who really believe in the God that they recognize that such a difficult task can by carried out,” he said.

NEXT: On contraception, church must continue to defend life, cardinal says