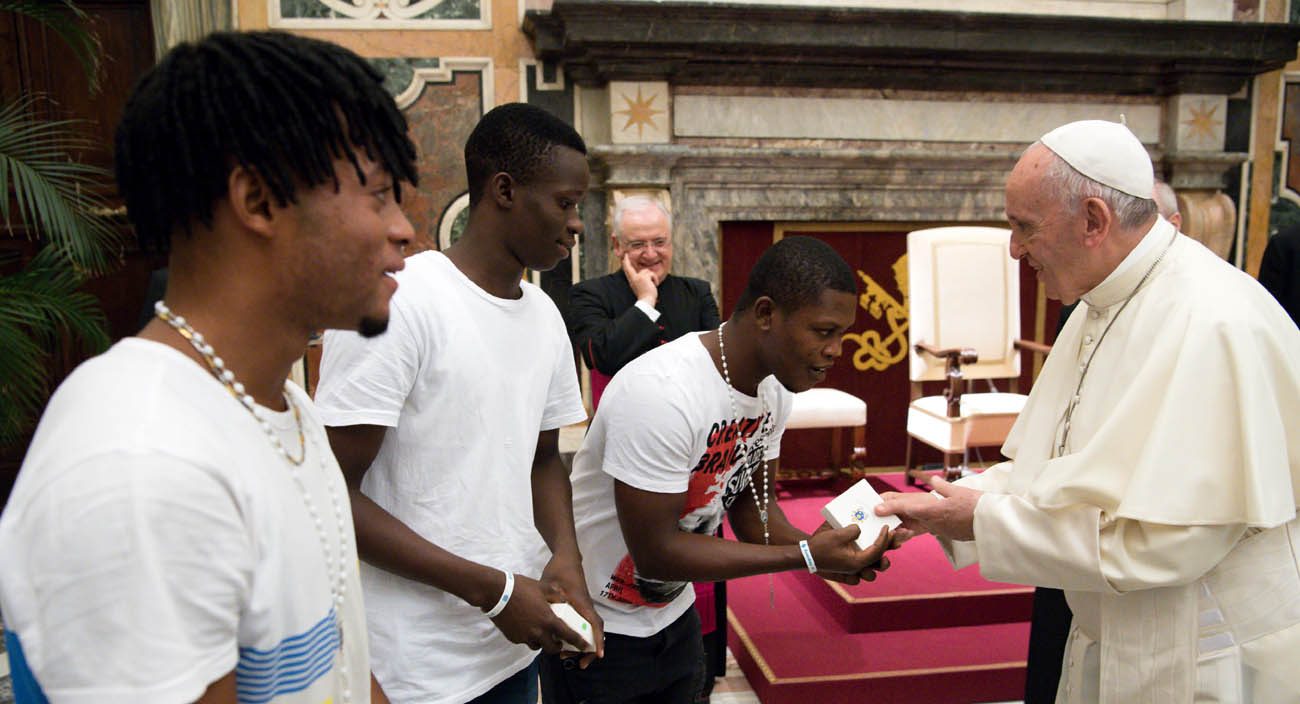 Pope Francis greets young men during an audience with members of the Italian Donation Institute at the Vatican in this Oct. 2, 2017, file photo. Pope Francis has invited Christian and non-Christian young people from around the world to a meeting in preparation for the Synod of Bishops on youth in 2018.. (CNS photo/L'Osservatore Romano)

VATICAN CITY (CNS) — Pope Francis has invited Christian and non-Christian young people from around the world to a meeting in preparation for the Synod of Bishops on youth in 2018.

Before concluding his weekly general audience, the pope said the March 19-24, 2018, pre-synod meeting will be an opportunity for the church to listen to the hopes and concerns of young men and women.

“Through this journey, the church wants to listen to the voices, the sensibilities, the faith as well as the doubts and criticisms of young people. We must listen to young people,” Pope Francis said Oct. 4.

The theme chosen by the pope for the Synod of Bishops, which will be held in October 2018, is: “Young people, faith and vocational discernment.”

The general secretariat of the synod said the initiative “will allow young people to express their expectations and desires as well as their uncertainties and concerns in the complex affairs of today’s world.”

Young people attending the meeting will represent bishops’ conferences, the Eastern Catholic churches, men and women in consecrated life and seminarians preparing for the priesthood, the general secretariat said.

The gathering also will include representatives from other Christian communities and other religions and experts in the fields of education, culture, sports and arts, who “are involved in helping young people discern their choices in life.”

“The pre-synod meeting will enrich the consultation phase, which began with the publication of the preparatory document and its questionnaire, along with the launch of an online website containing a specific questionnaire for young people,” the synod office said in a statement.

Conclusions drawn from the meeting, the general secretariat added, will be given to members of the Synod of Bishops “to encourage their reflection and in-depth study.”

Young people attending the meeting also will take part in the Palm Sunday Mass at the Vatican March 25, coinciding with local celebrations of World Youth Day.

NEXT: Churches in Vietnam, Japan agree to jointly care for migrants