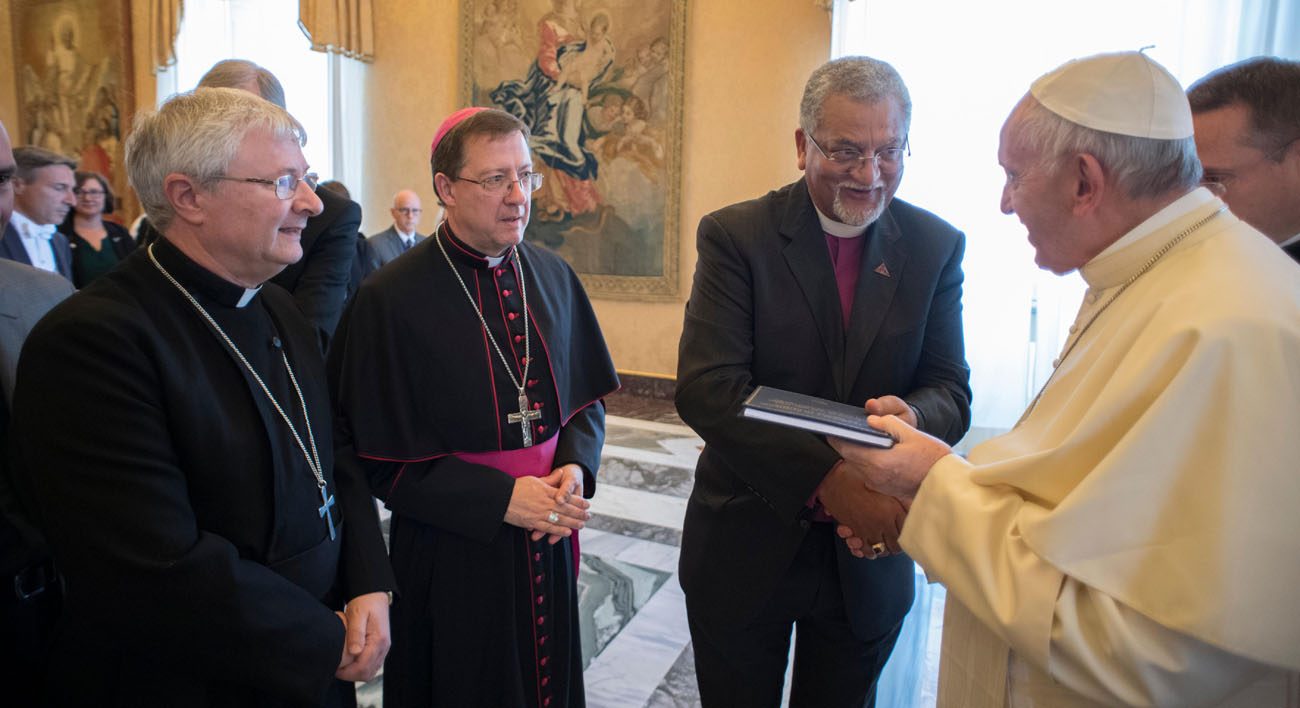 Pope Francis shakes hands with Ivan Abrahams, general secretary of the World Methodist Council, during an audience at the Vatican Oct. 19. Members of the World Methodist Council were in Rome to commemorate the 50th anniversary of the formation of the Joint International Methodist-Catholic Dialogue Commission. (CNS photo/L'Osservatore Romano) See POPE-CATHOLICS-METHODISTS Oct. 19, 2017.

VATICAN CITY (CNS) — Catholics and Methodists can strengthen each other through a shared witness of faith, especially through acts of love toward the poor and the marginalized, Pope Francis said.

The mutual call to holiness shared by both communities “is necessarily a call to communion with others, too,” the pope said Oct. 19.

“When, as Catholics and Methodists, we join in assisting and comforting the weak and the marginalized — those who in the midst of our societies feel distant, foreign and alienated — we are responding to the Lord’s summons,” he said.

The pope met at the Vatican with members of the World Methodist Council who were in Rome to commemorate the 50th anniversary of the formation of the Joint International Methodist-Catholic Dialogue Commission.

Welcoming the delegation members, the pope said that in the Bible, the 50th year is a significant moment for the people of Israel in which liberty is proclaimed throughout the land.

“We are grateful to God because we can say that, in a certain sense, we too have been freed from the slavery of estrangement and mutual suspicion,” he said.

Citing the Second Vatican Council, the pope said that since then, both communities have striven to continue along the path of knowledge and mutual esteem through dialogue that is carried out “in a spirit of honesty and integrity” with “love for the truth, with charity and with humility.”

“We are brothers and sisters who, following a long separation, are happy once more to see and learn about one another, and to move forward with open hearts,” he said.

The pope also recalled the life and example of John Wesley, one of the founders of Methodism, who dedicated his life to helping others “live a holy life.”

By recognizing those who dedicate themselves to reading the Bible and to prayer, he said, Catholics “cannot fail to rejoice” when the work of the Holy Spirit is recognized “in other Christian confessions.”

Like the disciples awaiting the arrival of the Holy Spirit at Pentecost, Catholics and Methodists must “remain together” in prayer and hope so that the Spirit of God may “bring about the miracle of reconciled unity.”

“We have learned to see one another as brothers and sisters in Christ,” Pope Francis said. “Now is the time to prepare ourselves, with humble hope and concrete efforts, for that full recognition that will come about, by God’s grace, when at last we will be able to join one another in the breaking of the bread.”