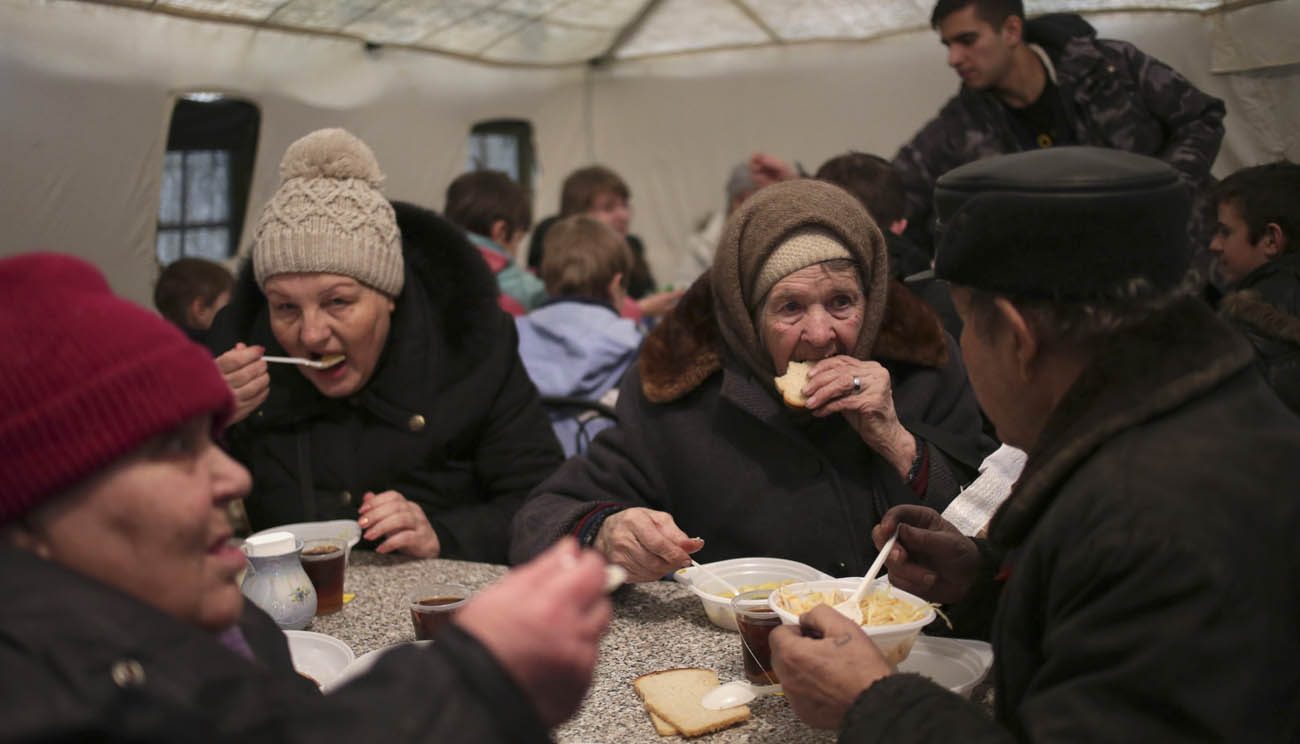 People displaced by fighting eat lunch inside a heated tent at a train station during evacuations in 2015 in the Ukrainian city of Slaviansk. The Catholic bishop responsible for eastern Ukraine has backed calls for the deployment of international peacekeepers and praised "pressure from below" to end the four-year war. (CNS photo/Anastasia Vlasova, EPA)

WARSAW, Poland (CNS) — The Catholic bishop responsible for eastern Ukraine has backed calls for the deployment of international peacekeepers and praised “pressure from below” to end the nearly four-year war.

With the Ukrainian government ready to establish conditions for a peacekeeping force, “there are now good signs this could happen,” said Bishop Stanislav Szyrokoradiuk of Kharkiv-Zaporizhia, whose diocese includes rebel-held Donetsk and Luhansk.

“Although some politicians still hope to use this conflict for their own power interests, pressure for reconciliation is spreading up from below among the people who’ve had enough of it. This is a positive change, and it brings a real chance of peace,” he told Catholic News Service Oct. 18.

Peacekeeping proposals were being debated by European Union and U.N. officials in mid-October to end the conflict between the Ukrainian government and Russia-back separatists.

Bishop Szyrokoradiuk said he has been in continual contact with people on both sides who believe pressure from the U.S. and Western governments would induce Russian President Vladimir Putin to “talk and reach agreements.”

“Those whose decisions led to this war, and who saw it as a way of making dirty money, will naturally stand by policies they’ve staked their reputations on,” Bishop Szyrokoradiuk said. “But people at large are demanding their leaders do something to end this terrible bloodshed. Peace will come sooner or later, from below if not from above.”

Ukrainian church leaders have accused Western governments of ignoring continued suffering in their country, where war has left more than 10,000 dead.

Ukraine’s armed forces have been substantially rebuilt with $857 million in “non-lethal” Western military aid. Gen. Viktor Muzhenko, chief of the military’s general staff, predicted in mid-October he could recapture Donetsk and Luhansk from the separatists with defensive weaponry requested from the U.S., but only at a heavy cost in lives.

Bishop Szyrokoradiuk said his church’s Caritas-Spes charity was helping needy Ukrainians on both sides of the conflict.

However, he added, more than 100,000 displaced people, a fifth of them children, were living in industrial containers, abandoned barracks and railway sheds in Kharkiv alone as winter approached. Effective humanitarian aid would be essential to any peace process, he said.

“Ukraine cannot stand alone. It needs support, and we’re grateful to people of goodwill in Europe and the U.S. who are engaging and showing solidarity with us,” the bishop said.

“The feeling we’re not abandoned has been very important for unifying Ukraine during this war. Although opinion was once divided between pro-Russian and pro-Western groups, no one now doubts our salvation lies in moving closer to the European Union,” he said.