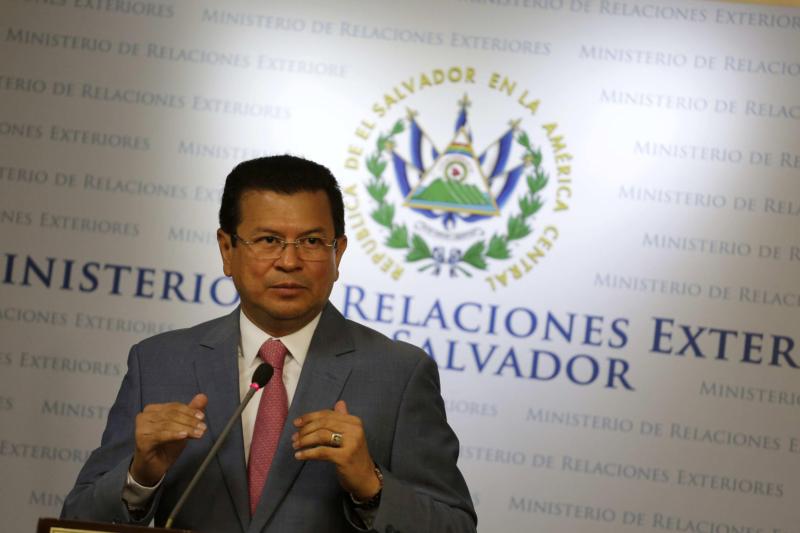 Hugo Martinez, chancellor of El Salvador, speaks at a news conference in San Salvador Nov. 6, the same day the U.S. Department of Homeland Securitysaid it would end Temporary Protected Status for 2,500 Nicaraguans. Martinez urged the Trump administration to keep TPS in place for 190,000 Salvadorans in the U.S. protected by the program. The administration must decide TPS status for them by Jan. 8. (CNS photo/Rodrigo Sura, EPA)

UPDATED – WASHINGTON (CNS) — Immigration advocates decried a Department of Homeland Security decision to end Temporary Protected Status for 2,500 Nicaraguans who have been living in the United States for nearly 20 years.

They also lamented during a call with reporters Nov. 7 that Elaine Duke, acting secretary of Homeland Security, put off a decision on TPS for 57,000 Hondurans for six months, saying more time was needed to determine if they could remain in the U.S. because of adverse social and economic conditions in their homeland.

Randolph P. McGrorty, executive director of Catholic Legal Services in the Archdiocese of Miami, said U.S. law is meant to be implemented “with a certain degree of kindness and compassion,” and that sending people to countries that are ill-prepared to welcome them would do far more harm than good.

He called on policymakers in Congress and the administration of President Donald Trump to recognize that Nicaraguans, Hondurans and other TPS holders are vibrant members of their parishes, neighborhoods and workplaces.

“I think they deserve to have some sense of belonging,” he said.

Rather than ending TPS, the advocates from an array of agencies said, it was time for Congress to develop a legislative plan to allow Nicaraguans, Hondurans and others to remain in the U.S. permanently in the name of family unity and because they play vital roles in building American society.

They called for TPS to be extended at 18-month intervals, as the current law requires, until Congress hammers out a legal fix.

The TPS designation is for those who have come to the U.S. from certain countries because of a natural disaster, continuing armed conflict, criminal violence or other extraordinary conditions. It authorizes employment and protection from deportation for about 320,000 people from 10 countries.

On Nov. 6, Duke discontinued TPS for Nicaraguans, delaying the effective date for them to leave the country until Jan. 5, 2019. Duke also announced the automatic extension for six months of TPS for Hondurans, explaining that further study was needed on conditions in the northern Central American country. She set a new expiration date of July 5.

Royce Murray, policy director at the American Immigration Council, said that Duke’s decision indicates that the administration is “struggling with the seriousness of the conditions and complicated situation” in Central America’s so-called Northern Triangle, which includes Honduras, El Salvador and Guatemala.

The advocates also pointed to decisions due in several weeks from homeland security on TPS for people from El Salvador and Haiti, calling on Duke to extend protections without delay.

Belinda Osario, a native of Honduras who works as a housekeeper at Walt Disney World in Orlando, Florida, told reporters that living her life in six-month increments waiting for a decision on TPS was “like a torture.”

“They’re putting us in limbo. That’s unfair,” she said of Homeland Security officials.

Osario added that should would resist returning to her homeland because she had made a life with her family in the U.S. She said she did not want her 14-year-old son to be subject to gang recruitment and threats of violence if he were suddenly forced to live in a country that would be foreign to him.

“I’m not leaving. No matter what, I’m not leaving” said Osario, who has been in the U.S. for 26 years, the last 19 as a TPS holder. “My hope is they change the legislation to make this a permanent thing for all the TPS recipients.”

Some advocates on the call expressed concern that ending TPS would pose a threat to national security because the countries in question were ill-prepared to accept tens of thousands of returnees.

Governments already stretched to adequately protect their citizens are unlikely to be able to assist people in their return, possibly leading to destabilization that could spill across borders, said Oscar Chacon, executive director of Alianza Americas.

“Congress has an opportunity to fix something,” he said. “We need to recognize that these communities have become a permanent part of our community.”

In a Nov. 8 statement, the bishop said it was “the right thing to do” while officials studied the situation in the country.

He cited an October report issued by the bishops’ Office of Migration and Refugee Services that described the difficult conditions that continue to plague the beleaguered country including ongoing violence and security threats to citizens, a still-forming protection system, deep poverty and environmental degradation.

“TPS recipients have deep ties to our communities, parishes and country,” the bishop said. “They are business owners, successful professionals, homeowners, parents of U.S. citizens and most importantly children of God. We must find a solution for these individuals and their families, and we stand ready to support Congress in its effort to do so.”

A day later, Bishop Vasquez said that conditions in Haiti are improving, but not to the extent that the country can safely accept the return of an estimated 50,000 Haitian nationals who receive TPS.

His comment came as the bishops’ Office of Migration and Refugee Services released a report, “Haiti’s Ongoing Road to Recovery: The Necessity of an Extension of Temporary Protected Status.”

The report details the findings of a delegation to Haiti Sept. 4-7 led by Miami Archbishop Thomas G. Wenski. He was joined by Bishop Launay Saturne of Jacmel, Haiti; and representatives of Migration and Refugee Services and the Catholic Legal Immigration Network Inc., or CLINIC.

The report comes as Haitians face the termination of their TPS designation Jan. 22. The Trump administration must determine by Nov. 23 whether to extend or formally terminate the status.

Earlier, Duke’s decisions on Nicaraguans and Hondurans drew criticism from CLINIC. Jean Atkinson, the organization’s executive director, said in a statement Nov. 7 that the decision on Nicaraguans “is a cruel and ultimately short-sighted action.”

She said the lives of thousands of Nicaraguan families who “help make the United States vibrant” would be disrupted and that both the U.S. and Nicaragua would be harmed.

Bishop Kevin W. Vann of Orange, California, a member of CLINIC’s board of directors, added in the statement that American society is responsible for protecting all members of the human family and that “means TPS should not be revoked until safe return and reintegration can be assured.”