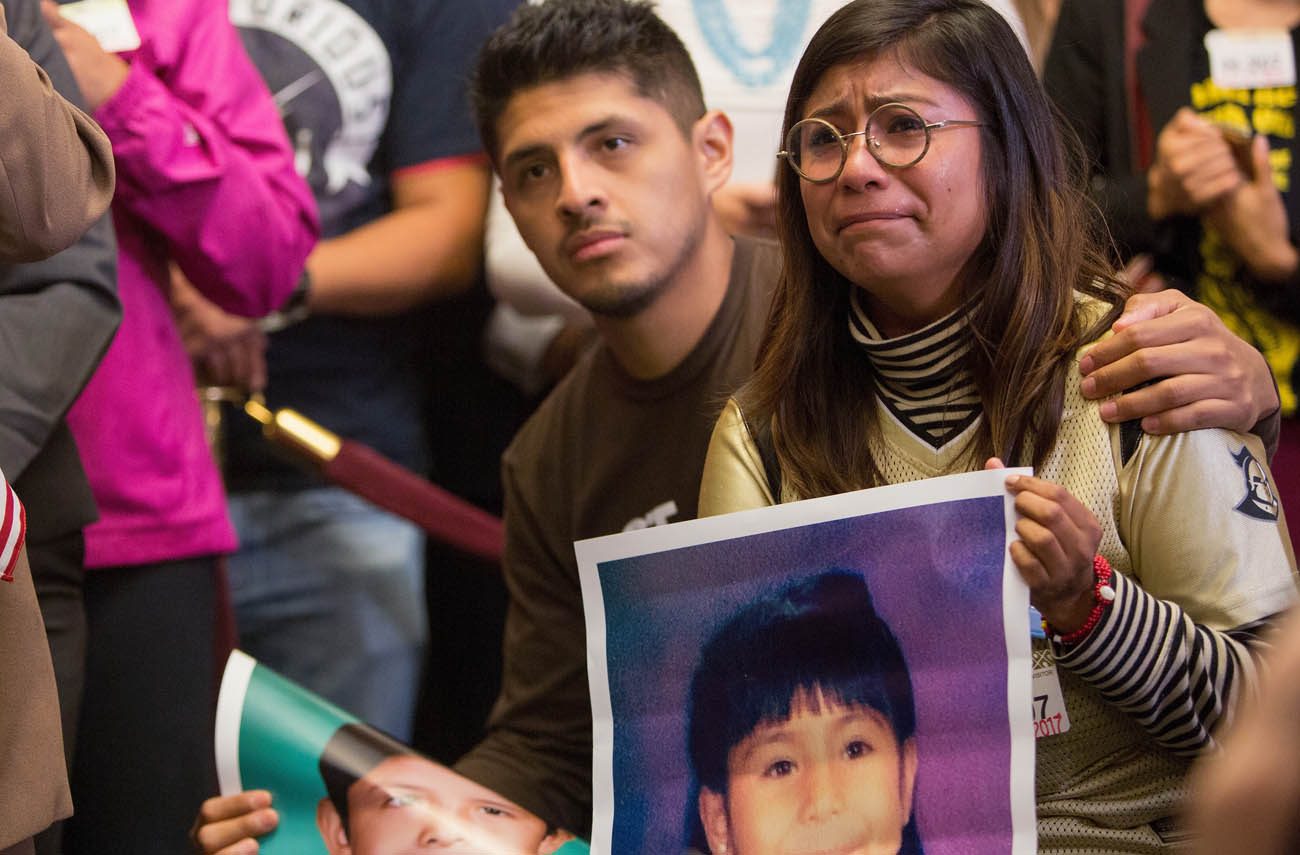 Dreamers Jario Reyes, 25 of Rogers, Ark., and Karen Caudillo, 21 of Orlando, Fla., attend a late September news conference on the Deferred Action for Childhood Arrivals program on Capitol Hill in Washington. During an Oct. 25 Dreamers Symposium at Trinity Washington University, some of the more than 100 Dreamers who attend the Catholic university shared their stories of growing up in the United States. (CNS photo/Tasos Katopodis, EPA)

WASHINGTON (CNS) — During a Dreamers Symposium at Trinity Washington University, some of the more than 100 Dreamers attending the school shared their stories of growing up as immigrants living in the United States without documents.

The school’s president, Pat McGuire, said the Dreamers who attend Trinity “are among our most accomplished students,” excelling in sports, leadership, academics, integrity, and service to others.

The student-led “Dreamer Alliance” worked with faculty to create the daylong symposium to educate the school community about an issue affecting so many of its members.

“It was important after Trump rescinded DACA to show in a tangible, concrete way that Trinity stands for justice,” McGuire said at the Oct. 24 event. “It is important when a community has a group within it experiencing so much stress that we not just comfort them, but also talk (about) action steps.”

“Dreamers” are those benefiting from the Deferred Action for Childhood Arrivals program, known as DACA. Put in place by then-President Barack Obama in 2012, DACA was terminated by President Donald Trump in September. He urged Congress to pass a bill to keep it in place, and immigration advocates are urging lawmakers to do so by approving the Development, Relief and Education for Alien Minors Act, or DREAM Act.

“We want to educate you about what we are going through not so you can feel bad for us, but so you can continue to fight with us,” said Daniela Zelaya, who immigrated to the United States from El Salvador at age 3.

Zelaya and about 800,000 other young immigrants across the country now face an uncertain future. The DACA program gave them temporary protection from deportation and provided them with opportunities to do things like get a driver’s license, attend college and find employment.

Until DACA was passed, these young people had to live in the shadows, often hiding their immigration status from their friends because their parents had taught them not to talk about it.

“You put yourself in a cage because you can’t do the things that you want to do,” such as getting a license or a bank account, said Silvia Medina-Balcazar, who came to the United States from Bolivia when she was 9.

Medina-Balcazar said growing up she didn’t know anybody in the same situation as her, and going to Trinity has allowed her to meet people like her.

“We have all gone through different situations, but at the end of the day we can all relate, because we know what it is like to not be able to reach for something we want (even) if it is right there,” she said.

DACA changed these young immigrants’ lives, they said, because they were able to come out of the shadows, be honest about their status and finally be able to do the things that their peers were doing.

“It finally meant that I could do the little things,” said Medina-Balcazar, who added that she now sometimes catches herself taking those things for granted, like being able to drive to the corner store and show her ID. When she does, she stops and reminds herself that the opportunity isn’t something she has always had, and “there are other people who aren’t able to do this,” she said.

It was difficult for many of them to afford to attend college, since many states do not allow undocumented students to receive in-state tuition, and they cannot receive federal aid.

“Throughout all of this I’ve always tried to stay positive, because not only am I my parents’ rock, but I also have three younger siblings that are watching my every move,” said Medina-Balcazar. “They are my inspiration. Everything I do, I do for them.”

Speakers at the symposium included Rep. Nancy Pelosi, D-California, the House minority leader who is a graduate of Trinity. She told the students at the symposium that she thought a clean DREAM Act had a chance and encouraged them all to ask Congress to support it.

She also commended the Dreamers on the dignity with which they have already campaigned. It is the way they have conducted themselves, she said, that has drawn the support of the American people — a majority of whom support enacting legislation to make DACA more permanent. She said the way that DACA recipients made their case to Congress was “a model of advocacy for the rest of the country.”

“The ball is in the court of Congress, and Congress must be reflective of the public sentiment,” Pelosi said.

Trinity is in partnership with TheDream.US scholarship, which provides scholarships for DACA recipients to attend one of their partnering schools.

In a morning panel, Christian Penichet-Paul, policy and advocacy associate for the National Immigration Forum, and Greisa Martinez Rosas, advocacy director for United We Dream, discussed the legislative proposals that would make DACA more permanent, allowing the Dreamers to remain in the country and get on a path to citizenship.

The DREAM Act, which Penichet-Paul said is the most bipartisan of the bills, would allow people to apply for conditional permanent resident status if they arrived in the United States at least four years before the enactment of the bill at age 17 or younger, and have been continuously in the country since then.

To qualify, they would need to undergo background checks to make sure they have not been convicted of a crime with an imprisonment of more than a year. They also would need to prove that they had been accepted to an institute of higher education, have graduated high school, or are currently enrolled in a secondary school or GED program. Anyone with DACA would immediately be granted conditional permanent resident status.