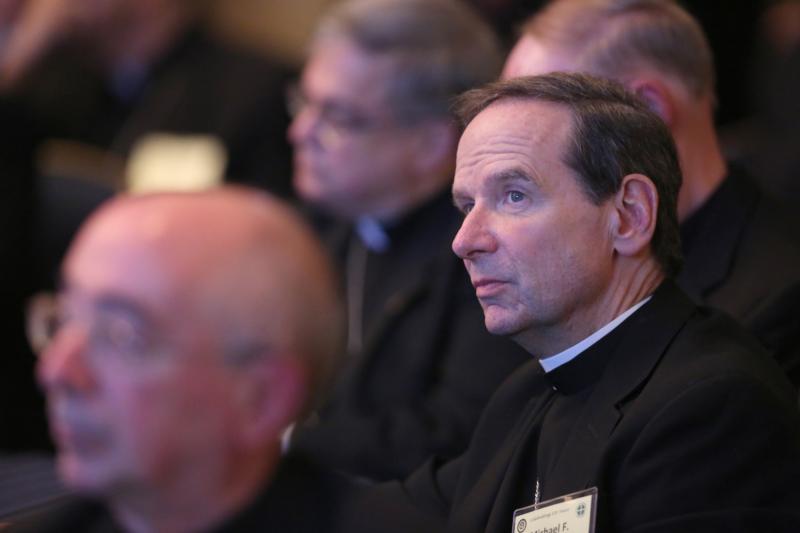 Bishop Michael F. Burbidge of Arlington, Va., right, watches a video during a Nov. 12 presentation in Baltimore on the centenary of the U.S. Conference of Catholic Bishops. The celebration was held the day before the bishops’ fall general assembly opened. (CNS photo/Bob Roller)

BALTIMORE (CNS) — Four U.S. bishops and one archbishop, all graduates of St. Charles Borromeo Seminary, were named the new chairmen of several committees of the U.S. Conference of Catholic Bishops in voting by all the bishops Nov. 14 during their fall assembly.

Archbishop Allen H. Vigneron of Detroit will be the next secretary of the U.S.C.C.B., taking office next November. The bishops voted 96-88 to elect Archbishop Vigneron.

He will succeed New Orleans Archbishop Gregory M. Aymond, who is starting his third and final year of his three-year term.

The Detroit prelate will serve one year as secretary-elect and then start a three-year term in office at the conclusion of the 2018 fall general assembly.

Votes also were cast for a new chairman of the bishops’ Committee for Religious Liberty and chairmen-elect for the committees on Communications, Cultural Diversity in the Church, Doctrine, National Collections and Pro-Life Activities.

Archbishop Joseph E. Kurtz of Louisville, Kentucky (who is a 1972 graduate of St. Charles Seminary and ordained for Allentown), was elected over Archbishop Jerome E. Listecki of Milwaukee as chairman of the Committee on Religious Liberty by a 113-86 vote. He was to assume his duties at the conclusion of the assembly.

At their spring meeting in June, the bishops voted to make what was an ad hoc religious liberty body a permanent standing committee. Baltimore Archbishop William E. Lori served as chairman of the committee since its creation in 2011.

Bishops also voted for chairmen-elect of five committees. Those elected will serve for one year before beginning three-year terms at the conclusion of the bishops’ 2018 fall general assembly.

Not elected were Bishop Jaime Soto of Sacramento, California, and Auxiliary Bishop Oscar A. Solis of Salt Lake City.

NEXT: Bishops voice support of migrants, worries over ‘poisoning rhetoric’