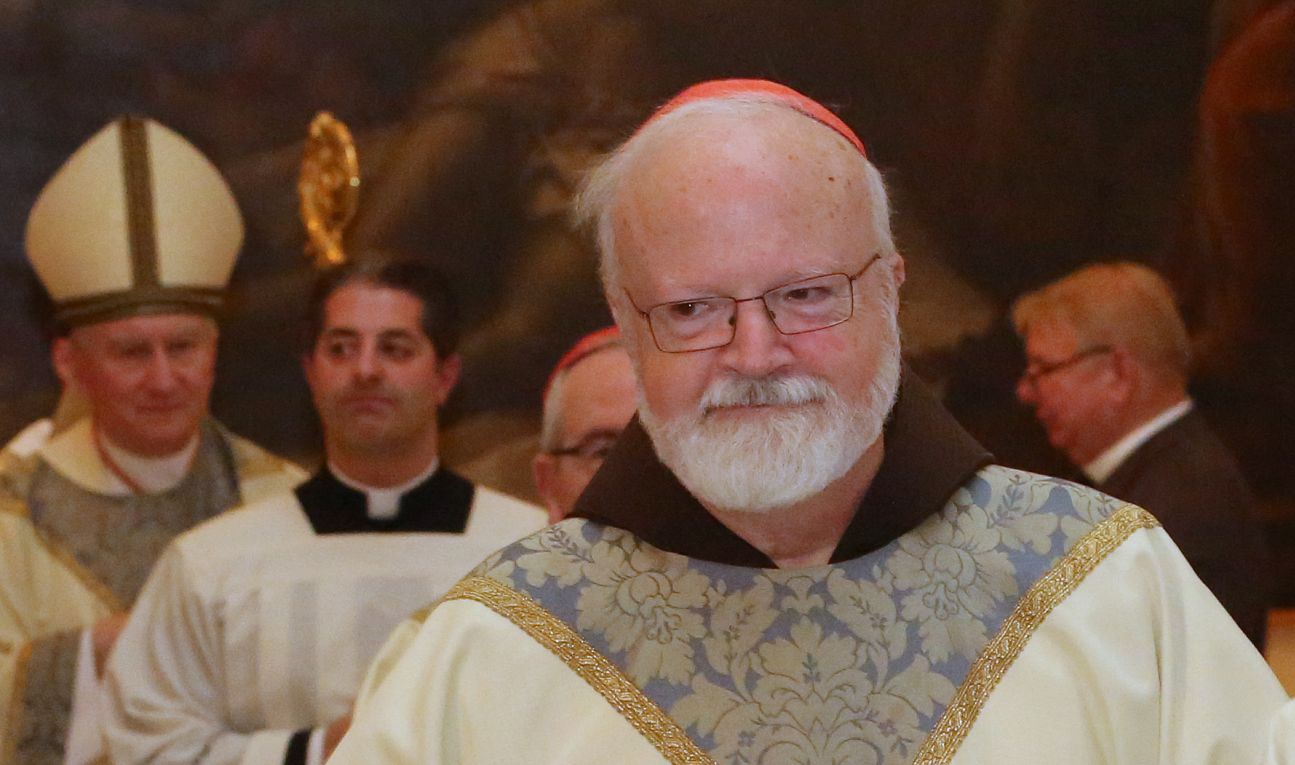 Boston Cardinal Sean P. O'Malley smiles after concelebrating Mass Nov. 12 at the Basilica of the National Shrine of the Assumption of the Blessed Virgin Mary in Baltimore on the eve of the fall general assembly of the U.S. Conference of Catholic Bishops. (CNS photo/Bob Roller)

BALTIMORE (CNS) — The longest and most passionate discussion on the first day of the fall assembly of the U.S. Conference of Catholic Bishops Nov. 13 focused on immigrants, on how to help them but also how to drive home the point that they, too, are our brothers and sisters and should not be demonized.

During a discussion period after a presentation from a working group on immigration issues, Boston Cardinal Sean P. O’Malley spoke to the bishops about a visit he made over the weekend to a Washington parish where he had served as a young priest.

On Nov. 11, he met with young adults at the Shrine of the Sacred Heart who shared their stories of migration, but also shared with the cardinal how they had benefited from the Deferred Action for Childhood Arrivals program, or DACA, which is now in peril.

“It was very moving to listen to these young people,” Cardinal O’Malley said.

A young woman told him of how she crossed the desert when she was 10 years old and how terrifying it was. Another told him it took years to see his parents, whom he hadn’t seen since birth because they had left their home country seeking a better economic future for the family.

“Another young man said, ‘With DACA, I became a person in society, I could get a driver’s license, travel on the airplane, register in school, have a bank account.’ … Some of them were here because their fathers had been killed in the violence in El Salvador,” the cardinal said.

It was encouraging to hear their stories of “how positive their experience of the church has been,” the help they have received from the parish and from other church organizations, the cardinal said. He urged the bishops to help them.

Bishop Joe S. Vasquez of Austin, Texas, and chairman of the USCCB Committee on Migration, and Los Angeles Archbishop Jose H. Gomez talked to the group about their efforts to help young adults, refugees, including some seeking refuge from religious persecution, as well as those who benefit from Temporary Protected Status, in an increasingly difficult political climate.

“We have vigorously opposed recent administrative decisions regarding immigration and refugees,” said Bishop Vasquez. “Our teachings compel us to do so.”

The country “desperately” needs comprehensive immigration reform, he said, and helping migrants and refugees and anyone else who might need help is “who we are as Catholic leaders,” he said.

“We need a path to legalization and citizenship for the millions of our unauthorized brothers and sisters who are law-abiding, tax-paying and contributing to our society,” Bishop Vasquez said to applause from the room.

“We also know our country has the right and responsibility to regulate our borders and enforce our laws. We’re ready to work with all,” he said.

But seeking the deportation of those who have been in the country for many years, “whose children are our children, who work alongside us and pay taxes, and respect the same laws we respect,” does not serve the common good, Bishop Vasquez said.

“We all need to come together and define good, just and right solutions,” he added.

The bishops said they will issue a statement calling for comprehensive immigration reform.

Cardinal Blase J. Cupich of Chicago said that along with advocacy work, it’s important that the bishops also think about how to deal “the poisoning rhetoric” in the country that degrades immigrants and demonizes them and which some church members embrace.

“We also have to have a call to conversion of our people because there’s something wrong when they begin to buy into that poisoning rhetoric that gives a very skewed view” of immigrants and refugees, he said. “There’s something wrong in our churches, where the Gospel is proclaimed, and yet people leave our worship services, our Masses on weekends, with that rhetoric still echoing in their hearts.”

Bishop Vasquez said it is important for bishops to use their role as teachers and tell Catholics about the church’s social teachings on immigration and encourage those who may not have encounters with immigrants to get to know them.

Archbishop Thomas G. Wenski of Miami said that as pastors, they can comment on the common good in the light of Catholic social teaching on the dignity of the human person. Immigrants are not problems, he said, they’re strangers, yes, but strangers who should be seen and treated as brothers and sisters and who make the country better even though others may say otherwise.