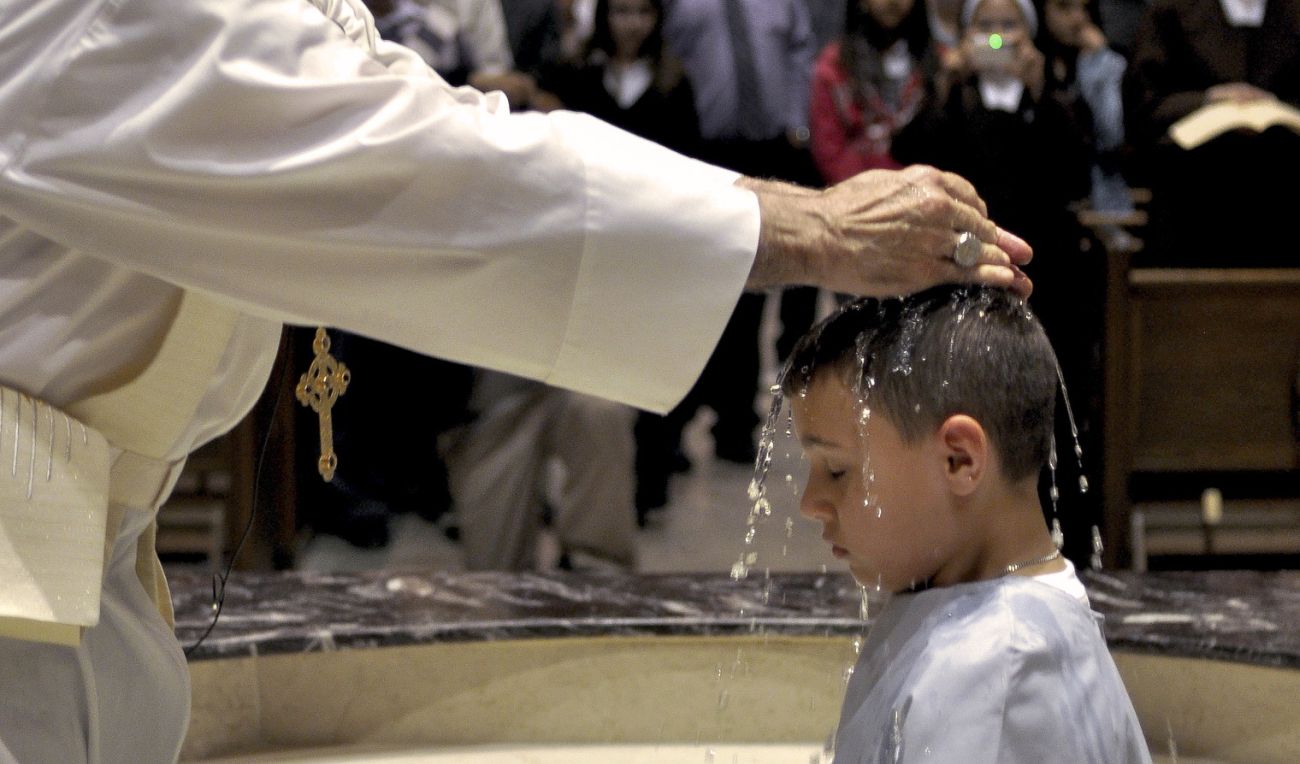 Bishop Dale J. Melczek baptizes a boy during the Easter Vigil in 2011 at Holy Angels Church in Gary, Ind. The U.S. bishops approved the use of a new translation of the baptismal rite for the first time in 40 years Nov. 14 during their annual fall assembly in Baltimore. (CNS/Michael McArdle, Northwest Indiana Catholic) \

BALTIMORE (CNS) – During their annual fall assembly Nov. 13-14 in Baltimore, the U.S. bishops dealt with pressing issues of the day, such as racism and immigration reform, but they also paid close attention to the words used during children’s baptisms.

The day after they discussed it, the bishops Nov. 14 approved the use of a new translation in the baptismal rite for the first time in 40 years.

In discussing the topic, the bishops made it clear it was not something they took lightly.

“We need to think about these things. It’s not just the pope or the Holy See that protects revelations, but us,” said Detroit Archbishop Allen H. Vigneron.

Retired Bishop Donald W. Trautman of Erie, Pennsylvania, questioned the need for the change and the expense of doing it, saying the changes were relatively minor and made the text more cumbersome.

In response, Atlanta Archbishop Wilton D. Gregory, chair of the U.S. Conference of Catholic Bishops’ Committee on Divine Worship, who brought the topic up for discussion and vote, agreed the changes were minor. But he said they were a response to the Vatican’s call that they were part of something bigger and addressed the Vatican’s request to translate liturgical texts into modern languages.

Two hundred bishops voted in favor of approving a translation of the Order of Baptism of Children for use in U.S. dioceses from the ICEL Gray Book translation. ICEL stands for the International Committee on English in the Liturgy.

The bishops’ conferences of 11 English-dominant countries make up the ICEL’s membership. Since 1963, this committee has been the resource to prepare translations of Latin liturgical texts.

Twenty-three bishops voted against the translation and three abstained. The vote required affirmation by two-thirds of the Latin Church members and is subject to confirmation by the Vatican’s Congregation for Divine Worship and the Sacraments.

This discussion came some weeks after an apostolic letter about translating liturgical texts given “motu proprio” (on his own initiative) by Pope Francis.

The letter, “Magnum Principium” (“The Great Principle”), called for a simpler process of translating liturgical texts. It was published Sept. 9 and went into effect Oct. 1.

The text the bishops want to use for children’s baptisms also reflects principles of “Liturgiam Authenticam” (“The Authentic Liturgy”), a 2001 document on liturgical translations from the Vatican’s Congregation for Divine Worship and the Sacraments.

NEXT: Priest seen as ‘Catholic Martin Luther King’ who gave ‘all to his faith’