BALTIMORE (CNS) — Almost two months after the devastating winds and rains of Hurricane Maria pummeled the island of Puerto Rico, there is still no clear path to recovery.

Although some power and phone service have been restored and relief supplies are slowly filtering in, the cleanup and rebuilding is only just beginning.

The archbishop, who attended the U.S. bishops’ fall assembly in Baltimore, is acutely aware of the storm’s initial and ongoing impact. Since Maria, he has visited 57 parishes in his archdiocese and has 100 more to go. Every parish in this archdiocese in the northeast corner of the island was impacted by the hurricane from minimal to extensive damage.

And as Puerto Rico’s Catholics find their way through the wreckage and mud-soaked parish buildings and roofless homes while coping with minimal electricity, food and water, he said they have not lost their faith. For many, their faith has only deepened. 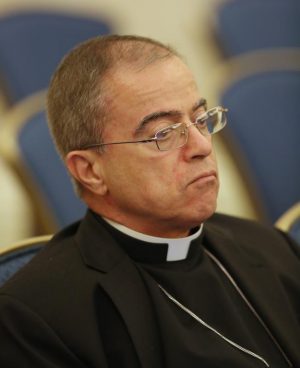 “Tragedies and adversities have a way of reinforcing our faith and our sense of spirituality, our dependency on God,” which also goes hand in hand with an “intensified spirit of sharing, generosity and solidarity,” he said.

Archbishop Gonzalez, who lived in Puerto Rico as a child and has led the San Juan Archdiocese for 18 years, said he has noticed at some recent Masses that “the choirs continue to sing the hymns they were singing before but with much more vigor and joy.”

“We are in a sense being rejuvenated,” he told Catholic News Service Nov. 13.

He isn’t surprised by the way people are taking care of each other or as he put it — “the enormous amount of sharing that took place and is still taking place” — as people make meals for neighbors, for example, on gas-powered stoves.

He also has experienced this care firsthand in the calls and emails — once they could come through — from other bishops, along with donations and offers of rebuilding help. At the Baltimore meeting, he said a number of bishops told him: “We’re with you and we’ll be sending help.”

Archbishop Gonzalez and Bishop Herbert A. Bevard of St. Thomas, U.S. Virgin Islands — another region hard hit by Hurricane Maria — were both invited as observers to the bishops’ fall meeting and were introduced by Cardinal Daniel N. DiNardo of Galveston-Houston, president of the U.S. Conference of Catholic Bishops.

Puerto Rico, a U.S. commonwealth, has its own Catholic bishops’ conference and participates in the Latin American bishops’ council, known as CELAM.

During the Baltimore gathering, Dominican Sister Donna Markham, president of Catholic Charities USA, told the bishops that the relief agency had given $2 million in early November to Father Enrique Camacho, director of Caritas Puerto Rico, the Catholic Charities affiliate on the island, and she had just presented Bishop Bevard with $1 million for recovery needs.

The funding has been distributed for emergency housing, food, water, cleaning supplies, clothing, bedding, diapers and other baby needs. The agency also has deployed 150 case managers in storm-battered areas to assist people in navigating the unfamiliar task of seeking assistance.

In an unscheduled discussion about recent natural disasters at the close of the bishops’ public session Nov. 14, Bishop Frank J. Dewane of Venice, Florida, chair the U.S. bishop’s Committee on Domestic Justice and Human Development, urged fellow bishops to think of what more could be done to help Puerto Rico. He wonders if there had been donor fatigue since the hurricane followed other natural disasters.

“We should, as a body, think of how we can help. They are destroyed,” he said.

Archbishop Gonzalez doesn’t deny the island can use monetary help, but he said it also needs prayers.

“We believe in the immense power and efficacy of prayers. We have felt it. I have felt the impact of so many prayers. They make a difference, ” he said. “Today we’re still in an emergency mode. We need water, food, clothing, basic necessities of life. In the long term, we’ll need assistance rebuilding homes, churches, schools, roofs.”

PREVIOUS: National confab was a big hit; energy to evangelize must be seized

NEXT: Bishops approve revised translation of baptismal rite for children