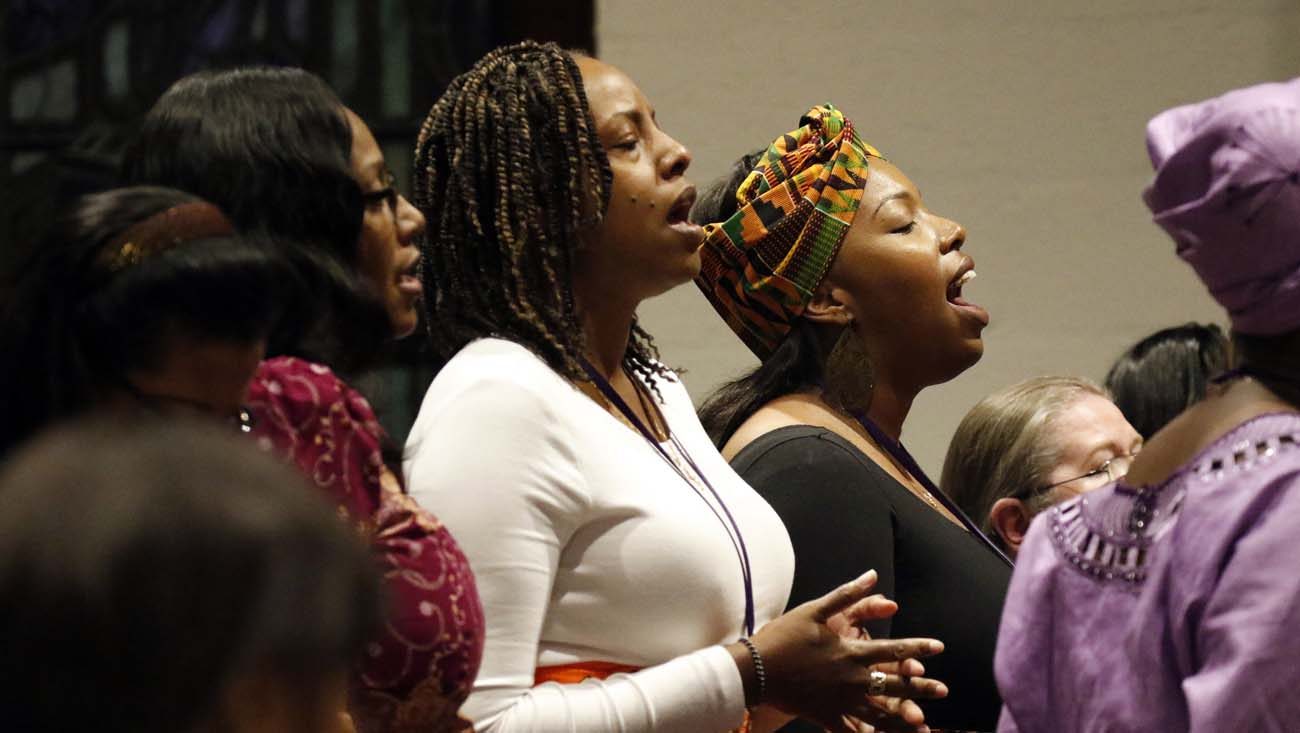 Members of the Sister Thea Bowman Diocesan Choir sing during a healing Mass Nov. 12 at St. Martha Church in Uniondale, N.Y. The liturgy, celebrated in observance of National Black Catholic History Month, was sponsored by the Office of Multicultural Diversity of the Diocese of Rockville Centre, N.Y. Worshippers had an opportunity to venerate a first-class relic of St. Padre Pio after the Mass. (CNS photo/Gregory A. Shemitz)

She said that during the November celebration, she looks for ways to share how black Catholics have helped make the church what it is today.

The principal, a member of the Sisters of St. Mary of Namur of Buffalo, New York, is from Kingstree and noted that as the only black religious sister from the state of South Carolina, she is a living example of what the month is all about.

Black Catholic History Month was initiated in 1990 by the National Black Catholic Clergy Caucus of the United States. November was chosen because it holds two commemorative dates for prominent African Catholics: St. Augustine of Hippo, whose birthday is Nov. 13; and St. Martin de Porres, whose feast day is Nov. 3.

Every year St. Martin de Porres School kicks off the month by celebrating the feast of the school’s patron. The well-known saint is followed by lessons on lesser known figures, such as the three African popes — Sts. Victor I, Melchiades and Gelasius I — who led the early church through much turmoil.

Several dozen saints fill the pages of history, from Monica and Augustine of Hippo to Perpetua and Felicitas.

There also are many new names of black Catholic church figures up for canonization, including religious from the Oblate Sisters of Providence and Franciscan Handmaids of the Most Pure Heart of Mary. Both of these orders have served in the Diocese of Charleston.

Sister Roberta said the schoolteachers evangelize while they teach, making it fun through trivia, spelling bees, bingo and more.

“I get so excited,” she told The Catholic Miscellany, newspaper of the statewide Diocese of Charleston. “It’s a big celebration for us. We try to open people to the richness of the history.”

The Charleston Diocesan Office of Ethnic Ministries offers the following ideas for celebrating the month:

— Read “The History of Black Catholics in the United States” by Benedictine Father Cyprian Davis, who was known as the top chronicler of black Catholic history; “Oblate Sisters of Providence: A Pictorial History” by Sharon C. Knecht; and/or “Father Augustus Tolton: The First Recognized Black Catholic Priest in America” by Corinna Laughlin and Maria Laughlin.

— Talk about “What We Have Seen and Heard: A Reflection and Dialogue on Peace,” a pastoral letter written by Bishop Edward K. Braxton of Belleville, Illinois.

— Show the movie “Bakhita: From Slave to Saint,” about St. Josephine Bakhita, who was kidnapped at age 6 by Arab slave traders. Treated brutally, she was sold and resold five times. Sold to an Italian diplomat when she was still a teen, she met the Canossian Sisters. She was baptized in 1890, was freed and professed vows in the order in 1896. She died in 1947 and was canonized in 2000.

— Display the pictorial exhibit of the “History of Black Catholics in the Diocese of Charleston.”

— Give copies of “My Little Black Catholic History Book” to children.

Black Catholic history dates back to the Acts of the Apostles with the conversion of the Ethiopian eunuch by St. Philip the Evangelist.

The National Black Catholic Congress notes the importance of the text from Acts for several reasons. It chronicles the conversion of the first black African in recorded Christian history. The text suggests that the man was a wealthy, literate and powerful emissary of the Nubian queen and also a faithful, practicing Jew prior to his baptism and that his conversion takes place before that of St. Paul’s.

Taylor is a reporter at The Catholic Miscellany, newspaper of the Diocese of Charleston.

PREVIOUS: Married priests may be open for debate, but only for Amazon